Stephen Smart had never written anything until he penned an award-winning novel. 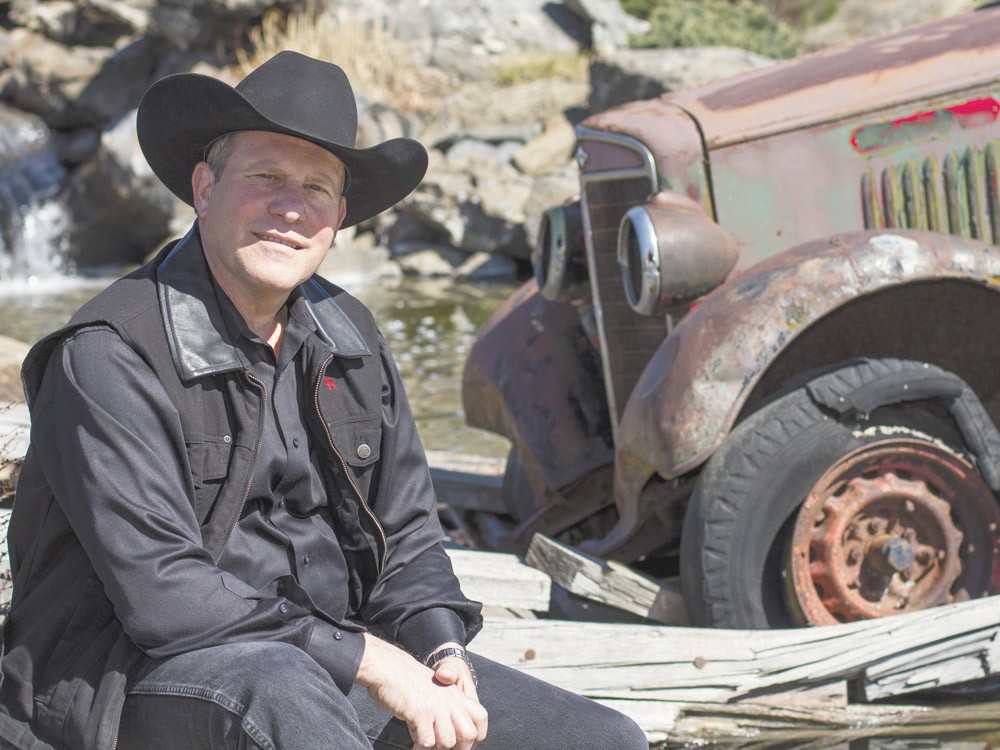 Jeff Ferguson
Author Stephen Smart in front of the 1937 International truck that appears in his novel.
says.

Stephen Smart didn’t know what had spooked his mule on that April day eight years ago. Maybe there was a snake or other critter to the side of the trail cutting through the 60-acre ranch north of Chattaroy that he’d bought as a young man more than 25 years before. He’d taken the mule out on the trail to check it out before he was to sell the animal, but now, something was clearly wrong.

Smart didn’t know that the animal was having a heart attack. Before he knew it, he was looking up at the sky, all 1,400 pounds of the mule rolling over the top of him again and again as the man and the beast cascaded down a hillside.

For the next 20 minutes, he came in and out of consciousness. Smart knew his leg was seriously injured — his foot was resting awkwardly across his lap — and the fact that his calls for help amounted to little more than a whisper indicated that the injuries extended to his chest.

The pain was a hint, but he wouldn’t actually know until later that his leg was shattered in several places, with bones sticking out through the skin, and that his broken ribs were dangerously close to puncturing his lungs. He tried to raise himself to his elbows and shout for help, but all that came out of his mouth was a labored peep. He passed out again and awoke to paramedics carting him off the trail. Apparently, Smart, an accomplished landscape architect, had been found by someone who’d come to fish in one of the custom-built ponds he’d constructed on the property.

Smart spent the next week in the hospital and upon his release would be restricted to a bed and a wheelchair. It was a devastating plight for a busy-bodied engineer with a successful business who’d much rather be packing one of his mules through the wilds of the interior West. He knew he had to do something.

“I realized how close I’d come to not being here anymore and I decided to write a book,” says Smart, now 59, reclining in a chair around a conference table at the offices of his company, Environment West, on the northwest outskirts of Spokane.

The lifelong outdoorsmen had an idea for a novel that drew on his time spent packing and working on farms and ranches as a young man. The problem, however, was that the longest thing he’d written was a six-page term paper back when he was a student at Washington State University. He’d never really even been much of a reader, other than the occasional Louis L’Amour novel he’d take on a camping trip. That’s not to say he isn’t creative — his office is home to a stack of Gary Larsenesque napkin cartoons he creates while waiting for his morning coffee.

“I started developing this story when I was laying there in bed. I had to do something or else my brain was going to get stale,” says Smart.

Over the course of the next seven years, as his body healed and he returned to work and his packing trips, Smart not only put together a novel, Whispers of the Greybull, but also managed to self-publish the work and see it land on the short list of candidates for a Spur Award for Best First Novel, a top honor in the world of Western fiction.

Whispers of The Greybull focuses on Cole Morgan, a former football star at Washington State College, who loses his parents in a freak car accident and decides to reinvent himself as a ranch hand in Wyoming. Set in 1937, the novel features a dusty post-Depression, pre-WWII milieu in an area of the West that was, and still is, very much wild.

Ostensibly a Western novel, Smart’s book uniquely weaves in elements of mystery, historical fiction and even a pinch of the supernatural as Morgan sets out to help the struggling Greybull ranch and unlock a decades-old secret the ranch has swept under the rug.

“For a first-time author, it’s very impressive. He tells a darn good story,” says C.K. Crigger, a fellow Western fiction author who was on the panel of judges that placed Smart’s book as one of two runners up (out of more than 50 entries) for the Spur Award, a distinction bestowed by the Western Writers of America. Coincidentally, Crigger is also from Spokane, which is the setting of her own China Bohannon series.

“The character arcs and the progression of the story are remarkable,” says Crigger of Smart’s novel.

Also remarkable are the characters — namely Smart’s protagonist, Cole, who, as the author readily admits, bears some striking similarities to Smart. Both Cole and Smart graduated from WSU, both played football, both have a knack for engineering and, most noticeably, both of them have been physically beat to crap during their lifetimes. In addition to the accident on the mule, Smart has cracked his back three other times, including during his first practice as a walk-on for the University of Idaho’s football team (he transferred over to WSU shortly thereafter). In the book, Cole is constantly finding himself roughed up, thrown down cliffs and getting in brawls.

Smart acknowledges the similarities between his own history and that of his protagonist. But he quickly makes it clear that he’s no cowboy.

“I’ve spent a lot of time in the woods packing and riding, but I’m nowhere near as tough as a real cowboy that spends all day on a horse herding cattle in Wyoming,” says Smart.

Smart is still at the helm of Environment West, employing more than 60 people working on an array of different landscaping projects throughout the area, and is quick to point out that this is, for the most part, his main focus. But at the end of the day, he is an author and plans to begin work on the prequel to Whispers of the Greybull.

“I don’t know what I’ve done yet. I haven’t sat and suffered for 30 years trying to write something that would get published. I’ve just been led down this path,” says Smart.

Whispers of the Greybull can be purchased at authorstephenbsmart.com.