What a difference full-day kindergarten makes 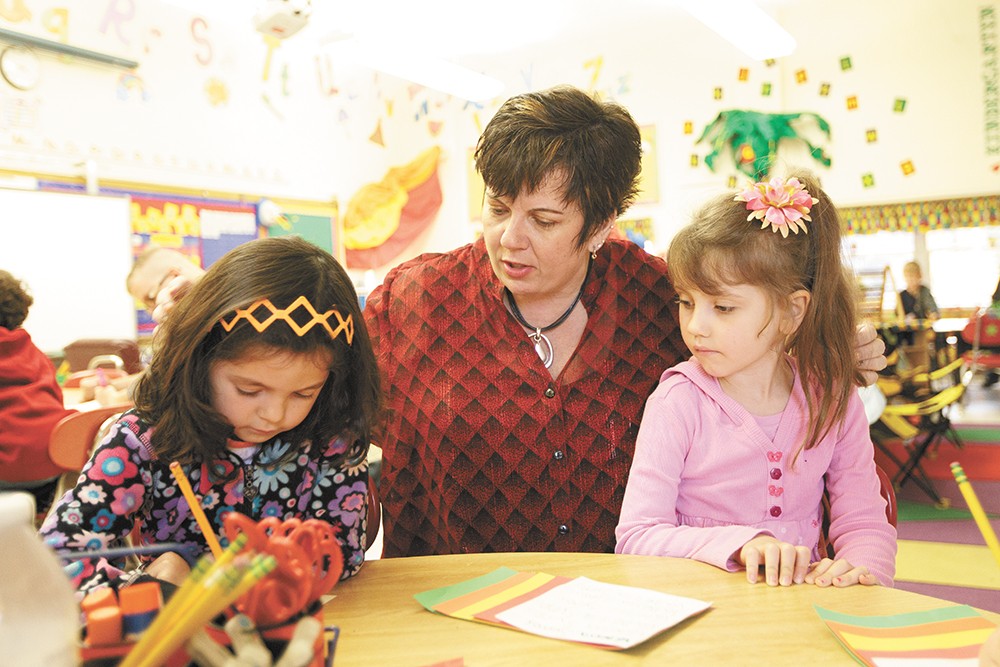 , 5-year-old Olivia Allen squirms in her tiny chair, swings her pink shoes back and forth, and unabashedly proclaims her love for kindergarten.

That teacher, Bambi Howe, leads the class in a song extolling the virtues of the color orange: "O-R-A-N-G-E... Orange is what that spells."

Stuffed animals of literary heroes — the Cat in the Hat, Clifford and Pete the Cat — sit on the bookshelves of the Madison Elementary class, as clusters of 5-year-olds gather around tables, drawing letters, writing words and coloring in pictures.

"I think Walt Disney was wrong," Howe says. "Kindergarten is the happiest place on Earth." 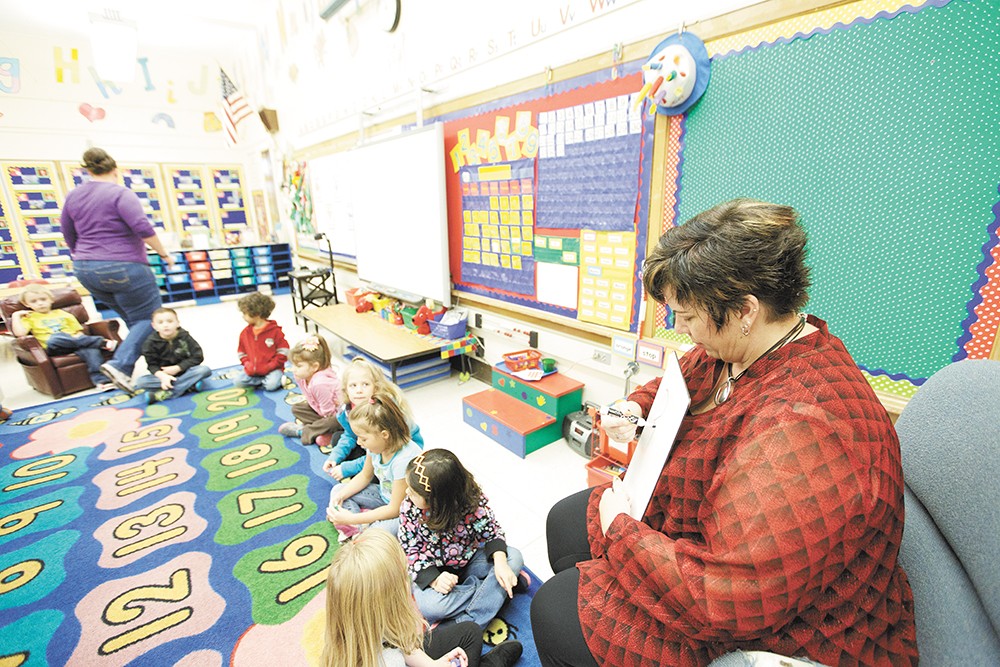 Young Kwak
Teacher Bambi Howe: "If you ask any one of them, they're a genius. And they're right."

When Olivia's big sister, Myah, went to kindergarten, her day only lasted two and a half hours. Starting last fall, the kindergarteners in every elementary school in the district began receiving double that, a full six hours. Teachers now have half the number of kids, and twice the time to teach them.

In a few years, the full-day kindergarten model is supposed to be everywhere in Washington. By 2018, legislation, the state constitution and a state Supreme Court contempt-of-court finding in the McCleary case requires state lawmakers to fully fund full-day kindergarten. Until then, Spokane Public Schools, despite logistical hurdles, has spent $2 million to make up the difference locally.

Olivia loves the six-hour kindergarten day. "'Cuz I like learning," she says.

She's not alone in loving the new model. At the start of the second year of full-day kindergarten, teachers and parents already are beginning to see an impact.

too much from a single year-to-year comparison — it'll take years of data to understand the full impact. Complicating things further, the district reduced kindergarten class sizes at the same time, making it challenging to measure the exact impact. But the results are still remarkable: Every elementary school that moved to full-day kindergarten last year showed improvement in its end-of-the-year Developmental Reading Assessment scores.

That matches national studies that, even after controlling for a variety of factors, show kindergartners with better reading and math scores under the full-day model.

Rocky Treppiedi, longtime school board member and former Spokane assistant city attorney, has been beating the full-day kindergarten drum for about a decade.

"The only surprise to me is that it took so doggone long to get started," Treppiedi says. "We withheld this program from students for far too long."

There are all these programs, he says, in high school and middle school to help students get caught up. Better to invest early to ensure they never fall behind in the first place. "You spend a lot of money when they get into high school, [and] it's too late," Treppiedi says.

Since 2007, Spokane Public Schools has had full-day kindergarten in several low-income schools. But Treppiedi wanted it to be extended everywhere. "They were calling it a poverty program. Baloney!" he says. "It's an education program."

When Shelley Redinger, a former elementary school teacher, became superintendent in 2012, Treppiedi found a supporter. Redinger saw that the district's elementary school students were struggling with reading. And if they couldn't read well, they'd soon be floundering in every other subject. To Redinger, full-day kindergarten was a necessity.

"We just couldn't keep waiting," she says. "I felt we were very far behind."

By 2013, the state legislature's expanded education budget contained funding for full-day kindergarten at 23 Spokane elementary schools and other low-income schools statewide. The school board voted to fund the remaining 12 with local levy dollars.

That's a commitment that not every district has been able to make. In the Central Valley School District, for example, six elementary schools have full-day kindergarten, while the other five offer the option, but only for a fee of at least $315 per month. The Central Valley school board has wanted to offer free full-day kindergarten district-wide but lacks the classroom space. Space has been a challenge for Spokane Public Schools as well. Two new portables have popped up at Madison, partly to handle more kindergarten classes.

Other things have gone more smoothly than expected. Some parents who fretted that their kindergartners would struggle to adjust to longer days have been pleasantly surprised. "I was concerned for my daughter. She's going to be overly tired. She's going to be cranky. We're going to have all these behavioral issues," says parent volunteer Jennifer Ehrgood, whose daughter was in full-day kindergarten last year. "I really thought she was going to struggle. And she didn't. She loved learning."

"I thought she would be bored. That's not the case at all. She's eating it up. She loves it," he says. "She loves learning the ABCs, and the letters and the sounds." Indeed, Olivia rattles them off happily, from A to "next time won't you sing with me?"

The separation anxiety, that flood of tears when parents leave kids in the hands of a stranger, happens either way, Howe says. But now, she says, the kids seem to get over that even faster, as the additional time helps them acclimate.

The benefit for parents is obvious: More time to work, or simply relax, while the kids are learning colors and listening to Dr. Seuss. "For parents, two and half hours of school is a logistical nightmare," Howe says.

The benefit for teachers is obvious

too. Suddenly, Howe's not rushing to get through material. She can focus on the students who struggle, and take more time to let the learning sink in. "It's a so much calmer pace," Howe says. "I can really honor the fact that they're 5. We paint and we use colored sand and Play-Doh and explore and build the whole child."

She has more time to teach social skills: listening, sharing, playing well with others, learning not to hit. They're more confident. "If you ask any one of them, they're a genius," Howe says. "And they're right."

They get a chance to go to music class and have library time. They go to a unique version of gym class that combines aerobics with academics. The kindergartners sing the ABCs while in push-up position, or jump while shouting out vocabulary words. It's the ultimate example of kinesthetic learning, honed for fidgety 5-year-olds. They go to lunch and attend assemblies.

And when they move up to first grade, they're readier than ever. Ellen Rush has taught first grade for 36 years. This year, she's seen a more prepared, confident first-grade crowd.

Ehrgood, who had another child come through first grade, is astounded by the difference.

"Now my daughter is identifying nouns, verbs and adjectives," Ehrgood says. "She teaches her little 4-year-old brother these things. Seriously, my 13-year-old, when he was in first grade, they weren't nearly doing what these kids were doing."

The trick, Treppiedi says, is figuring out a way to prevent those gains from evaporating in later grades. That's where the next reform comes in.

"The next issue is to extend the school day in elementary school," Treppiedi says. The fact that it hasn't happened yet, he says, is "another missed opportunity." ♦