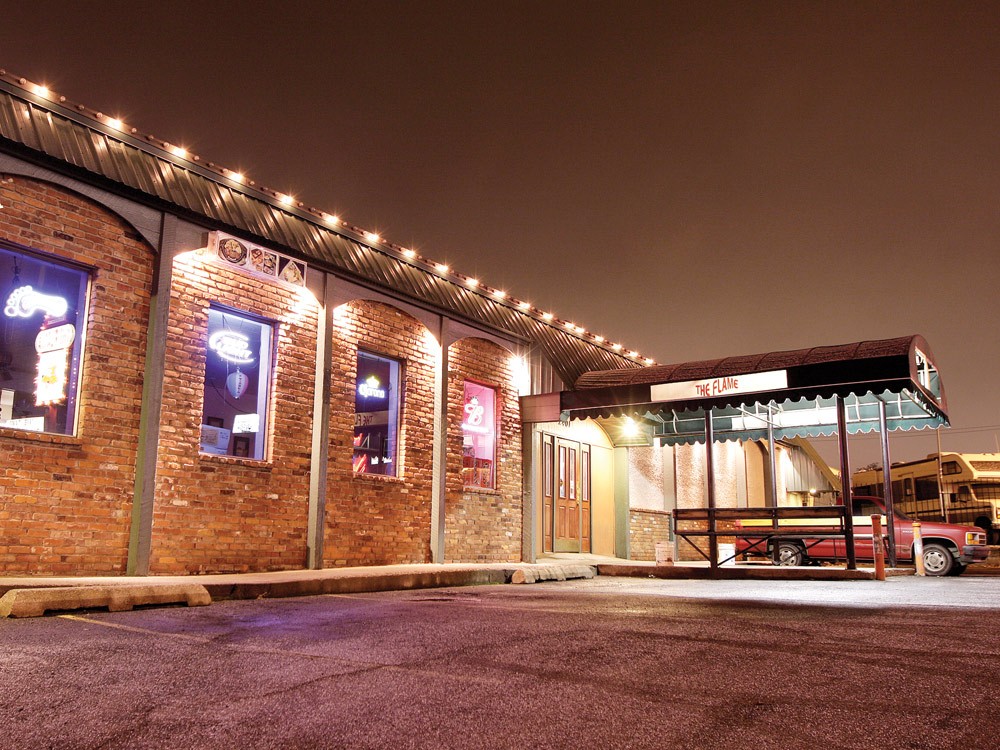 Young Kwak
\"All of the other bartenders come here\" says The Flame\'s Beth Stevens.

Some people would say it’s lonely here at night, but they’d be mistaken.

The roads of East Central snake through a ruddy quilt of factories, auto-repair shops, freeway underpasses, rail lines. Driving around, you feel lost, but that’s all right. Where better to get lost at midnight than in a deserted industrial zone?

In fact, among the crevices of the manufacturing-commercial landscape are refuges sporting backlit signs or blinking lights, places where people gather to ease their pain and celebrate the end of their day. Places like the Flame-n-Fox (2401 E. Sprague Ave.).

Bartender Beth Stevens says she and her ex-lover were driving through Wyoming once when he told her he’d take the wheel so she could watch the fiery sunset.

“I looked back, and we were headed for the ditch,” says Stevens, nearly 30. “He was looking at the sunset, too.”

Stevens now works past sundown at the Flame-n-Fox, a joint on the edge of East Sprague where it begins to taper off into a vortex of industrial-commercial nothingness.

Her bar stays open late, says Stevens, which is a rarity for the neighborhood.

“This is the bar, you know?” she says. “All of the other bartenders come here, Sunday, Monday, Tuesday.”

While Stevens talks, Rush’s “Tom Sawyer” plays on the jukebox, followed by Coolio’s “Gangsta’s Paradise.” The room has a cozy feel tonight, like a pocket bar. That’s because there’s a large room open on weekends for live music but closed off on slow nights so Stevens doesn’t have to baby-sit her more adventurous patrons.

“Somebody could be having sex [back there], I don’t know,” Stevens says, nodding to the closed-off hall.

Stevens isn’t the only one with sex on their mind. A guy across the bar yells out the name of the Rainbow, a must-stop on any East Sprague crawl.

Hung above the rainy sidewalk is a hand-drawn sign reading “Girls Girls Girls.” Inside, a dozen guys and a dancer or two mill around or camp out at the bar.

The bartender, an older woman, checks driver’s licenses with a magnifying glass and says “Happy Valentine’s Day” while cashing a tab. On stage, a woman strips to that Everlast song, “What It’s Like.”

PBR is served by the can. It costs $5.50 for a soda and a Shock Top. Other than what look to be a couple of regulars, most of the men here tonight ignore the women. Some drink at the bar. Others shoot pool.

Once you’ve satisfied your carnal urges, indulge your naughty stomach. Hang a left outside the Rainbow and hit Vien Dong (1730 E. Sprague Ave.) for a bite to eat. A tasty banh mi costs less than $5.

Or, if you’re jonesing for some chicken wings, head back a little further toward downtown to Jones Radiator (120 E. Sprague Ave.). It’s a nice, warm bar where professional-looking folks take their after-the-office beers. Tonight, in fact, they’re watching a Zags game on a wall-sized projection screen. Try the spicy chicken wings while you’re at it. They. Are. Delicious.

The Flame-n-Fox (2401 E. Sprague Ave.) has an epic CD-driven jukebox. No digital cheating here, just a massive catalogue of Top 40 and classic rock. The Who, Janis Joplin, Bob Dylan and just about every NOW! Compilation ever produced. Bonus touch: track lists written on paper.

The smell of weed drifted through the room when we visited here one afternoon at the Checkerboard Tavern (1716 E. Sprague Ave.). I don’t know where it came from, I don’t ask. And nobody bothers me, so it’s all good. The tall-back booths are gone, regrettably, but this Spokane icon is still a great place to kick back.

If you want fancy beers, you should probably be in another neighborhood. But if you really must indulge your bourgeoisie tastes here, head on over to Budge Brothers Brewing Company (2018 E. Riverside Ave.). Spokamber Ale, Orangutan Pale Ale, Hop Train IPA, they’ll take care of you.

Bingo is like the bacon of board games. This gig was created to help fund Spokane Youth Sports Association events, the bingo hall (2230 E. Sprague Ave.) here is open Monday, Wednesday, Friday, Saturday and Sunday. Go indulge your wicked gambling impulses with three full rounds of bingo each night.