International flair in Post Falls. Plus, a touch of David's on the South Hill.

By Carrie Scozzaro and Kirsten Harrington 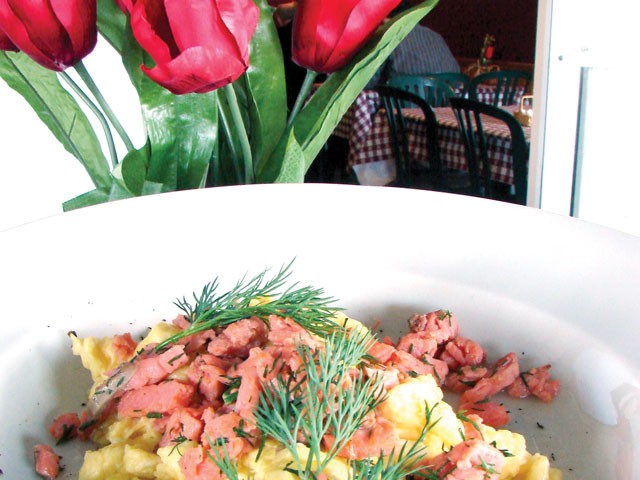 You've cooked for every level of Dutch government, including Queen Beatrix herself. You’ve been head chef on a North Sea oil rig and had more than 30 years of restaurant experience throughout Europe.

What do you do for an encore? Open a humble little eatery in Post Falls, Idaho.

And you call it WOODEN SHOE — an homage to your beloved Holland, home of windmills and tulips against an impossibly blue sky. Holland, however, is just a jumping-off point for chef Jan Dirk van der Kolk, who includes cuisine from France, Germany, Austria, Ireland, Spain, Switzerland and Russia on his menu.

Lunch is a curious assortment of American classic sandwiches and salads, with van der Kolk’s twist (like powdered sugar on the Monte Cristo). Pita Shoarma, however, is a chicken-stuffed pita with cucumber salad and garlic sauce ($6.25), seeming very Mediterranean, while the shrimp satay and stir-fried noodles in the Bami Goreng ($8.75) is Indonesian.

But that diversity, actually, is typical of Dutch food, reflecting the conglomeration of culinary influences on this small coastal country. It’s also part of the inspiration for the Wooden Shoe’s planned dinner menu ($12-13), slated for spring release, which celebrates Russia (stroganoff), Spain (paella), Ireland (stew), Austria (schnitzel), and more. Once they obtain their liquor license, Wooden Shoe will pair each dish with beer or wine from the corresponding country.

Featured countries also appear in the décor, with representative flags and photos on the wall. Otherwise, the diner interior is non-descript and casual.

Above a window into the kitchen hangs a sign: Eerlijk is Heerlijk it says. Honest food is good.

A familiar garlicky aroma wafted through the air as I walked into FAMOUS ED’S three days after it opened. There wasn’t a seat left in the house. Apparently, the word is out that the South Hill’s newest eatery is serving David’s Pizza.

The crowd was a diverse mix of beer buddies watching the game, girlfriends enjoying a glass of wine, and families with kids. About two-thirds of the 100-seat restaurant is bar seating; before 10 pm, the remainder is open to all ages.

Famous Ed’s, located in the old Hangar 57 space near 57th and Regal, is a joint venture between Mark Starr (owner of David’s Pizza) and Fast Eddie’s owner Dale Kleist. The walls of this family-friendly sports bar are covered with TVs and pictures of celebrity Eds: Eddie Murphy, Ed Sullivan, Edward Scissorhands. It gives the place a fun, quirky kind of feel.

The high ceiling, open floor plan (with a view of the kitchen) and tons of windows make Famous Ed’s light and cheerful. There’s a roll-up door off the bar leading to a patio for summer dining.

In addition to pizzas ($13-$26), the lunch menu contains a couple of sandwiches and salads ($9). The meatball sub is a winner: crusty, hot bread stuffed with meatballs, a chunky, zesty marinara and plenty of oozing melted provolone. The accompanying minestrone soup was chock-full of veggies and fresh herbs.

The dinner menu offers several appetizers and a half-dozen hot dishes ($10-$17), including spaghetti and meatballs, chicken Parmesan, and an Asti-style salmon baked in sparkling wine. There are about a dozen draft beers to choose from and many reasonably priced wines ($5-$6 a glass).

Famous Ed’s is starting off with an abbreviated menu that Executive Chef Kile Tansey (formerly of ella’s Supper Club) plans to triple in size with more pastas, sandwiches and burgers. Stay tuned.