Acupuncture is thousands of years old, but science still hasn’t made up its mind 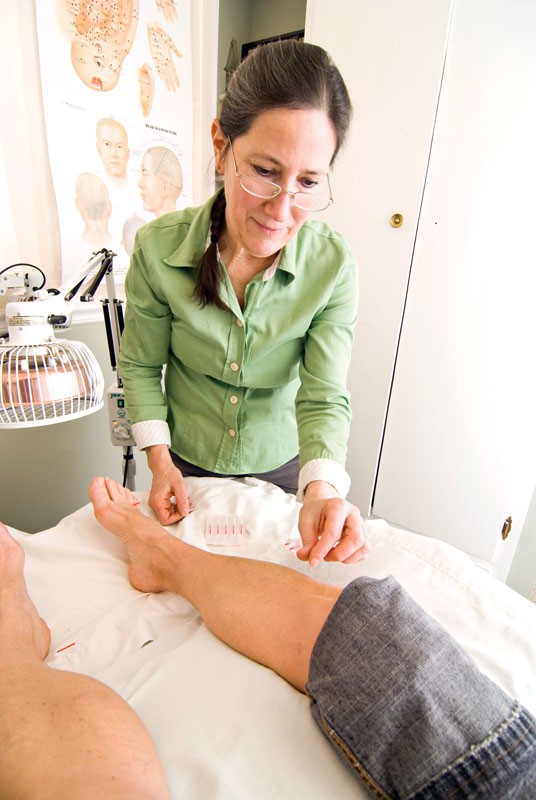 Tammy Marshall
Acupuncturist Jennifer Gallis at work: "Im thinking about [the patient] as a whole. Its not just a cookbook prescription for everyone."

“I want to do Gallbladder 34 for the tendons,” Jennifer Gallis tells her patient, Jeanann Eckert.

Wearing a tie-dye T-shirt, Eckert is on an acupuncture table at Gallis’ Spokane clinic, her pant legs rolled up. Gallis moves to the right side of Eckert’s body and feels the outside of her patient’s right leg, just below the knee. She taps on a small plastic tube encasing a thin, silver needle and the needle darts in.

Eckert is a patient, but she’s also a practicing acupuncturist. So when she goes to Gallis for treatment, the two — who share a common knowledge and language — talk shop as the treatment unfolds. Eckert suffers burning leg pains from a car accident she was in a year ago, and she recently had a pin inserted into her hand after falling on ice. She sees Gallis about once a month now, for her pain and also just for tune-ups.

Eckert is one of a small but growing number of acupuncture patients in the United States, where the practice has been rising in popularity for decades. Eckert thinks it has become more accepted and more widely used in Spokane as well. She estimates that when she started here in 1995, she was the seventh practitioner. Now there are about 27 in town.

But a number of new studies question the validity of the ancient Chinese medical practice. One such study, published in the September issue of Arthritis Care and Research, found no difference in pain reduction between patients who received real acupuncture — with needles placed at specific acupuncture points — and those who had needles inserted more randomly. It did find differences, though, when the care style of the practitioner (that is, how the practitioners set up patient expectations) varied, suggesting that the placebo effects of acupuncture had a powerful effect.

Another study, from the University of Michigan Medical School, compared the results of real and “sham” acupuncture among fibromyalgia patients. The study found that both treatments had pain-relieving effects but the mechanisms in the brain leading to pain relief were different, suggesting that real acupuncture isn’t merely a placebo.

“It opens up a whole avenue of research,” says Richard Harris, the lead researcher for the study. “It says that acupuncture works differently than sham, [which has implications] if you want to make acupuncture work better in some way.”

But Galllis says the studies are misleading, because the real acupuncture practiced in trials was generalized, not customized to the individual needs of the patients. In traditional acupuncture, the needles are placed at specific points along “meridians,” or energy channels that practioners believe connect to different organ systems. Which meridians to tap depends on each patient and where they need relief.

“I’m thinking about Jeanann as a whole,” Gallis says of her patient and colleague. “What her constitution is, what’s going on with her. That’s the beauty of it. It’s not just a cookbook prescription for everyone.”

For years, Michael Lourey suffered from frequent migraines — four or five per month when he was on prescription medication, and 15 to 20 when he wasn’t. He found some relief with the drug Imitrex, but the migraines were still interfering with his life.

About two years ago, Lourey heard from a friend about how acupuncture had cured her breathing problems, so he and his wife looked into it. Lourey, a self-described cynic, says he wasn’t interested in any aspects of Eastern religion — just the treatment. He promised his wife he would go see Gallis for at least a month, though he wasn’t hopeful.

“The first time I went, I remember thinking, ‘Well, sticking pins in me is gonna make a real difference…’” Lourey recalls, sarcastically.

After that first month, Lourey was completely free of headaches. He’s now been off medication for a year and a half and hasn’t had a migraine in two years. His breathing isn’t perfect, but the problems are diminished.

Stephanie Schmidt, an acupuncturist in Spokane, says many in the Western world misunderstand the model of Chinese medicine. Having studied biology in college, Schmidt researches her treatment from both perspectives, in part so that she can explain it to patients in terms they understand. But the language and the methods for understanding the body are very different.

Schmidt recently started practicing cosmetic acupuncture — something of a new trend — in which needles are inserted shallowly into the face. In theory, the needles cause microtears in the skin, bringing collagen and elastin to the surface. In the language of Chinese medicine, the treatment brings chi to the face, toning the organs that support your skin.

“You notice it on the face,” Schmidt says, “but you also benefit overall.”

Sheila Sanders, a patient of Schmidt’s, had an experience similar to Michael Lourey’s: She started acupuncture for one symptom but received all-over benefits. Tension headaches had plagued Sanders for seven years, on and off. Her doctor prescribed massages and physical therapy but nothing seemed to work. Gallis, Eckert and Schmidt all say this is typical — that most patients come to them as a last resort, after having tried everything else.

“The results were almost immediate,” says Sanders, who recalls going to Schmidt with a case of bronchitis. “Stephanie said, ‘I can take care of that bronchitis.’ She put a needle in the crease of my arm and I remember standing in the kitchen [later that night] and my lungs were cleared.”

Sanders then started receiving cosmetic treatments. She says that afterwards, her face felt tighter and had a nice glow to it.

“It’s not like you’re going to go in being 60 and look 30,” Sanders says, noting that, after treatments, her friends ask her if she’s been tanning.

“When you get the treatment, the weird thing is that it gives you an endorphin rush,” Sanders explains. “You have that overall good feeling and it lasts for quite a while.”

Michael Lourey and his wife have become close friends with Gallis since he started the treatments — even forming a health-strategies partnership with her. He has cut back on the number of treatments he receives, but he still tries to go once a week.

“I don’t know if I would get the migraines back if I stopped going,” Lourey says. “But I’m not willing to find out.”