A young developer wants to bring New Urbanism to the Spokane Valley. But she needs everyone's help. 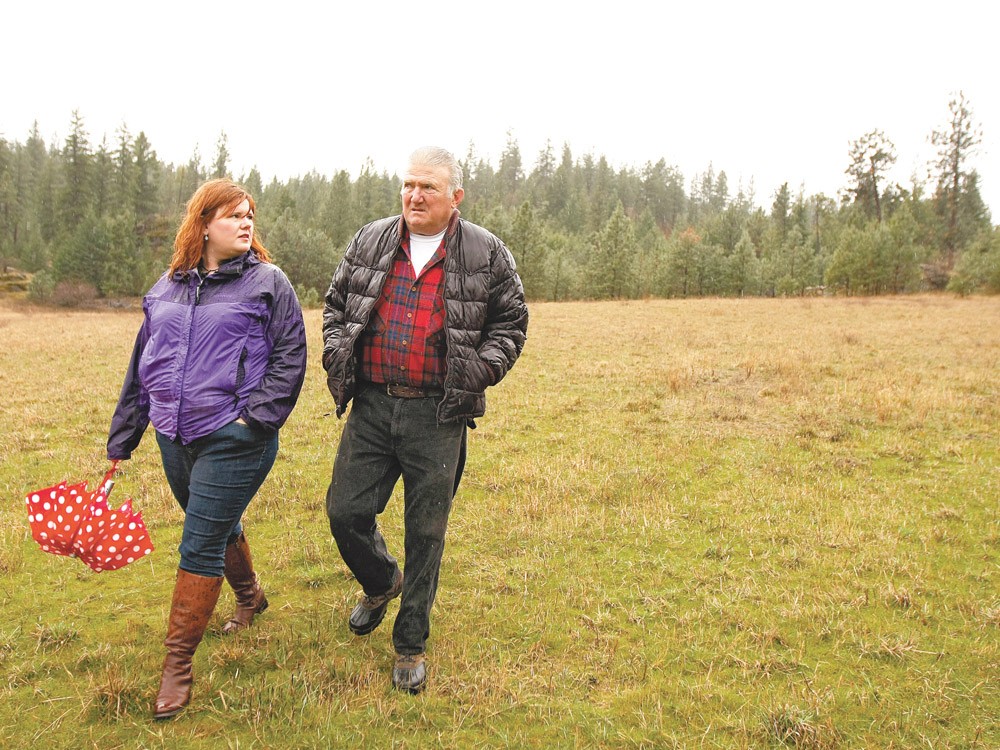 The land rises until the field becomes a hill. It rises until the trailers and split-levels lining its north end give way to the McMansions bordering its south. It rises away from the infrastructure of the Sprague/Appleway couplet until the roads become dirt and the communities become gated.

This is the land Cassie Price’s family homesteaded.

For nearly 100 years, her ancestors have owned various parcels of this ragged rectangle until, in 1991, all 195 acres came to belong to her father, Ross Taylor.

It is this land — the largest spit of dirt left in Spokane’s urban growth boundary — that Price and Taylor want to develop into a low-impact, mixed-use, cooperative-built, neighbor-focused, LEED-certified green community. It is land she and her father are in danger of losing altogether.

If things go to plan, in a little under a month, father and daughter will have raised the $2.5 million they need to shore up their debt and begin a project that they believe will create a neighborhood akin to Browne’s Addition or South Perry just off Park Road near the Dishman Hills Natural Area. If things go to plan, you — 26,000 of you, whoever you are — will have pitched in some cash.

If things do not go to plan, in a little under 45 days, Taylor’s lender will seize the property.

And while father and daughter talk about their last-ditch effort with the conviction of believers, both acknowledge that nothing has gone to plan in a long time.

At the turn of the century, the family’s land supported a pig farm, a dairy, a slaughterhouse, a rendering plant and an illicit still for moonshine in the woods above the valley floor. Price’s grandfather was born on this land in 1916. His parents were among the six original families that settled the area. Her grandmother and her great-grandparents came in 1928, from up the hill in Chester.

The land is still out of the way, but it’s also within the urban growth boundary. From here, it is only three minutes to Millwood and 11 minutes to downtown Spokane. Park Road already has a bike lane. “We didn’t even have to ask for it,” Price says.

Taylor says the neighbors are still friendly, the way they were when he was growing up. It was a community back then. It ceased to be a community, Taylor says, “when everything got cookie-cutter.”

The man has, for decades, wanted this to be a community again. Price says it wasn’t necessarily a green project that percolated in her father’s mind all those years, but “he’d always envisioned a mixed-use village sort of thing.” A development not just with houses and streets but with sidewalks and trails and a little stream with a bridge over it and lots of common spaces. A development with a town center — restaurants, cafes, offices — a place where people could live, work and play and not need to drive. Price wants the buildings to have a net-zero energy footprint, meaning they make as much energy — with solar power and geothermal — as they use.

The land here — the 195 acres owned by the Taylors and another 19 kicked in by like-minded neighbors — can support 1,100 units of residential. Price wants to cap it at 700, leaving the rest of the space for commerce, recreation and gathering, open to anyone.

That’s the dream. Then there’s the reality.

In November 2006, Taylor borrowed $2 million to get his dream off the ground. He began plans for Phase One of construction, engineering and infrastructure. By 2008, there were signs that the market was starting to collapse. That spring, Taylor’s health started to go with it. He got pneumonia in May, then suffered two pulmonary embolisms in July. “You’re apparently not supposed to survive those,” Price says.

He signed over power of attorney to his daughter, but her focus for the next few months was caring for him. They were paying $20,000 a month in interest on the loan, and when her attention turned back to the project, she realized the money that was supposed to get them through building infrastructure wasn’t even enough to start.

But that’s their main reason for wanting to create a town center. Taylor and Price want to draw people to their community whether those people live in it or not. But that might be a problem. Jim Frank of Greenstone Homes worries, without having specific knowledge of Taylor’s plans, that the area around the development doesn’t have the density to support a lot of retail. Regardless of how utopian and beautiful the plan, he says, “You still have to use the normal principles of retail development.” That means several thousand households within a mile radius of a grocery store, for example.

Proponents of New Urbanism — which values walkable, compact, mixed-use development — say that you can get by with lower density in areas where people are committed to driving, which people in the Valley certainly are. Wal- Marts in the Dakotas draw people from 100 miles away. Taylor and Price just need to draw them from five or 10, where there are 70,000 and 140,000 households, respectively.

Price thinks that’s not unreasonable. She thinks their land can become a magnet for folks in Opportunity and Millwood and maybe even Greenacres and Lincoln Heights.

“There are a lot of people hungry for community,” she says.

For four years, people have been telling Taylor and Price that their dream is a good dream, if it wasn’t for the reality of things.

A market analysis conducted by RCLCO, a national firm that advises on real estate and development, rated the project an “A-” overall, saying that a “master-planned community that follows the theme of sustainability” would do exceedingly well at the price points that Price and her father have worked out. It rated the project favorably against all other comparable projects in Spokane and the Valley, including Greenstone Homes’ River District development.

Greater Spokane Incorporated issued a report last week saying that the Taylor project would create jobs in the area’s green sector. The chamber of commerce estimates the housing aspect of the project alone will bring nearly $180 million in economic activity. The mixed-use and retail side of the plan — which is years off — would add close to another $2 million, along with 25 new jobs and over $500,000 in salaries.

Local green builders and architects are excited about it, too.

While the location worries him, Jim Frank says the commitment to building common space is a smart one. People have begun to see the value of sacrificing a little private space for greater public space, and the people who like the idea — Generation Y and retirees — are the fastest-growing segments of the housing market. “You don’t walk your dog in your yard, you walk your dog on the trail with your neighbor,” Frank says, “It’s not for everybody, but a lot of people like that value proposition.”

Gavin Tenold, the owner of Pura Vida Homes, a sustainable builder, says, “I’m excited to see someone step up to the plate and attempt to use energy efficiency in the development model rather than just the construction side of things.” He says he’s not worried about a project like that taking off in this economic climate. He started Pura Vida just as everything went to hell. Tenold says it has grown “completely because we offer energy efficiency.”

Everyone who needs to believe in Taylor and Price’s project for it to succeed already believes in it. Everyone except the money people.

The list of people Price has approached to invest since 2008 runs on for three pages. “[I’ve talked to] brokers, banks, investment bankers, people on the Forbes [100] list,” she says, “I’ve written letters to Brad Pitt. ... I can’t believe he never got back to me.” Most of them say the same thing, she says. “It’s, ‘Cool project, too bad it’s right now. Wait five years.’” But Price and her father don’t have five years. When people say no, they say it “like they know I’m going to lose [the land] and any other thoughts are delusional,” Price says.

After all this, Price believes her last shot to save the family homestead is you. This week, started a funding drive on IndieGoGo, a crowdsourcing site like the ultra-popular Kickstarter. She is looking for $2.6 million dollars (the $2.5 million she needs plus the $100,000 the site will take as commission). Representatives for IndieGoGo have told her that the average donation she should expect is $100, which means she’s looking for 26,000 backers.

The conventional wisdom of crowd-sourcing is that 1 percent of everyone who sees your campaign will donate to it, which means Price needs to get 2.6 million sets of eyes on it.

Under normal circumstances, Price says, it’s not a good idea for developers to talk publicly about their problems. So much of getting financing is about lender confidence. She has already been turned down by everybody, though. There’s no one left to say no.

And so, although crowd-sourcing a housing development is not a traditional path, it feels like the only one left to her.