Economic anxiety among voters is a sign of vulnerability for Trump 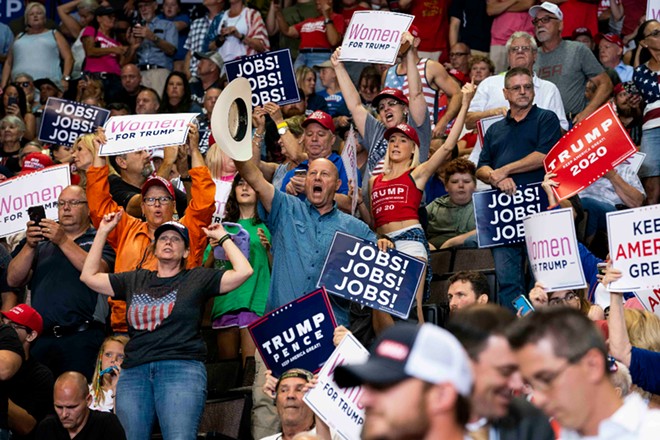 Doug Mills/The New York Times
Attendees at a rally for President Donald Trump in Cincinnati, Aug. 1, 2019. Americans’ confidence in the economy is fragile, with a majority of voters expressing concern — a potential vulnerability for Trump if the current economic slowdown worsens before next year’s election.

By Ben Casselman and Jim Tankersley
The New York Times

Americans’ confidence in the economy is fragile, with a majority of voters expressing concern — a potential vulnerability for President Donald Trump if the current economic slowdown worsens before next year’s election


The stock market tumbled last week after bond prices flashed a signal that has historically been a predictor of recessions. Stocks later rebounded, but that episode, combined with other data suggesting an economic slowdown, has contributed to increasingly dour forecasts from many economists.

But even before last week’s swings, voters were expressing doubts about the state of the national economy, according to polling conducted by the online research firm SurveyMonkey for The New York Times earlier this month.

Nearly 3 in 5 respondents to the survey said they were worried about the economy, regardless of whether they were personally struggling or doing well financially. That group cuts across party lines and encompasses a large group of voters who could collectively sink Trump’s reelection chances, including 3 in 10 Republicans and 7 in 10 independents.

Leah Proffitt, a 60-year-old Air Force veteran in Tucson, Arizona, is a registered Republican who appreciates Trump’s business experience. But she is worried about the rising government debt, thinks big businesses have too much power and isn’t convinced that the economy is as good as official statistics suggest.

“I have a house, I’m not out on the street, I’ve got a job,” Proffitt, who works in air quality for the local Air Force base, said in an interview. “We’re doing OK. But I don’t know that overall things are that good.”

Proffitt, who voted for Trump in the 2016 primary but for Hillary Clinton in the general election, said she wasn’t sure how she would vote next year. Right now, she said, the economy is not her “focal point” because she has a solid job. But if the economy turns south, that could change.

Consumer sentiment — as measured in both the Times poll and in several long-running surveys — remains relatively high, particularly among Republicans. Polls continue to show that voters approve of Trump’s handling of economic issues more than of his job performance overall.