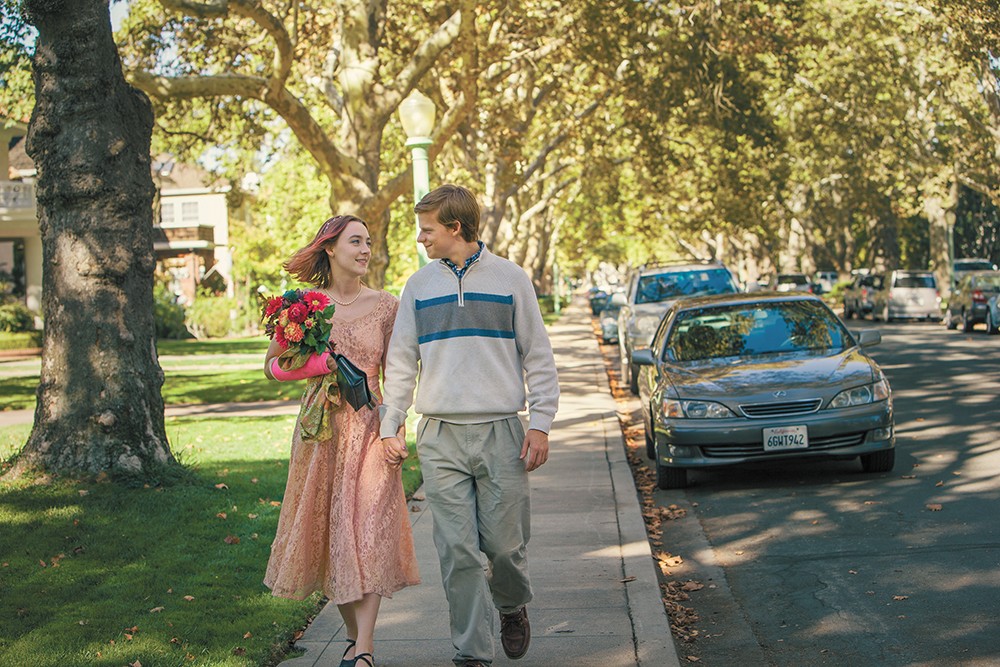 Saoirse Ronan (left) is Lady Bird because she says so.

and rites of passage as most coming-of-age films, but it's told with the kind of clear-eyed emotional insight that you don't often see in movies, let alone the ones about teenagers.

It's a comedy, I suppose, in the sense that we find ourselves laughing often, mostly in recognition of the truths it reveals. But it's also a serious consideration of what it really means to grow up, and its most painful moments carry with them the sting of autobiography.

The film's titular character, played by Saoirse Ronan in a performance of tempestuous energy, is entering her senior year at an all-girls Catholic school, where she's the kind of student whose fierce intelligence begets academic laziness. Her real name is Christine, but she considers Lady Bird to be her given name because, well, she gave it to herself. That's one of the many ways in which Lady Bird is bound and determined to appear staunch, to get everyone around her to subscribe to the narrative she's created.

She's trying so desperately not to appear totally lost, unaware that everyone around her, including the adults, is just as lost as she is.

Lady Bird wants to escape her hometown of Sacramento, to run from the stucco-colored sprawl of the California suburbs and into the embrace of an East Coast liberal arts college where everyone is smart and worldly and reads only the best books. It seems a universe away from the less-than-affluent neighborhood where she's always lived; her parents (Tracy Letts and Laurie Metcalf) encourage her to apply to a less expensive, nearby university that's too sensible to be cool.

Gerwig's script doesn't cohere into a standard narrative, instead jumping from one vignette to another, starting in the fall of 2002 and ending in the summer of the following year. We watch as Lady Bird prepares for the school production of Merrily We Roll Along, gets high for the first time and finally gets her learner's permit.

She starts dating the most charismatic drama kid (Lucas Hedges from Manchester by the Sea), but then she sets her sights on the floppy-haired musician (Timothée Chalamet, Call Me by Your Name) who smokes cigarettes and denounces capitalism. She's perhaps most herself around her best friend Jules (Beanie Feldstein, a real find), particularly when they take the long way home from school past the opulent houses their families could never afford.

It's little details like that which separate this film from others of its ilk, and it extends its sense of specificity and empathy to everyone who floats into Lady Bird's orbit. All of Gerwig's supporting characters, even the seemingly inconsequential ones, have rich inner lives: Lady Bird's older brother and his live-in girlfriend, estranged from her own parents; the school's theater director, struggling with depression; the rich girl Lady Bird longs to befriend; the Mother Superior (Lois Smith) who points out that Lady Bird's perception about her own surroundings comes from a place of affection.

Metcalf in particular is wonderful as the mother with whom Lady Bird shares an often prickly rapport. She's the household's sole source of income after her husband loses his job, and she's both warm and imposing. The film's opening scene nicely encapsulates how she and her daughter pinball between civility and turbulence: One moment they're crying together over an audiobook of The Grapes of Wrath, the next Lady Bird is throwing herself from a moving car in revolt. It's one of the most authentic, bittersweet, complicated parent-child relationships I've seen in a movie.

I adored Lady Bird. I suspect you will, too. It is a film of generous spirit, a film with a distinct personality, a film in which one scene after another zeroes in on the essence of its characters, a film that overflows with compassion for everyone in it. Gerwig, best known for starring in and co-writing generational comedies like Frances Ha and Mistress America, has here produced a script that's sharp about the messiness and unpredictability of life, and about the time in our lives when our emotions are running at their highest and yet we have no idea what to do with them.

This is an unapologetically big-hearted movie, and what a rarity that is.♦

Lady Bird is not showing in any theaters in the area.