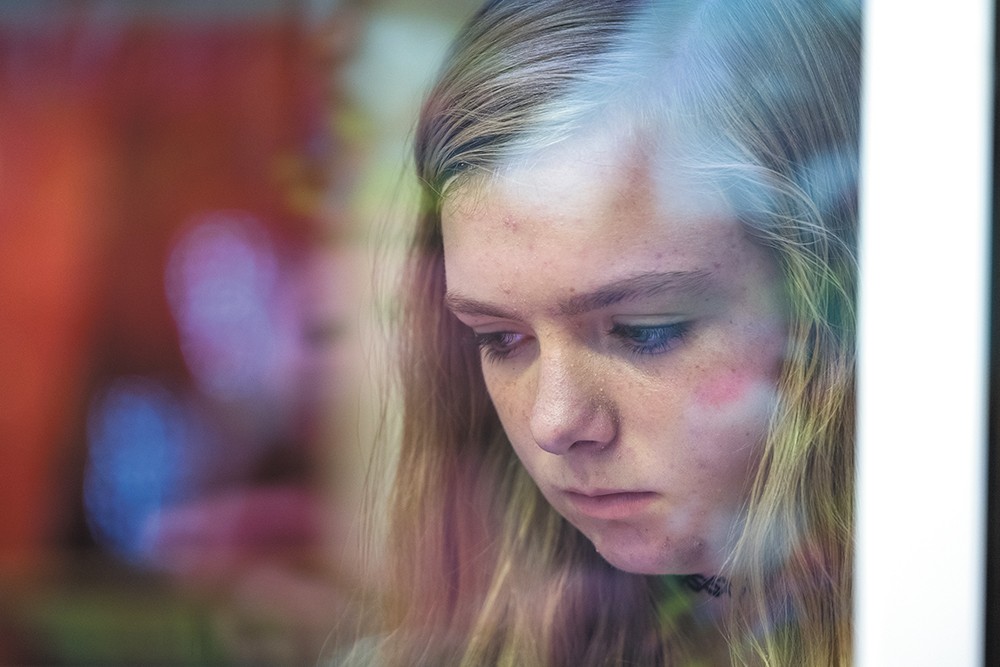 this edition of her barely-viewed YouTube vlog via her fuzzy webcam, you can, like, totally tell that she's less than, like, 100 percent confident in her delivery of this motivational poster-esque monologue about how to, like, just be yourself. Twitches of anxiety cross her acne-blotched face as she checks her notes and insists that while some people at her middle school might think she's, like, totally shy, she's actually, like, super talkative when given the chance. Once she gives her signature sign-off ("Gucci!"), you can feel the full-soul exhale of making it through another performative moment.

Eighth Grade follows Kayla (Elsie Fisher) on the bumpy road of the last days of middle school — that unpleasant phase between childhood and young adulthood — in the hyper-connected modern world. Unlike many musings on contemporary teens, every moment of the film feels real — authentic and grounded.

That's all thanks to a next-level naturalistic performance by Fisher as Kayla. You believe every moment of shyness she bluffs away, the joy she experiences when she sings karaoke, the internal squirm when her overly caring dad tries to talk to her at the dinner table, the heart-stopping mental scramble when her crush notices her and the difficulty of being performatively upbeat for social media when she's down in the dumps.

The movie avoids the ubiquitous trap of getting technophobic. Instead of making Kayla's social media obsession seem like a ruinous evil, it's treated like the relatively normal thing that all kids her age actually do without thinking. Perhaps this treatment shouldn't come as a surprise, as Eighth Grade is the feature writing and directorial debut of Bo Burnham, one of YouTube's earliest stars. The filmmaking on display here belies the young writer/director's experience: There are gorgeous framings, impressive long shots and challenging juxtapositions (like placing one of the raciest flirtation scenes in the middle of an active shooter drill, because the kids are numb to the horror of such a thing).

While Fisher's Kayla does the heavy lifting, the entire cast consistently hits the right notes. Josh Hamilton excels as Mark, Kayla's unintentionally goofy, overly supportive father. His likeability is off the charts, as his love somewhat blinds him to his daughter's awkwardness. Burnham doesn't try to tell the family's full life story in the short time frame, but the performers' moments of pause and wheels-turning-in-the-brain looks tap into the unspoken pathos of things that happen off the screen (like the lack of a maternal figure) making Mark and Kayla rich with depth. Kayla's peers all fit their roles without feeling like clichés: There's Kennedy (Catherine Oliviere), the stuck-up popular girl whose face is awash with disgust at the very idea of Kayla; the completely vapid sext-driven hunk, Aiden (Luke Prael); and Gabe (Jake Ryan), the spaztastic oddball who makes Kayla look chill by comparison.

Given Burnham's musical background, it shouldn't be a shocker that Eighth Grade expertly employs its soundtrack and sound mixing. Electronic composer Anna Meredith's catchy score captures a bounding modern energy without feeling like it's too hard to capture the current moment, and the jarringly blaring dubstep-esque drops that accompany Kayla's first person slow-motion oglings of Aiden are masterful.

What sets Eighth Grade apart from its coming-of-age cinematic peers is Burnham's uncanny ability to convey empathy in every frame. It's a pure slice of life, where even the jokes seem unforced. As viewers tag along with Kayla's restrictive narrative, her classmates may be ignoring or dismissing her, but the film itself is never casting judgement. When Kayla finds herself in a perilous situation in a vehicle that seems like it's slowly going in a horrific, skin-crawling direction, the audience feels the same epic "oh please, no" discomfort as the protagonist. When Kayla bemoans, "I could be doing nothing and I'm just nervous," you just want to give her a supportive hug and tell her things are going to be OK.

Eighth Grade is the best because it fully captures how eighth grade is just the worst. ♦

Eighth Grade is not showing in any theaters in the area.