Cold, cerebral and epic in scope, Blade Runner 2049 is a worthy, visually stunning successor to a sci-fi watershed 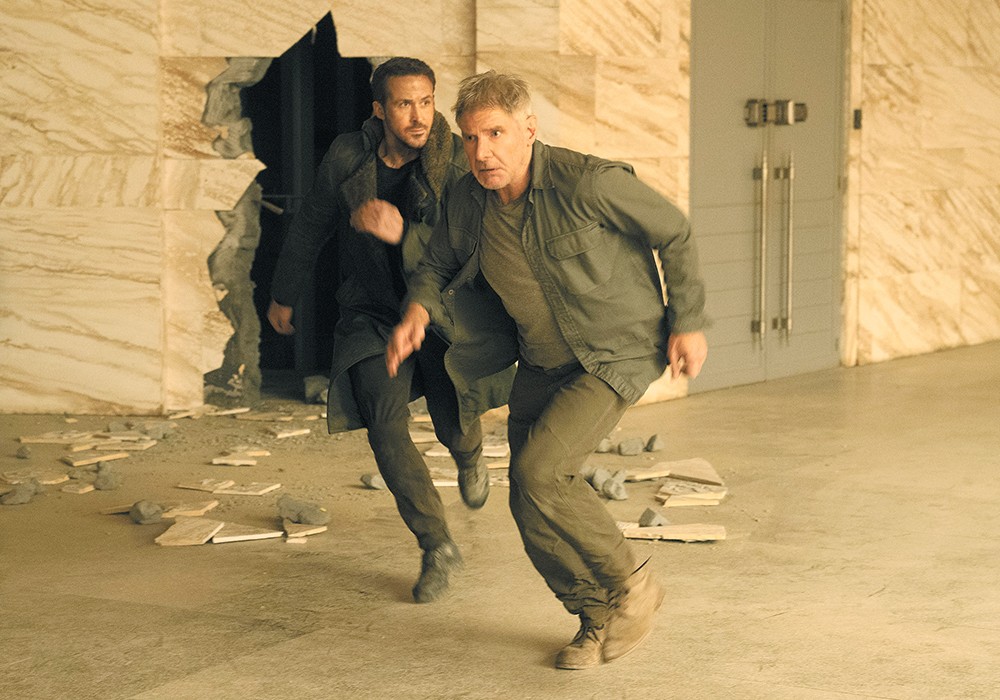 Real or replicant? Ryan Gosling and Harrison Ford get to the bottom of things in Blade Runner 2049.

How appropriate that Blade Runner 2049 should turn out

to be something different than it initially appears. This is an introspective, cold, leisurely paced arthouse film disguised as a big-budget franchise cash-in, one that often gets lost in its own thoughts, drifting off in a reverie of some of the most stunning visuals ever projected. Even more so than its 1982 predecessor, it's science fiction as meditation.

Long-awaited follow-ups like this don't typically inspire confidence, particularly when leapfrogging off a film as beloved as Ridley Scott's landmark original, a critical and commercial disappointment that became one of the most influential films ever made. And yet 2049 is the best kind of sequel: It works on its own terms, but it reverberates with echoes of its forebear. It's a monument to what came before it, bowing its head in reverence while branching out in new, strange directions.

And it continues to explore themes — the nature of identity, the unreliability of memory, the tenuous link between humanity and artificial intelligence programmed to think it's flesh and blood — that made Scott's film such a heady enigma, deepening and enriching the original's much-debated central mystery. You'll leave the theater with plenty to talk about.

Picking up 30 years after the action of the first film, the screenplay (co-written by Hampton Fancher, a contributor to the original) follows an LAPD officer known only as K (Ryan Gosling), a so-called "blade runner" responsible for exterminating an outdated model of synthetic humans called replicants.

K's raid of a replicant-run farm turns up a long-buried skeleton of a woman who died in childbirth, and that morbid discovery starts him on a trail that may or may not involve the fabled Deckard (Harrison Ford), a former blade runner who went missing back in 2019. (It should be noted here that if you haven't seen the first Blade Runner, you'll most likely be lost.)

2049 is a big movie in every respect. Its world is so expansive that we practically sink into it. Dozens of vivid supporting characters flit about its margins. It's an epic at 164 minutes, and yet it doesn't ever lag, even as it allows itself plenty of room to breathe. It was directed by Denis Villeneuve, the most adventurous genre filmmaker currently working within the Hollywood system. Like his brilliant and beautiful alien invasion drama Arrival, this film is almost zen in its pacing, which gives us the time to scour every corner of the screen.

Villeneuve has again collaborated with the great British cinematographer Roger Deakins, who has shot some of the most beautiful films of the past few decades (Fargo, The Assassination of Jesse James by the Coward Robert Ford, Villeneuve's Prisoners) and yet may have outdone himself here. Nearly every painstakingly constructed frame contains something to marvel at, or background details that only gradually reveal themselves. Deakins' style certainly nods to the work of the original's cinematographer, Jordan Cronenweth, but it has a visual language all its own.

Quoting from the original Blade Runner, itself inspired by Philip K. Dick's 1968 novel Do Androids Dream of Electric Sheep?, has become somewhat de rigueur for contemporary sci-fi. So many of its stylistic signifiers have become ingrained in the genre's lexicon: the blithe ambiguity; the grubby, rainy cityscapes, littered with holographic billboards and punctuated by pops of neon; the grim nods to the smoke and shadows of film noir.

All of these things are present in 2049, too, but its most unexpected virtue is its creeping sense of optimism. For a film about the dangers (and, sometimes, the prurient pleasures) of artificiality, it's as hopeful as it is haunting. It is human after all. ♦

Blade Runner 2049 is not showing in any theaters in the area.