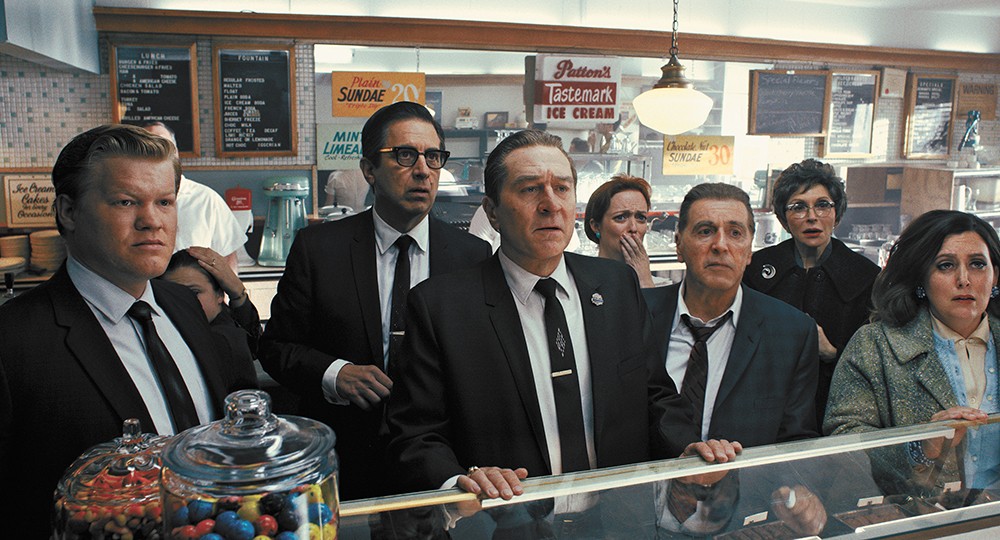 Robert De Niro and Al Pacino do their best work in years in Martin Scorsese's The Irishman.

There's a sense of finality coursing through the veins of Martin Scorsese's The Irishman, which is a slow-motion elegy not only for its characters but for its actors, its director and its very form. Like so much of Scorsese's work, it is preoccupied with death, but rarely has an American gangster film considered the mortality of its subjects with such a grim frankness. Theirs is a lifestyle of expendability: Either you'll be left to bleed out on the sidewalk or you'll survive only to waste away, hopelessly alone. There are no alternatives.

Based on Charles Brandt's nonfiction book I Heard You Paint Houses, the film chronicles the life of career criminal Frank "the Irishman" Sheeran, played with stunning virtuosity by Robert De Niro. The movie is told in flashback, with an elderly Sheeran dictating his dubious accomplishments directly to camera from his nursing home — how he started out running a grift on a meatpacking company, how that operation captured the attention of Pennsylvania crime boss Russell Bufalino (Joe Pesci), how he was eventually enlisted as a go-to errand boy for the mob.

It's this line of disreputable work that leads Sheeran to Teamsters President Jimmy Hoffa (Al Pacino), who, in the late '50s, has as many mortal enemies as ardent worshippers. Sheeran becomes a middleman between Hoffa and the Bufalinos, as well as something of a fixer, because Hoffa has built a brand on deliberately uncouth, unfiltered intensity.

Though we're introduced to a sprawling cast of supporting players — lawyers, politicians, wives, children, other hitmen who are far less exacting than Frank — it's the relationship between Sheeran and Hoffa that eventually pulls our focus, and that gives the movie its strangely emotional center. They're polar opposites — one is resolute, the other reckless — but we sense an almost paternal protectiveness developing between them, especially as Sheeran realizes he can't keep rescuing Hoffa from his own worst instincts.

De Niro has been phoning it in so often that it's almost a revelation to see him putting in effort again. Frank Sheeran is amongst his greatest roles, and it requires him to inhabit a full life, going from a 20-something WWII soldier to a frail octogenarian. (The much publicized de-aging CGI is only creepy and distracting in a couple shots.)

Pacino has similarly been relying on his gaudiest acting quirks, but as the ill-fated Hoffa, he finds just the right note of passion tipping over into pomposity. Pesci, on the other hand, is the opposite of overexposed. He hasn't appeared in a film for nearly a decade, and it's great to see him again, especially in a role that's uncharacteristically subdued: a withering look from Bufalino is as lethal as a gunshot.

Steven Zaillian's screenplay examines the routines and hierarchies of these men with the same journalistic specificity that Nicholas Pileggi brought to his scripts for Scorsese's GoodFellas and Casino. Some of the best scenes in The Irishman involve process — for instance, how Frank decides which gun he'll use for a given hit. It also manages to be sneakily funny all the while, full of morbid punchlines.

You've no doubt heard that The Irishman is three and a half hours long, and yet it breezes by, because every scene has a clear purpose, every line of dialogue carries weight and every shot is packed with detail. It's exhilarating to watch. It debuts on Netflix on Nov. 27, but it really should be seen on the big screen, where you can let it unfold in real time, undistracted, and become immersed in its teeming world.

It's more than likely that this is the last gangster epic that Scorsese, De Niro, Pacino and Pesci — all icons of the genre — will make, and that realization is reflected in the material, which Scorsese was born to film. It's the kind of story he tells better than anyone, that of men who spend their short, brutish lives in deference to the next guy up the ladder, and whose jobs demand a level of cockiness that will most certainly get them killed. And then there are the Frank Sheerans of the world, who live to tell their outlandish stories but have nobody left to listen. ♦