WSU president leaves behind a strong vision for the school's future 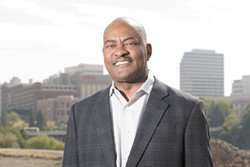 Washington State University President Elson Floyd died from complications related to colon cancer. For even those who worked closely with him, it came as a surprise.

"President Floyd is very private about his health," says Lisa Brown, chancellor of WSU Spokane. Until he took a medical leave at the beginning of June, few knew how serious his cancer had become.

Yet WSU has rarely had a year as important as the final year of Floyd's life. "If you look back to just a year ago, a lot of people would have not given good odds that we would have accomplished so much, with respect to the medical school, in such a short period of time," Brown says. The notion of WSU having its own medical school, introduced as a real possibility last summer, has since been approved by the board of regents, the faculty and both houses of the Washington state legislature.

"You might think when you lose such a strong, powerful leader, there's a lot of floundering," Brown says. But she says that Floyd's vision and direction were so clear that this hasn't been the case. WSU is still marching along the path he set out for the university.

"Even though he was out front," Brown says, "everybody else isn't far behind, because he brings them along." Already, a campaign has begun to name Spokane's future medical school after Floyd.

The delta variant plagued Watershed and got Pig Out canceled — is Hoopfest next?