Both Michael Baumgartner and Maria Cantwell, occasionally, break from their parties 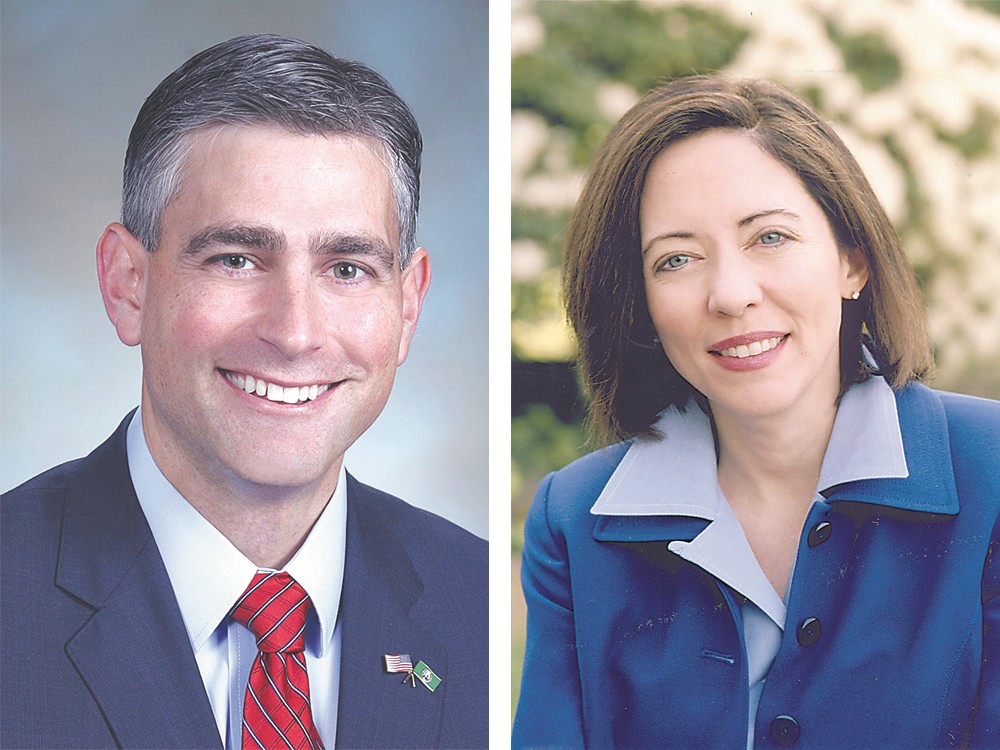 T he Republican on the left, the Democrat on the right.

So if Baumgartner has a chance — and his struggle to capture even Eastern Washington in the primary raises doubt — he needs voters who pick Obama to also pick him. That’s why Baumgartner has lately tried to show himself as different from a generic Republican.

Last Friday, as Baumgartner met Cantwell for their first and only debate, he talked rapidly, crammed statistics and anecdotes and mentioned, repeatedly, how excited he is about his marriage into his answers. But another trait stuck out: Asked about funding for public television, he connected his answer to PBS’s in-depth news show Frontline, shifted to mention Frontline’s coverage of Afghanistan and used that as a another chance to focus on his opposition to the wars in the Middle East.

Cantwell, meanwhile, picked up a Republican argument from 2004: that not funding the wars in Afghanistan would mean not supporting the troops.

Cantwell is far from a clear war proponent — she’s pushed repeatedly for withdrawal timelines from both wars — but Baumgartner’s criticism highlights his own foreign policy values. Iraq and Afghanistan, he says, are bipartisan failures. He doesn’t think the United States should have gone to Libya in the first place and wants diplomats to spend more time mingling with local populations.

Baumgartner has also violated another key tenet of the Republican Party: taxes.

While anti-tax activist Grover Norquist has persuaded Republican legislators nationwide to pledge never to raise taxes, Baumgartner has proposed taxes of his own. While a state senator, he suggested bumping up the sales tax by a penny for more higher education funding. And, recently, he suggested raising the federal gas tax by a penny a gallon during wartime to pay for medical care for veterans.

“When you propose a one-penny tax on gasoline, that makes me about as popular with some Republicans as the [replacement refs] at Green Bay,” Baumgartner says.

In a recent SurveyUSA poll, nearly three-quarters of Washington Democrats said they supported an initiative decriminalizing marijuana, while only a third of Republicans did. But Baumgartner supports the initiative, and Cantwell doesn’t.

“I’m not a fan of marijuana. I’ve never used marijuana,” Baumgartner says, before calling the legislation thoughtful. “But I’ve lived in other countries … that have a better drug policy.”

While Baumgartner throws words like “hyperpartisan” at Cantwell, she stresses her bipartisanship. In the debate, she mentioned that she joined with moderate Sen. Lisa Murkowski, R-Alaska, to strengthen sanctions against Iran, and with Sen. Susan Collins, R-Maine, to regulate carbon emissions.

Analysis of voting patterns by the National Journal shows Cantwell as the 35th most liberal member of the Senate. While more Democrats voted for the bank bailouts than Republicans, Cantwell opposed them.

Cantwell campaign spokesman Kelly Steele says Cantwell’s record shows that she’s able to get legislation like Wall Street reform passed, whether by compromising with Republicans or by steadfastly refusing to compromise.

Cantwell’s campaign wants to paint Baumgartner as extreme. While Baumgartner has long insisted he is not a Tea Party member, Cantwell accuses him of signing Tea Party pledges, and ties him to vice presidential candidate Paul Ryan’s budget. And while running for state Senate in 2010, Baumgartner, a Catholic, said he would support allowing abortion when the mother’s life is in danger, but not in cases of rape.

“You have somebody who is a Tea Party extremist, trying to do everything to not talk about the fact that he’s the most radical anti-choice candidate to run [for U.S. Senate] in Washington state,” Steele says.