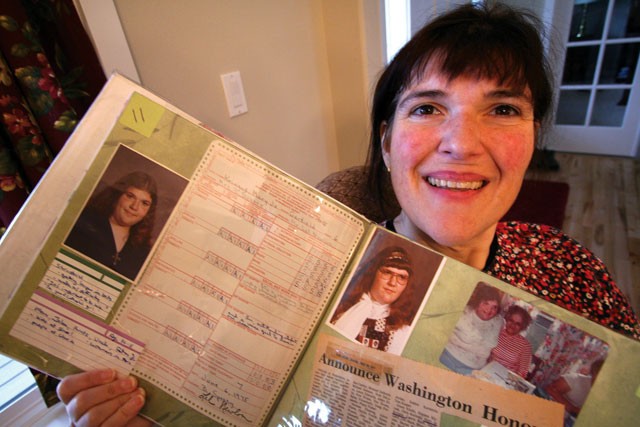 To understand why she was fat, Mary Jo Kringas went back to the beginning and documented her life year by year. Her scrapbook begins with pictures from 1963 — when she was a cherub with pinchable cheeks. Unlike many babies, though, she didn’t outgrow her baby fat. She just kept getting bigger.

It happened easily enough, growing up at her grandfather’s candy store in Chicago, working behind the counter from age 6 and stealing candy all the while.

She was the largest kid in her kindergarten class. By the third grade, she weighed 180 pounds. When the school nurse visited her sixth-grade class and weighed every child in front of their classmates, it was one of Kringas’ worst experiences ever.

She was 264 pounds. The nurse read the numbers aloud. Pandemonium erupted. “That’s bigger than my dad!” one of her classmates yelled.

Today Kringas looks nothing like the awkward teen taped into her scrapbook next to a straight-A report card. She’s about 300 pounds lighter than she was at her heaviest of 465 pounds, though she has no idea how much she weighs now — 160 maybe. It’s only a guess.

How’d she do it? Not the way you might expect.

She’s thrown out her scale — something she recommends that all fat people do.

She doesn’t count calories. She doesn’t go out of her way to exercise.

She uses heavy whipping cream in her coffee and eats fried eggs and bacon for breakfast.

Though she’s not eating 16 candy bars a day like she once did, Kringas remains a chocolate addict. She still eats a few of her own ChocoPerfection bars a day.

And she doesn’t feel guilty.

“Our emotions create our body size,” the Coeur d’Alene woman says. “It’s not about how much we eat. It’s about the emotions and noting what emotions create the food choices we’re making.”

Kringas, a devout Catholic, says, “The big emotional shift occurred about five years ago in church.”

A skinny woman sat down in front of her, and Kringas says she got mad. She was angry with God — something out of character for her.

Why couldn’t she be skinny? It wasn’t as if she hadn’t tried.

Afraid she’d never be hired for a job as a fat person, Kringas says she started following the Weight Watchers plan after graduating from high school. She lost even more weight during grad school by subsisting for eight months on diet Jell-O and salads.

At 22 she was 157 pounds, the least she’s ever weighed. But she didn’t keep the weight off for long.

She met her first husband at age 25 and married at 28. The relationship resurrected Kringas’ feelings of guilt and not measuring up and not being good enough.

Though the surgery was supposed to limit the amount Kringas could eat, she said she was able to fool her body by making the food into liquid in her mouth so it would go down.

Just before her 40th birthday, Kringas saw a therapist to help deal with problems in her marriage and to deal with baggage leftover from childhood.

“For me, the emotional work was the most critical thing in my weight loss,” she says.

She left her husband and began eating a diet low in carbohydrates. She still craved sugar, though, and the artificially sweetened chocolate bars she relied on to satisfy her sweet tooth weren’t helping her lose any weight.

That’s when the chocolate addict got the idea to create her own chocolate bars sweetened with natural chicory root.

Finding a way to get her chocolate fix was just another step toward a new Mary Jo Kringas — as was that moment in the church pew when she became angry with God and then decided to embrace the body He gave her.

Kringas acknowledges that some people have been skeptical of her approach to weight loss — eating fatty foods and enjoying chocolate. But for her, the food is secondary.

And in many cases, Kringas says, skinny people are the ones doling out the advice: how to lose weight, how to eat, what not to eat. For Kringas, all that advice just adds up to more emotional turmoil for overweight people.

With the help of her counselor, Kringas discovered she was using sugar to help mask lifelong guilt she felt about stealing candy as a child and even about simply being overweight.

Interrupting the feelings of guilt and coming up with a way to get her chocolate fix and satisfy her cravings made all the difference for Kringas.

“A lot of times people define who they are by what they were yesterday,” she says.

Not Kringas. She has a lot of blank pages left in her scrapbook.

Though she was losing weight with a low-carb diet, Kringas continued craving chocolate. The only chocolate she could find was either made with sugar or artificial sweeteners — both of which Kringas says cause undesirable insulin surges.

Then she discovered oligofructose, a natural sweetener made from ground-up chicory root, and she began searching for a chocolatier who could turn her vision for a healthy chocolate into a bar.

Her sweet tooth was satisfied, and Kringas was able to continue losing weight even while enjoying three or more bars a day.

Kringas says she doesn’t want to use that as a platform for selling chocolate bars. “I’m the only person I know who has lost a lot of weight,” she says.

More than anything, she believes people must address their own emotional issues that translate into extra pounds.