What to do when tween girls turn on each other 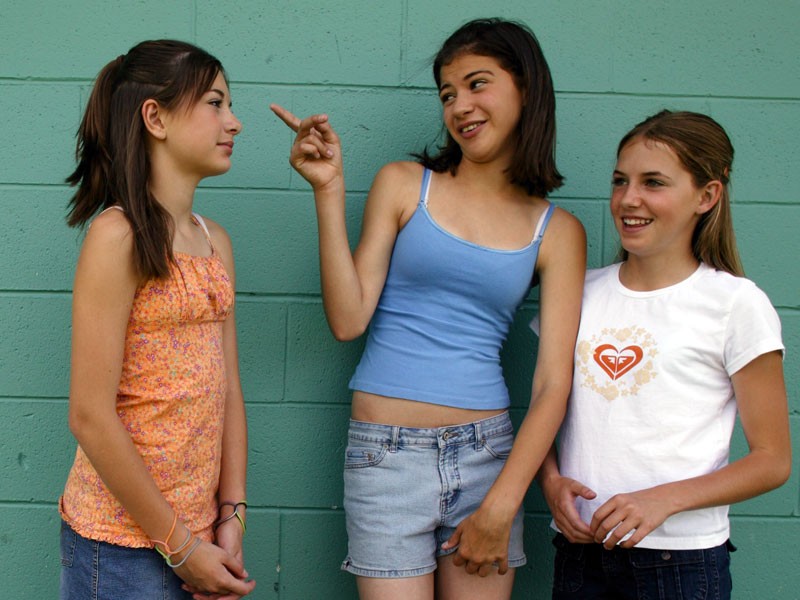 It starts at recess: arguing, shoving, name-calling and a trip to the school counselor’s office. Inside that crowded office, the four boys continue arguing and then begin messing around as the counselor wraps up a phone call.

“OK, guys, tell me about what happened,” Jacquie Johansson asks after hanging up the phone.

“Mrs. Johansson?” one of boys speaks up, now smiling wryly. “You know how you always tell us boys are good at getting over things quickly? Well, we got over it.”

The boys file out of the office and go back to class.

“If that had been a group of girls,” Johansson reflects, “they would have been silent, their arms would have been crossed, eyes fighting back tears. It may have taken hours to work out.”

Experts know how to stop a fistfight. Lawmakers can create zero-tolerance policies for harassment in schools. But stopping kids from excluding other from four-square games and sleepovers? Halting the loud criticism of one girl’s off-brand pair of shoes?

“It’s much more difficult to detect and deal with girl bullying,” explains Johansson, who works with students at both Moran Prairie and Wilson Elementary in south Spokane. In fact, “girl bullying” is a misnomer. Its many sub-categories fall under the term “relational aggression,” or “social cruelty.”

“It’s so layered,” says Johansson. “[Girl aggression] can be things like you’re best friends with somebody, you tell them your deepest, darkest secret, then they share it with someone else.”

“YOUR SHIRT IS STUPID”

In addition to telling secrets, targets of relational aggression hear whispering and false rumors, and see glaring and eye-rolling. The atmosphere is so charged, in fact, that parents will only agree to discuss it if we don’t use their names. Kelly, a north Spokane mom, relates how a girl in her third-grade daughter Emily’s classroom writes “I hate Emily “ on math whiteboards and flashes them across the room.

“Sometimes she tells her, ‘Your shirt is stupid and I wouldn’t wear it,’” continues Kelly. Emily will come home and express anguish to her parents, then become friends with the perpetrator the next day.

In her mixed-age classroom in south Spokane, Sarah was one of just four second-grade girls. “The other three girls had known each other since before grade school, so Sarah was the odd one out,” explains her mother, Pamela. She suspects that since Sarah was quiet and eager to please, she made a tempting target.

“She really wanted to fit in with these three girls, and while they were all friends, there was one clear ringleader,” Pamela says. “If Sarah was working on a project, Kayla would say, ‘Don’t work on that, you can’t do that,’ and she would tell Sarah to put her things away for her.”

Pamela would try to create activities at home to keep Sarah’s focus off what was happening at school. “But she was just obsessed. It was frustrating that she wouldn’t take my advice, and counseling didn’t really help. There was nothing I could do. I just felt helpless,” Pamela says.

Keith Vitali’s Bullyproof Your Child has bullying scenario scripts and color photographs of physical self-defense strategies. If only parents and counselors could teach the emotional equivalent to the “Palm Heel” or “High X” blocks.

“When girls are betrayed by a friend, the reason it’s hard to get over is it feels so personal,” says Johansson.

Author Rachel Simmons interviews hundreds of bullies and targets in her book, Odd Girl Out: The Hidden Culture of Aggression in Girls. Some are in the middle of an incident, and some reflect on things that happened 15 years ago. “Despite the cruel things that happened, the torrents of vulgar email and unsigned notes, the whispered rumors, the slanderous scribblings on desks and walls, the sneering and name-calling,” Simmons writes. “What crushed girls was being alone.”

“Wanting to be included is a human condition,” explains Lori Gibson, a guidance counselor at Spokane’s Arlington Elementary, who teaches problem-solving and “girl culture” workshops with Johansson.

“For girls especially, a break in relationship is a psychological trauma,” says Gibson.

With her daughter Sarah now in fourth grade, and separated from her former classmate Kayla, Pamela says she believes a need for security drives both sides of a “girl bully” dynamic.

“I think the aggressor and the target are just two insecurities reacting to each other. The target is insecure and seeks the more dominant personality, maybe to help bring that out in themselves … and the ‘bully’ makes herself bigger than she is because she actually feels small, or threatened by the other girl. In both cases,” Pamela concludes, “they’re looking for approval.”

Incidences of teasing and nastiness may have remained consistent for decades, but the way girls respond has changed.

“In the last 15-20 years, girls have become empowered. They’re sticking up for themselves,” says Johansson. That’s the good news. But she also says a mixed cultural message is the cause of social upheaval.

“Girls and women have advanced in math, science, engineering, but we are still expected to be pretty, appropriate and demure while accomplishing these things,” she says. “When I can get girls to see that [relational aggression] is a universal problem, when they can see it as a cultural dilemma, it’s not as personal.”

WHAT SCHOOLS ARE DOING

After Washington added a cyberbullying section to its 2008 school bullying protection law, a national bullying watchdog group gave the state an A+ for its effort to protect grade-schoolers.

“While we may not have a consistent district-wide approach,” Gibson says, “educators are better at identifying girl bullying than we used to be, and we deal with it sooner. I teach students and parents that the best way to avoid being bullied is to not be alone. Having a healthy, safe friendship is the best antidote.”

“If I think someone’s being targeted, I let the parents know right away,” adds Johansson. Her two schools and several other grade schools use the “Kelso’s Nine Strategies,” which give students a consistent framework and language to solve their problems together before involving adults.

Brook, a sixth-grader at Moran Prairie, is a peer mediator for Johansson: “I don’t like to see girls being teased. It just annoys me. I’d like to keep it from happening, and I like helping people solve their problems. I feel like I’m a leader and a role model.”

Through peer mediation and repeated conversations, “We can help them see the bigger picture,” says Johansson. “I talk to them about finding themselves, to be able to answer to themselves.” Although it can seem excruciating for girls at the time, it offers a chance to build important skills.

“This really is such a fabulous learning experience,” she says. “They have you with them to talk through it.”