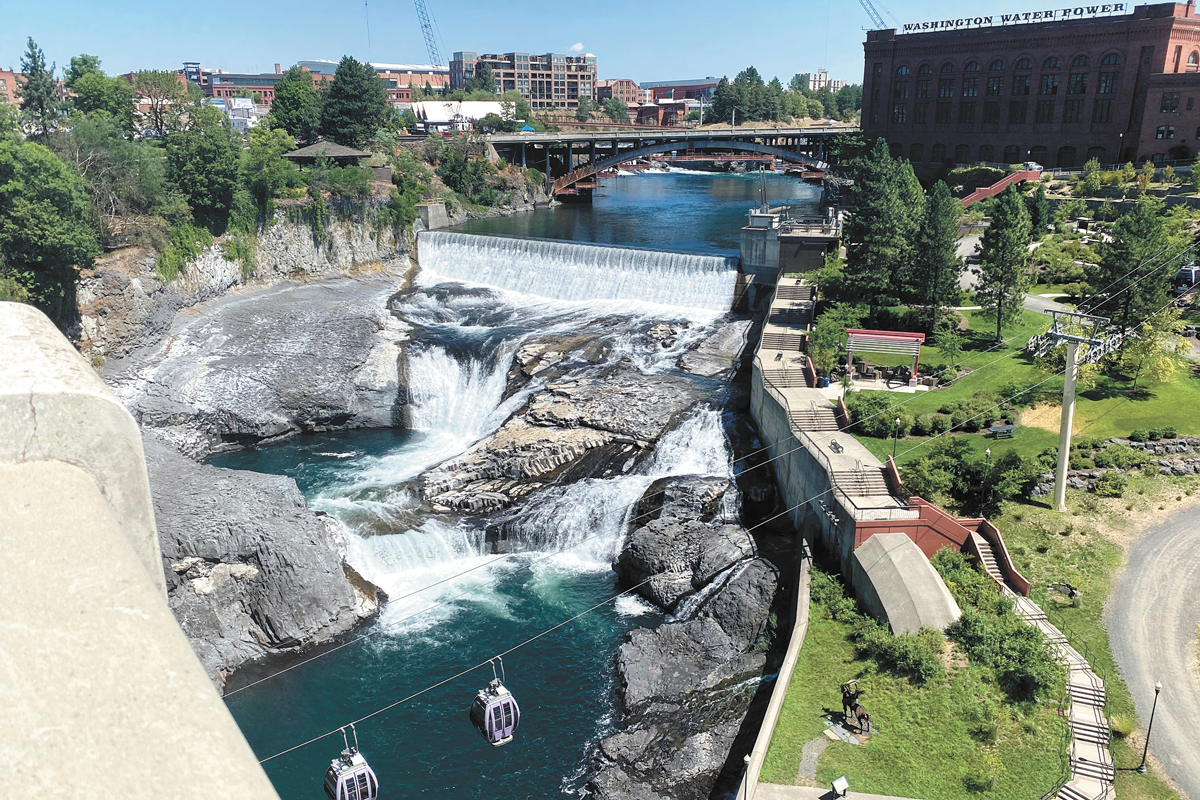 Samantha Wohlfeil photo
The Spokane River continues to be plagued with PCB pollution.

It was recognized about 30 years ago that the Spokane River was contaminated with carcinogenic chemicals. Now, more than a decade after filing a federal lawsuit over that contamination, environmental groups are done waiting: They want a federal cleanup plan, ASAP.

Early this month, the Sierra Club's Upper Columbia River chapter and the Seattle-based Center for Environmental Law and Policy — with the support of the Spokane Tribe of Indians — requested a federal judge rule in their favor in a case that stretches back to 2011.

Specifically, they've asked the court to find that since Washington state's Department of Ecology has so far failed to produce a legally required cleanup plan for the river called a total maximum daily load, the Environmental Protection Agency should be required to create one instead.

Since 1996, the river's been listed as "impaired" for polychlorinated biphenyls, more commonly known as PCBs, chemicals that accumulate in fish and animals and continue to plague the area despite no longer being intentionally manufactured. The Clean Water Act dictates that impaired waters be cleaned up, and one key tool is to determine the maximum amount of a pollutant that can enter that waterbody and still meet health standards.

"We have to get to a point in this community where we no longer have to say, 'Yes, the river's beautiful, but don't eat the fish,'" says John Allison, a volunteer with Sierra Club's Spokane River Team, during a news conference on July 6. "We need the river cleaned up. We need a plan: Twenty-five years since it became known the river was contaminated by PCBs is long enough."

Way back in 2006, it looked like Ecology was ready to put specific limits on five large PCB polluters. But that plan was halted, and no efforts to draft a new one have started in the 15 years since.

Instead, Ecology helped create a regional task force to foster collaboration between polluters and regulatory agencies as they work to clean up the river. Reductions in PCBs have been made since that task force started, but environmental groups say that progress is moving too slowly.

They argue that not only will a maximum load for the chemicals require more work from polluters, but more significantly, a task force isn't a substitute for the cleanup plan Ecology is required to create.

"They've not done one for PCBs on the Spokane River because, admittedly, it's tough to do," says Marc Zemel, the attorney representing the environmental groups. "But the Clean Water Act does not make an exception when it's hard."

In 2011, the same year the lawsuit in question was filed, Ecology formed a task force made up of environmental groups, tribes, the EPA, public interest groups and five large Spokane-area polluters (Kaiser Aluminum, Inland Empire Paper Company, and the wastewater treatment plants for the City of Spokane, Liberty Lake and Spokane County). Dubbed the Spokane River Regional Toxics Task Force, it was charged with identifying sources of PCBs in the area and reducing them.


In requiring the five dischargers to be in the group, Ecology argued that creating a maximum load for PCBs could be costly and time-consuming, while a collaborative approach like the task force might work to reduce pollution faster.

Since its inception, the task force has contracted for environmental testing to better understand PCB levels in fish, water and soil along the river from the Idaho border to Upriver Dam. In 2016 the group also finished a comprehensive plan for the river.

Adriane Borgias, a former task force member and Ecology's Eastern Regional Water Quality Manager, says the group has done community education and outreach and has helped look for innovative cleanup technologies. The group has helped identify some large sources of PCB pollution that aren't from a specific polluter, such as the former Kaiser smelter site in Mead, where EPA removed thousands of pounds of PCB-laden building materials in a $6 million cleanup in 2020.

Borgias also notes that the involved polluters continue to reduce their own loads on the river.

But while PCBs have declined over the past decade, the levels of those chemicals coming out of polluters' pipes still exceed water quality standards in many cases.


But state and environmental groups have asked the EPA to lower that threshold of 170 back down to 7 parts per quadrillion, a standard the EPA had previously set in 2016 (before reverting to the higher number under the Trump administration).

At the end of June, the EPA announced it would again go through the 18-month process of setting water quality standards for the state. Regulators expect to see the lower standard of 7 parts per quadrillion come forward again, but it's too early to know yet.

In requests to Ecology (which are on hold while EPA works on the new standards), the five large dischargers had previously asked for permission to exceed the more stringent health standard while they install and/or design new technology to filter or destroy PCBs over the coming five to 20 years. Some of those dischargers regularly see levels from 50 to 12,000 parts per quadrillion.

Meanwhile downstream, the Spokane Tribe has an even stricter water quality standard for PCBs — set at just 1.3 vs. 7 parts per quadrillion — due in part to an emphasis on restoring healthy fish runs.

"One of the purposes when the tribe's reservation was set aside was so that the tribe could access fish for food. Period," says Ted Knight, special legal counsel for the Spokane Tribe. "With PCB levels where they are currently, I think any tribal member who were to eat fish out of that river at subsistence levels would be risking their health."

A draft report from June found that PCB levels in rainbow trout tested in 2020 are about the same magnitude as they were when tests were done in 2005 and 2012. Importantly, those previous tests were on older fish and only sampled fillets, while the newer tests sampled the entire fish. (PCBs appear to be more prevalent in skin, fat and organ meats.)

The 2020 juvenile fish contained between three and 30 times the amount of PCBs considered safe for human consumption, according to the draft.

Polluters haven't had to meet specific limits in water under their current or previous permits. The test that's approved to enforce those permits can only reliably measure down to 50,000 parts per quadrillion. However, another test that can examine levels 1,000 times smaller than that could be used to inform the stricter cleanup plan that's been requested.

Environmental groups believe giving each polluter a set PCB limit based on the overall river's load would better enable enforcement and require polluters to speed up the process.

In fact, it was a total maximum daily load that Ecology made for dissolved oxygen on the river that forced many of the same polluters to install "next level" treatment systems to prevent phosphorus pollution. That membrane treatment also happens to be good at catching about 90 percent of PCBs.

But Spokane Riverkeeper Jerry White says that's still not enough. The Riverkeeper supports the Sierra Club lawsuit even though they aren't party to the case.

The Riverkeeper quit the task force in 2019, and Kootenai Environmental Alliance quit last month, both noting that the only clear path to cleanup at this point appears to be assigning the load limits.

Next year is the 50th anniversary of the Clean Water Act, which White notes was meant to end pollution into U.S. waterways by the late 1980s.

"That was the vision," White says. "All of this work on PCBs and this tusseling and struggle is in the spirit of the original Clean Water Act, which said we would ultimately end pollution, and that's absolutely what we have to do here." ♦