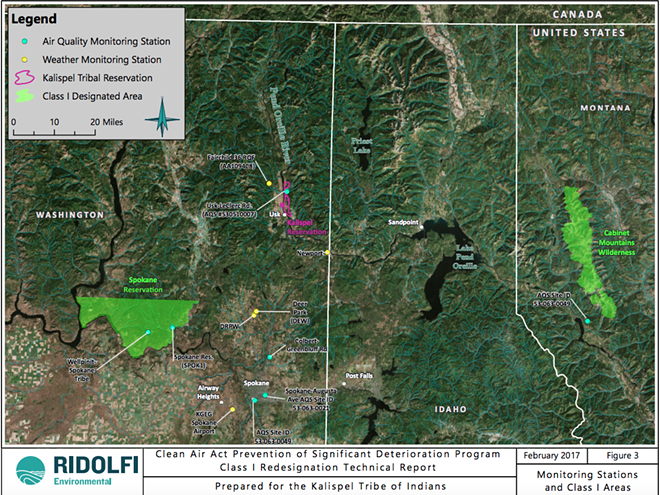 The Environmental Protection Agency last week published its final rule designating the reservation air space as Class I (up from Class II), a stricter designation that the tribe asked for back in 2017.

The move to protect air quality over part of the reservation was sparked when the tribe learned of plans to build a new silicon smelter near Newport, which has the potential to generate large amounts of pollutants, explains Deane Osterman, executive director of the Kalispel Natural Resources Department.

"It wasn’t until the PacWest facility was sprung on us in August of 2016 that we had ever once worried about our air quality from a pollution perspective," Osterman says. "We want reasonable assurances that protection of our fundamental 'qualities' — air quality, water quality, and environmental quality — is sufficient enough to not be threatening to our community’s health. I don’t think that’s too much to ask."

So the tribe followed the process laid out under the Clean Air Act to change a state or Native American government's air shed to a stricter standard.

The new designation won’t prevent development, but will dictate changes that large polluters have to make if pollutants in the air shed hit certain levels.

During the process, EPA received comments from 164 parties, 137 of which were supportive of the tribe's request.

Those who weren't supportive, including Pend Oreille, Boundary and Stevens counties, as well as Ponderay Newsprint Company, questioned the potential economic impacts to the rural area, citing concerns that additional air permitting requirements could deter growth in an already financially burdened part of the country. They also claimed that the tribe didn't properly consult with Pend Oreille and surrounding counties before submitting its proposal.

But the EPA notes that the Clean Air Act and case law give the agency little wiggle room when a tribe's government requests to change its air space to a different class, so long as they follow the proper procedure to request the change, which Kalispel did.

Further, EPA notes that the rules only require consultation with the government(s) "in the area covered by the proposed redesignation."

"The Kalispel Tribe's proposal makes clear that the area covered by the proposed redesignation is the original reservation established by Executive Order No. 1904, signed by President Woodrow Wilson on March 23, 1914," EPA states in its final rule published in the federal register. "The Kalispel Business Council is the exclusive governing authority in the Kalispel Reservation. Therefore, the Kalispel Tribe satisfied this requirement. The area 'covered' by the redesignation is separate and distinct from the areas that may be 'affected' by the redesignation."

So while large polluting projects off the reservation could be affected, governments where those projects are located don't have to be consulted ahead of a change, EPA notes. Plus, it's noted, the tribe did send courtesy notices to nearby governments and officials about their plans.

"EPA has suggested that the tribe bears no obligation to consult with Pend Oreille County because the consultation obligation applies only to local governments inside the reservation boundary," a Feb. 19 letter from the Pend Oreille commissioners states. "The entire Kalispel Reservation, however, lies within Pend Oreille County. Thus, even by EPA's own rationale, portions of the county lie within the reservation. The tribe should have consulted with the county's elected representatives prior to submittal of its redesignation proposal."

But EPA soundly rejected that logic. As a sovereign government, Kalispel is the only government with authority on the reservation.


The county commissioners' fight is centered on protecting development opportunities.

"Kalispel tribal leaders have stated repeatedly that their purpose in proposing a Class I redesignation was to defeat a proposal to build a silicon smelter in close proximity to the reservation," the February letter also states. "The county believes that there may be vehicles other than a Class I redesignation to protect the tribe's interest in maintaining high air quality on the reservation."

While the smelter proposal certainly sparked the work, for the tribe, getting the Class I air designation really comes down to ensuring protection for future generations, Osterman says.

"For the designation, we were focusing on the part of the reservation on the Pend Oreille River, where the vast portion of our community lives. It’s the place where we’ve suffered the greatest environmental harm over decades," he says. "We have people who don't interact with the river the way they once did. We don't want to see our air resources impacted the same way."

Getting the stronger air protection is a relief in that sense. But importantly, it doesn't completely eliminate the possibility of polluting development, Osterman says.

Because the air in that area is already very clean most of the year, there's still room for more pollution before the stricter regulations would take effect.

"It offers an increased level of protection, but remember, there’s a limit to be used up before this changes things," Osterman says. "That’s the limit to our environmental laws. There's a balance between promoting economic development and protecting the environment. There's a tension in there. ... We’re kind of caught in the middle of all that."