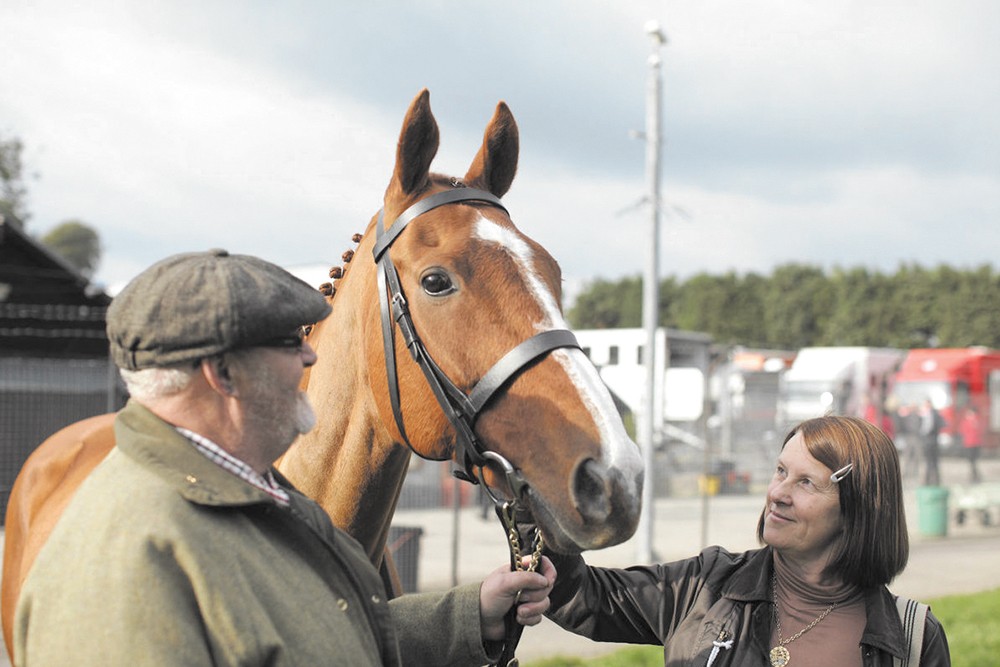 There is nothing so magnificent,

so utterly inspirational, as a horse at full gallop, its muscular torso flexing with each lengthening stride, suspending the creature in an airborne state of physical grace for a brief second or two before the hooves hit the ground again, only to lift the animal aloft once more. It's a spectacular thing to behold, hypnotic in its poise and beauty.

The enormously heartfelt documentary Dark Horse translates this equine grandeur into something even more breathtaking, recounting how the residents of an economically depressed Welsh mining village, people with no prior equestrian experience, pool their financial resources to breed a racehorse fittingly named Dream Alliance. In this Cinderella story, the glass slipper is not the brief fame and fortune that this scrappy but determined animal brings to its unlikely owners, but the unconditional love he shares with those human beings, and the sense of pride they feel in his accomplishments, which include winning the 2009 Welsh Grand National.

It's a you-can't-write-this-kind-of-stuff true story that will bring tears (the good kind) to your eyes, beguiling in its simplicity and purity of heart. Take your handkerchief and prepare to well up, just as Dream Alliance's working-class owners occasionally do as they recall their life-enriching experience in the film. Watching their misty-eyed reminiscing is nothing less than humbling. This is the real thing.

First and foremost, there's the middle-aged barmaid Janet Vokes, who overhears a pub patron discussing a racehorse he once owned (a less-than-positive experience, no less) and decides she'd like to do the same, with a little help from her friends. For this nurturing woman and her fellow syndicate members, breeding and racing Dream Alliance is not just some get-rich scheme motivated by profit. (At the end of the horse's career, they each only cleared £1,430.) As his carefully chosen name indicates, he means much, much more to them.

Class plays a subtle but important role in the narrative of Dark Horse, as the villagers rub elbows with society's elite and dare to intrude upon a traditional pastime of Britain's landed gentry. (One can't help but gleefully imagine the reactions to the warm, toothless grin of Vokes' husband as he mingles amongst the racetrack crowd.) While the underdog element of this tale is emotionally gratifying, it's the humanity on unadorned display here that will move you beyond words. Regardless of whether Dream Alliance wins, places or shows, he and this lovely film are, without question, a sure bet. ♦

Spokane Symphony: Back to the Future in Concert @ Martin Woldson Theater at The Fox