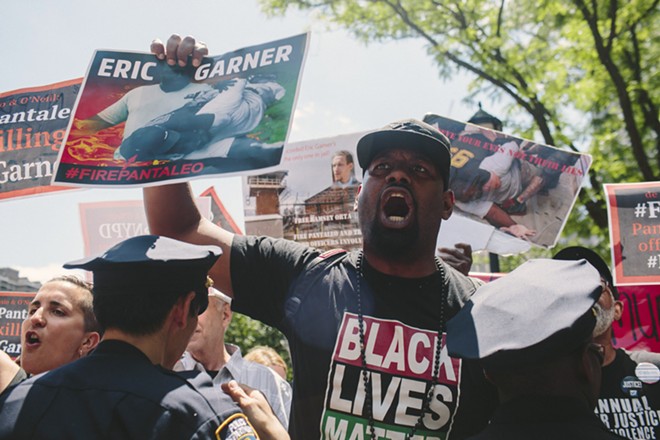 Gabriela Bhaskar/The New York Times
Protesters outside police headquarters in New York during the departmental disciplinary trial of Officer Daniel Pantaleo on June 6, 2019. The Justice Department will not bring federal charges against Pantaleo in the death of Eric Garner, ending a yearslong inquiry into a case that sharply divided officials and prompted national protests over excessive force by the police, according to two people briefed on the decision on Tuesday, July 16, 2019.
By Katie Benner and William K. Rashbaum
New York Times News Service

NEW YORK — The Justice Department will not bring federal charges against a New York City police officer in the death of Eric Garner, ending a yearslong inquiry into a case that sharply divided officials and prompted national protests over excessive force by police.

The U.S. attorney in Brooklyn, Richard P. Donoghue, announced the decision not to bring criminal civil rights charges Tuesday morning, one day before the fifth anniversary of Garner’s death.

Bystanders filmed the arrest that led to his death on their cellphones, recording Garner as he gasped “I can’t breathe,” and his dying words became a rallying cry for protesters across the nation. His death was one of several fatal encounters between black people and police that catalyzed the national Black Lives Matter movement.

A Staten Island grand jury declined to indict Officer Daniel Pantaleo, who was seen on the video wrapping his arm around Garner’s neck, and the federal investigation dragged on for years amid internal disputes in the Justice Department, both under former President Barack Obama and President Donald Trump.

In the end, Attorney General William Barr made the call not to seek a civil rights indictment against Pantaleo on civil rights charges, just before the five-year deadline for filing charges expired.

On Tuesday morning, Donoghue called Garner’s death a tragedy but said “the evidence does not support charging Police Officer Pantaleo with a federal civil rights violation.” He went over the entire arrest step by step and said the government could not prove Pantaleo willfully used excessive force to violate Garner’s rights as required under the law.

The decision extinguishes the hopes of the Garner family and their supporters that Pantaleo might face federal prosecution in a case that ignited demonstrations and debates over the use of force by police officers and led to changes in policing practices across the United States.

After meeting with prosecutors, Garner’s mother, Gwen Carr, denounced the decision, saying she would keep pushing to hold the officers involved in the arrest accountable.

“We might not never know justice in the DOJ, but I think there will be justice, and we’re going to keep fighting,” Carr said. “We’re not going away, so you can forget that.”

It is ultimately up to Police Commissioner James P. O’Neill to decide whether to fire Pantaleo.