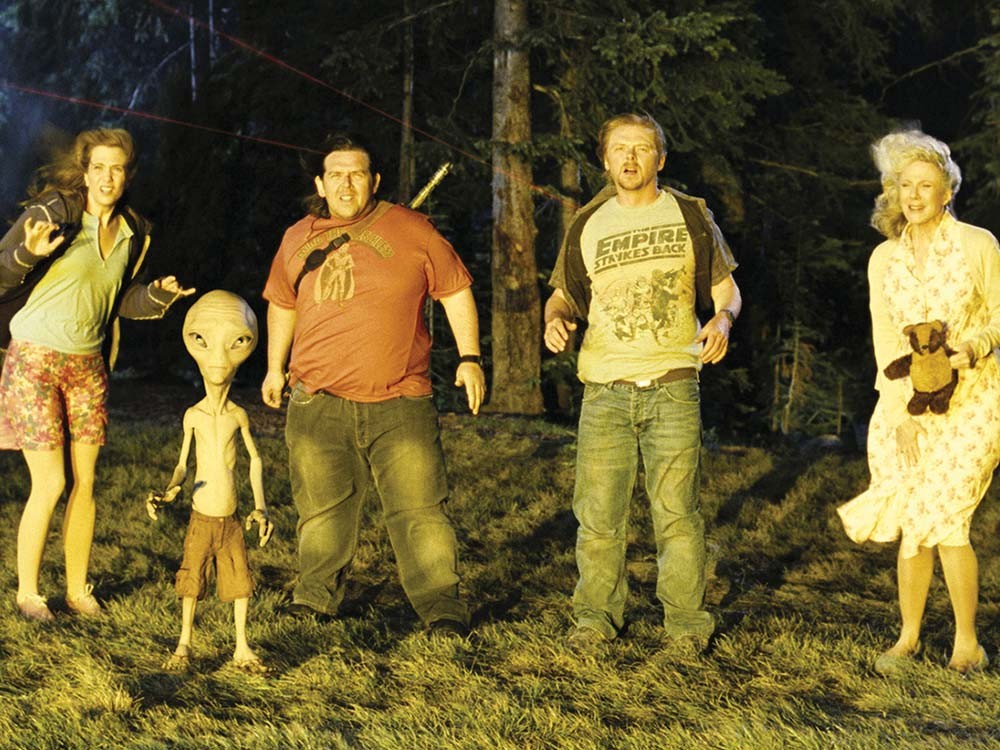 Take us to your dealer.

Paul mashes up genres — it’s a science-fiction road-trip buddy comedy — to create a funny, breezy, goofy, slightly naughty movie that can be enjoyed by everyone. But you’ll like it even more if you’re a fan of the British duo of Simon Pegg and Nick Frost, who co-starred in Shaun of the Dead and Hot Fuzz. Most important, you’ve got to go with no preconceived notions about the sometimes insufferable Seth Rogen; this time out, he gets it just right.

We open in 1947 Wyoming, at a house in the middle of nowhere. The opening scene recalls Close Encounters of the Third Kind — but instead of a mom and her son checking out some strange lights beyond a door, it’s a little girl named Tara (Mia Stallard) and her dog named Paul.

Boom! Crash! (off-camera) Squashed dog! The setting jumps to today, at the annual ComicCon convention in San Diego, where we meet two British comics nerds, Graeme and Clive (Pegg and Frost), who are beginning an RV tour of UFO hot spots across the American West.

But there’s a mishap out on the road, and in short order, these two guys — who would give anything to, you know, make contact — meet up with a short alien fellow named Paul.

Yup, he was in that long-ago spaceship crash.

Uh huh, he took on the dog’s name. Yes, the government took him captive. And now, he’s trying to get back home.

As a borderline science fiction nerd myself, I’ve gotta admit that the special-effects folks have come up with a very cool creation in the little guy. He looks real, and the back-and-forth presentation between him and the humans is flawless. He’s got special powers and weird habits and seems to get a kick from freaking out his new pals, whom he trusts to get him where he needs to go.

Voiced by Rogen, he’s also a wise guy, with a bit of a potty mouth and a yen for smoking pot.

Paul plays out as a strong science fiction entry, not a spoof of sci-fi films. There are plenty of ridiculous characters, some of them bordering on cliché — a serious, by-the-book Secret Service agent (Jason Bateman), a couple of ineffectual FBI guys (Bill Hader, Joe Lo Truglio), an unenlightened trailer park gal (Kristen Wiig) and her Bible- and gun-totin’ pappy (John Carroll Lynch).

But it’s real science fiction — a film filled with a sense of wonder, some spare but good-looking visual effects, and references to, for instance, tactile psycho connect bridges ... or something like that.

As it’s made clear that the little alien is a free spirit — he will say or do anything for a gag — so, too, do the filmmakers reveal that they’re unafraid of taking offbeat risks.

Amid the bits of toilet humor and plentiful salty language are casual mentions of how Paul, over the years, has influenced pop culture. Taking off on that idea, there’s a wonderfully self-deprecating phone call cameo by Spielberg (whom co-writers Pegg and Frost met while acting in his upcoming The Adventures of Tintin).

The film also has just the right amount of heart. But its best moments come from the dialogue and its delivery.

My favorite lines? The throwaway “There’s an alien in the kitchenette making bagels and coffee.” And the drug joke of the year, recited while a joint is being passed: “This is the stuff that killed Dylan.”