It's not as giant as they had originally thought, but at least scientists can say that Giant Palouse Earthworms really exist 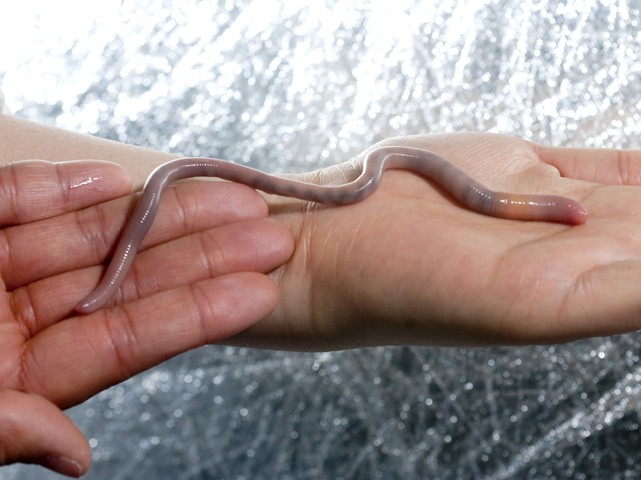 After 10 minutes of shocking the dirt, Karl Umiker started to work the ground with a trowel — hoping some earthworms would come up.

As a research support scientist at the University of Idaho, he and Shan Xu (a Master's student) had returned to this slice of prairie — a narrow eyebrow south of Moscow called Paradise Ridge — to sample for earthworms. The winter had been mild, making the area easier to access far earlier than in past years.

As soil scientists, they were searching for any earthworms — but always hoping to spot a rare Giant Palouse Earthworm: the fabled three-foot, lily-scented, pale white worm that The Inlander reported on in November. It's a worm that's so rarely found many questioned whether it even existed.

During this visit, in late March, Umiker stuck his trowel in the ground and saw a worm. A pale worm. A big, not giant, worm.

"I moved a little bit of vegetation out of the way and right away I saw the juvenile worm," he says. "And then I started digging around a little bit and managed to not slice the adult earthworm in half. I managed to get both worms unharmed."

"I knew right away when I saw them — the juvenile looked strange to me," he says. "I told [Shan], this is something special. We need to be careful here."

After collecting both worms — one juvenile, one adult — and three earthworm cocoons, he and Xu brought them back to the university lab. The adult was sent off to be killed, dissected and identified; the juvenile was tucked in a cooler of dirt in the lab. Working with Kansas taxonomist Samuel James, they ID'd it: this was a Giant Palouse Earthworm — the first to be found and successfully collected in decades.

News of their extraordinary find made national headlines today, appearing in articles in the New York Times and Washington Post, among dozens of other news outlets.

Finding one of these worms alive is just one hurdle for the scientists, Jodi Johnson-Maynard, an associate professor of soil and water management at the U of I, says.

"We feel like we're learning a lot about the species, but we still know relatively little," she says. "Some of those same questions are still going to be there. How large is the population? Can we prove without a doubt that it's numbers have decreased? No."

Noah Greenwald, who co-signed a petition to see the species officially declared as endangered or threatened, says the find is obviously good for his case.

"It's certainly good news and it confirms that there's still hope for the [worm]," Greenwald, who works at the Center for Biological Diversity, says. "The fact that they found them in a native prairie remnant confirms that they are associated with a habitat type that's incredibly rare."

Umiker says the cocoons have since hatched in the lab — producing baby worms they believe to be Giant Palouse worms. But it's still too early to tell, and Umiker says they're still trying to figure out less destructive ways of ID'ing them.

"The hope is that with the juvenile and the infants is that we can just swab the outside of their skin, pick up some skin cells and some slime and run DNA on it," he says, "so we don't have to kill them."

As the Worm Turns

By Leah Sottile and Joel Smith