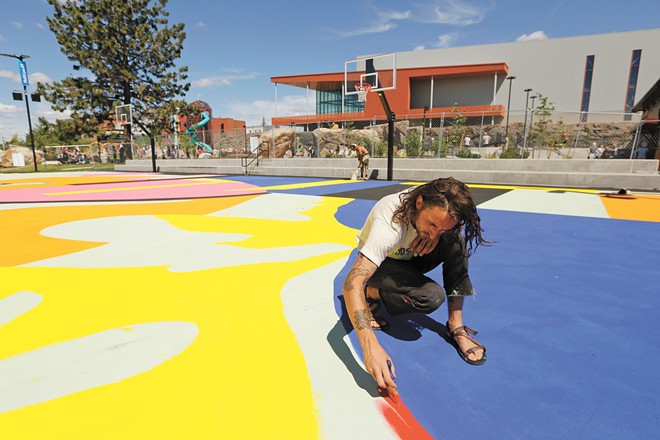 In early 2019, Matt Santangelo, executive director of the Spokane Hoopfest Association, was approached with a proposal. Riverfront Park had planned to include a basketball court in its renovations, and they wanted help. Spokane Hoopfest Association, which runs Hoopfest, Hooptown USA, AAU and other year-round programs, was the obvious choice. After all, over the years they've installed 33 basketball courts around the region.

Santangelo and his team were game, but they thought even bigger, wanting to "make it something special," he says, "a highlight for the basketball community."

Those courts — now a complex of two full courts, or five half-courts — opened in June and have quickly become community favorites. The complex would have been a centerpiece of Hoopfest 2021 before its cancellation due to COVID concerns. Hoopfest organizers announced last week they would offer full refunds to participants while encouraging people to donate all or part of their registration fees to help defray costs incurred trying to pull off the event this year.

Back in 2019, the Hooptown team wasn't sure where to start. "We didn't exactly know what we were building towards," says Santangelo, "but we had a vision."

That vision relied on four initiatives: building new community courts; maintaining some courts that needed work, and enhancing others by commissioning murals; creating a Hooptown USA Hall of Fame; and introducing citywide branding to solidify the Hooptown USA identity.

So Hooptown brought their vision to MultiCare Health System, Hoopfest's official medical sponsor. The meeting was set for 10 am on the Saturday of Hoopfest 2019. Santangelo, hot and sweaty from already traversing downtown Spokane for a few hours, made his way to the Davenport Grand Hotel for the meeting. Santangelo, along with colleagues Rick Betts and Kristi Hanson, delivered their presentation. You could say it went well, because later that day MultiCare pledged $1 million, spread over 10 years, to Hooptown USA as part of MultiCare's continuing efforts to improve the health of the Inland Northwest community.

"After 30 years, Hoopfest has proven themselves as an ideal teammate in partnering for healing and a healthy future," MultiCare CEO and President Bill Robertson remarked after the announcement in 2019. "We look forward to positively impacting health together in the Inland Northwest."

Then the Hoopfest Association team went to work.

For the last two years, Hooptown has delivered on that vision. They've enhanced existing courts by commissioning murals, via their Community Court Project. They've maintained the courts with their annual "Net Day," when a team of volunteers is assigned ladders and nets, and heads out to replace the net on any hoop they spot. Hooptown even lets visitors know, right at the airport, that they've landed in Hooptown USA. Another vision was to create a Hooptown USA Hall of Fame. And the most visible and enjoyed project of this Hooptown/MultiCare initiative: Hooptown USA's new signature courts, part of the City of Spokane's $70 million-plus renovation to Riverfront Park that's just wrapping up.

Just east of the new playground on the north bank of Riverfront Park, you can drop in on these signature courts any time, day or night, courtesy of the impressive overhead lighting. Even after 10 pm, over this past summer there were often more than 50 players laced up. One player, Charlie Markham of Spokane's South Hill, recognizes the impact of this new complex: "It brings everyone together," he says. "The runs are really good. It allows random people to team up and become friends."

Outside of pickup basketball, Hooptown will host basketball-inspired fitness classes and events with various area nonprofits on the new courts. They are also hosting women's pickup games as they hope to grow the women's game. In addition to MultiCare, other local institutions are finding ways to support Hooptown USA all year long. Embrace WA, for example, has kept connectivity through basketball alive during the pandemic. And the Kids Play Free by Avista initiative works with local youth to build their skills on and off the court.

During Hoopfest next year, on June 25-26, 2022, the new courts will be bustling — Hooptown even helped design the parking lot nearby so it could house 14 more courts. As Santangelo puts it, "There's not one thing that unites us as much as basketball." ♦ 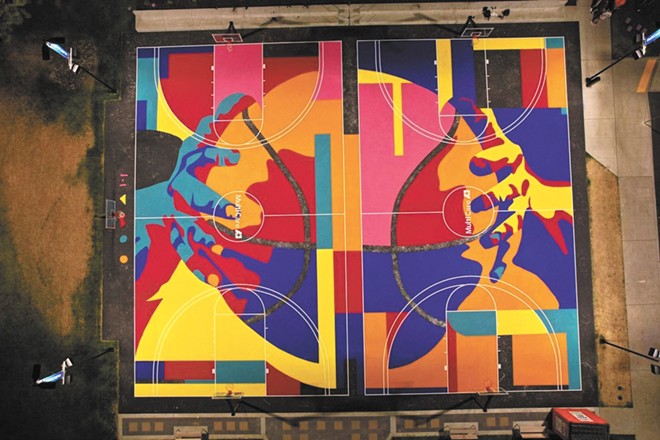 ook closely at the new Hooptown USA signature courts and you'll see you're playing on a giant piece of art. And it's all the work of local artist Joshua Martel

Believe it or not, Coeur d'Alene native Martel hasn't been painting his whole life. As a kid, he never thought about art much. But at 18, he suddenly had the urge to get into it. One day, Martel asked his friend to drop him off at the art supply store. He started painting on canvas but knew immediately he wanted to go bigger.

Soon he found a free wall in Seattle to paint — thus making him a muralist. Before he was approached by Hooptown USA to try out for the Riverfront Park courts mural, he'd painted several murals in the Spokane area, including working with the Hoopfest Association to paint the Chief Garry basketball court. After a call for artists from Spokane Arts, and factoring input from the neighborhood council, all agreed on Martel's "Over the Heart" design for the signature courts.

From the street, the vibrant mural is abstract, but from a bird's eye view, it takes on a whole different form. It displays a player holding a basketball over their heart. Martel said his motivation for this mural was to "create his own individual mark in Spokane."

And he needed all that motivation, as he painted the court in grueling, 90-plus-degree heat back in June. He and his assistants would work early mornings and late nights — sometimes pulling all-nighters to escape the heat.

Anybody would be proud of such a huge accomplishment, and Martel admitted that, "I'm not an emotional guy, but seeing everybody on the court was making me tear up."