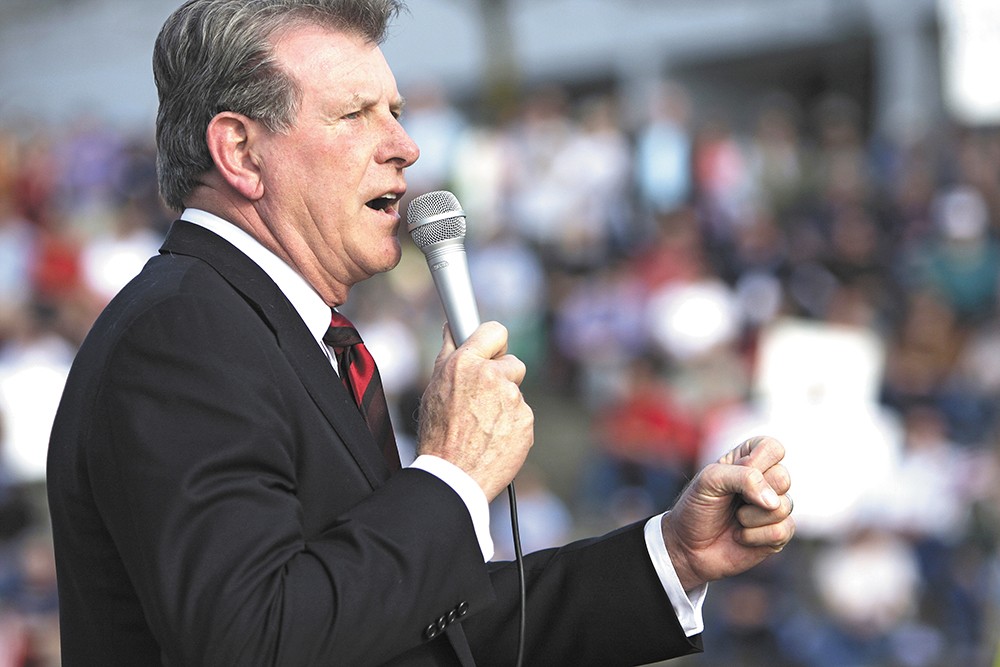 , the trends don't matter. It doesn't matter that Pew Research data shows a steady growth in acceptance of same-sex marriage or that a cascade of court rulings across the nation have toppled bans on gay marriage like the one Idaho voters passed in 2006.

"As governor, I don't get to pick and choose which parts of the Idaho Constitution I uphold and protect — no matter how 'inevitable' legal experts say the outcome may be," Otter says by email. "I take very seriously my responsibility to carry out the will of the people of Idaho as expressed through the democratic process."

That's been his argument throughout the past year of defending the ban as the rest of the country passed Idaho by. The state had dedicated $1 million to the fight and has spent just under $70,000 so far, according to Otter's office. Now, he may finally be running out of options.

"This is a momentous case for Idaho," says Deborah Ferguson, one of the lawyers representing four couples who sued the state over its ban. The couples won in a lower court this spring, a decision the state appealed to the 9th Circuit in San Francisco. "It means a great deal for its gay and lesbian citizens, having this very fundamental right to marry and being treated with the dignity and respect they and their families deserve."

Last week, the 9th Circuit ruled that bans in Idaho and Nevada "impose profound legal, financial, social and psychic harms on numerous citizens of those states." That came on the heels of the U.S. Supreme Court deciding it would not hear appeals to lower courts' rulings on same-sex marriage in five other states — a decision with major implications. Because those lower circuit courts, whose rulings the Supreme Court was upholding, each cover multiple states, the decision effectively brought the number of states with legal same-sex marriage to 30.

After the 9th Circuit ruling, Otter's team quickly requested and won a temporary stay, keeping Idaho marriages on hold, from U.S. Supreme Court Justice Anthony Kennedy, who oversees the 9th Circuit. By the end of the week, the Supreme Court lifted the stay, but the state still needed an express order from the 9th Circuit to actually start issuing marriage licenses.

For couples across the state, "It's been quite the roller coaster," says Ferguson, whose clients will try this week for the third time to get an Idaho marriage license. Couples had lined up at courthouses after the 9th Circuit's ruling only to leave disappointed when Kennedy issued the stay. After the removal of the stay, a clerk in Latah County began issuing marriage licenses, but others held off for the 9th Circuit order. The Columbus Day this Monday added yet another delay. Finally, the 9th Circuit ruled that marriages could begin Wednesday at 9 am.

If Idaho's leaders decide to keep fighting, they can ask the Supreme Court to hear the case, but in light of the past week it's unlikely the court would. University of Idaho constitutional law professor Shaakirrah Sanders, who has been following marriage rulings across the country, says there is one academic element of Idaho's case that gives it a slim chance. The 9th Circuit ruling argues that laws based on sexual orientation should face "heightened scrutiny." In other words, like laws that divide people based on their race or gender, those based on sexual orientation are "inherently suspicious," Sanders says. Even though the outcome — marriage equality in Idaho — would be unlikely to change, the court could still hear the case in order to rule on whether sexual orientation should be considered like race and gender.

Or, of course, the state could step aside, and Otter may finally be ready to do that.

"I continue to believe that the federal courts are mistaken in abandoning the sanctity of traditional marriage and in undermining the will of Idaho voters and each state's right to define marriage. But we are civil society that respects the rule of law," Otter said in a statement this week. "We have done all we can through the courts for now to defend traditional marriage in Idaho." ♦

The Tide Is Turning

In first year of marriage equality, 17 percent of Washington weddings between same-sex couples