A group in Hillyard wants to borrow school district land to test green technologies. The district has its doubts 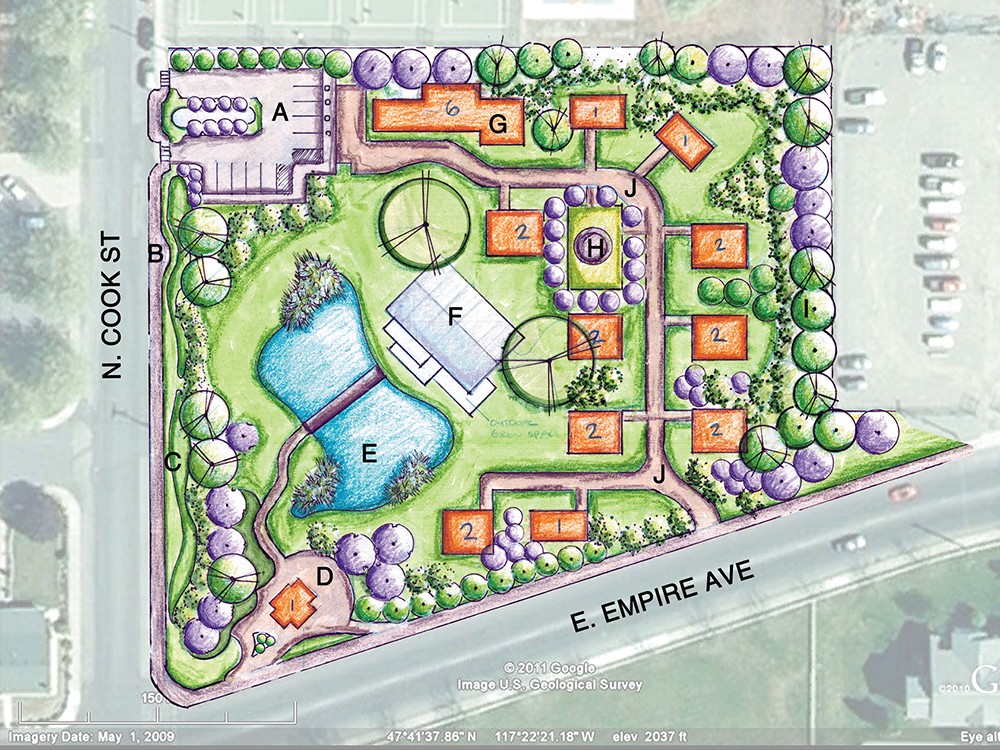 The conceptual design for the Hillyard Village Project

On an empty lot across the street from the Northeast Community Center, littered with dead leaves and the occasional plastic bottle, Richard Burris sees the future of Spokane.

There, in the far corner, will be a reflection pond. A bit closer, the greenhouse where they’ll grow produce to sell to individuals and local restaurants. He points at a purple pathway that snakes through a map of the community’s proposed design. “That’s for these,” he says, pounding his fist on the seat of the electric golf cart he drove here.

Burris, soft-spoken with a background in city planning and transportation, is leading an effort he calls the “Hillyard Village Project,” in hopes of turning this 1.8-acre lot into a development where participants will live on site, test new technologies like alternative energy sources, and measure their use of resources. He envisions people driving electric carts, solar panels producing energy, a greenhouse where food is grown year-round and a system that recycles gray water to water vegetation. It would be a way to prove which of those efforts can work and to provide the city with data no one is currently measuring.

“Everybody says, ‘Gee, if I put up a solar panel, it will really help me save electricity.’ OK. How much is your return on it, really? How much sewage do you really generate? We don’t know these answers,” Burris says. “It’s not so much that I expect somebody to say, ‘Let’s tear down Spokane and build it like this village’ … [But] we can give people options.”

Underpinning the effort — modeled in part after a similar project on the Massachusetts island of Martha’s Vineyard — is the belief that because of global conditions today, we’ll need to adopt ideas like these to save our planet and our pocketbooks. Bob Scarfo, a landscape architecture professor at Washington State University, teaches college students and a class at Spokane’s On Track Academy about the project and asks them to help design it. He starts with lessons about climate change, water scarcity and the high costs of modern food production.

“I say, ‘We have this opportunity and this piece of land,’ How can we begin to develop a neighborhood that anticipates the pressures coming our way?”

But for all the hopefulness — Burris says he’s willing to take out loans or get grants and has plenty of prospective renters — organizers still face a major challenge. Spokane Public Schools owns the lot, and decision makers there are concerned about the liability that could accompany an experimental project like this.

Spokane Public Schools Purchasing Director Kathy Ely worries about whether the village would follow rules set by the city’s health, ecology, water and sewer departments. In an email to Spokane City Council President Ben Stuckart in October, Ely wrote that “the district does not see the added benefit of having this on our property to the extent that it has been presented to date.” That’s on top of uncertainty about whether the land, just up the street from Shaw Middle School, might be used for that school’s expansion in the future.

Ely says she’s asked Burris about some of her concerns about the village and “got very little depth” in his responses.

“It was just not very comforting in terms of who would be taking on the liability and the responsibility,” she says.

Now Stuckart is trying to help ease those worries. The Spokane Regional Health District has already sent a letter supporting the concept to the school district, and Stuckart wants the City Council to do the same. Outspoken about climate change and other environmental issues, Stuckart hopes council support could help the project gain traction and promote energy-saving measures.

“The folks up in Hillyard are very forward-thinking and it’s part of our job as City Council to help them move projects forward,” he says.