Emerging hip-hop artist and newcomer to Volume, KarmaKnows might be the antidote needed to jumpstart summer. His unique blended of hip-hop and R&B off of his recently released project Sugar will have you singing, dancing and wanting more.

The Lavender Flu conjure forth strange brews of sensual ephemera — a minute-and-a-half of LSD-induced paranoia, kaleidoscopic lens flares, a barstool epiphany lost in the ether. The bombast is earnest, the pretense is nil, the weirdness is intoxicating. You'd never guess the band is from Portland. 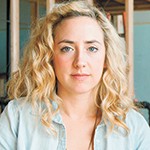 Wild Ones is one of my favorite live bands. They have a really creative energy and dynamic live show. It's a mix of rock, synth, dancey grooves and dreamy textures.

In all honesty I know very little about Great Spiders, but to me that is the point of Volume — getting a taste of something, then fully discovering them live. Their Facebook page lists them as "Kurt Cobain and Dad style 'Blues,'" which leads me to believe they make music specifically for me. Dad jokes aside, I am really drawn to the seamless yet messy transitions from one style to the next, hints of artistic sarcasm and wise, natural songwriting.

The name was unfamiliar, but when I noticed a couple of folks from legendary Northwest bands like Wipers and Pierced Arrows playing in the band, I pointed my ears toward Jenny Don't and the Spurs. And I loved what I heard — some genuine old-school country sounds led by Jenny Connors' killer voice. A little bit outlaw, a little bit retro, a whole lot of fun.

I've lived in the Northwest for years. I pay pretty close attention to the regional music scene. I'm a power-pop obsessive. So I don't know how I missed the existence of Supercrush, but I'm glad I don't have to live any longer without them in my life. The Seattle-based band has only four 7-inch records to its name, but each of those eight songs is a slice of pitch-perfect power-pop: strummy and crunchy and dreamy and catchy in all the right ways. Unfamiliar names in festival lineups usually end up being a decent way to kill an hour. Not this time. This time, I found a new favorite band.

I'm really excited for Saturday's first show, Drunk on False Enlightenment. Sean Glasow is an absolute wizard at the boards, making fascinating sound clashes that are really hypnotic. I saw him play a show in a basement once and it was virtually life changing.

Every time I check out a project by local Norman Robbins, I come away impressed. BaLonely might be my favorite thing he's done so far. This pop trio soothes the jittery pent-up energy of his solo act Jan Francisco, but he's still channeling the restlessness of Talking Heads and the laconic self-awareness of the Velvet Underground.

The original print version of this article was headlined "Expert Advice"