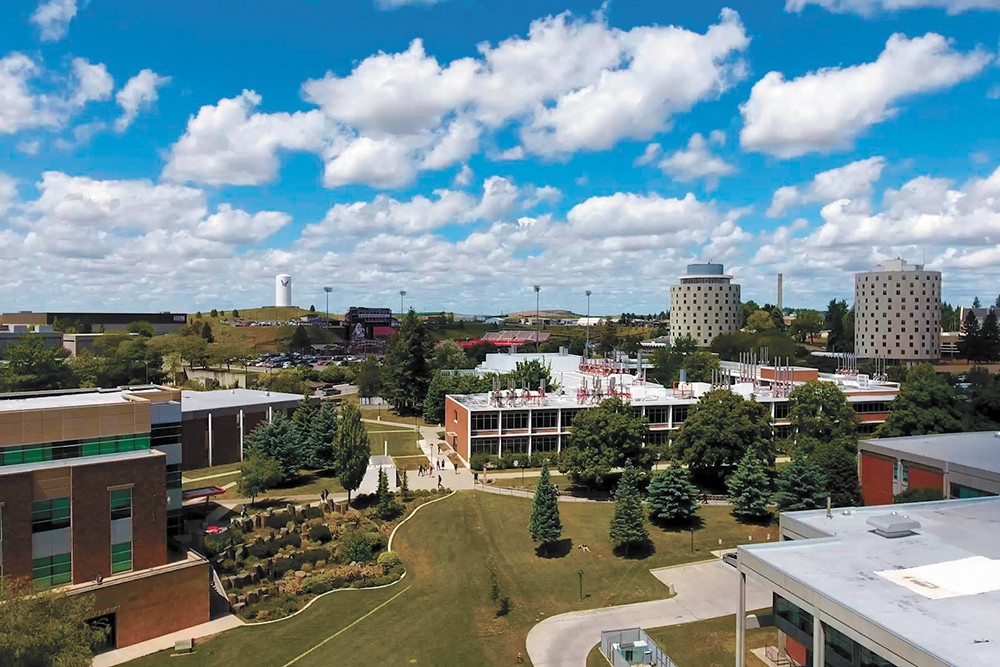 When Gavin Pielow chose to go to Washington State University, he knew his parents couldn't afford to pay his tuition. Instead, he thought he'd qualify for state financial aid.

But Pielow, who graduated from WSU a couple weeks ago, never saw that financial aid from the state. He was one of thousands of students who qualified for the Washington State Need Grant each year but was put on a waitlist as the program's funds ran dry.

"It was frustrating to see that program consistently underfunded," Pielow says.

That amount of student loan debt is about normal these days for a WSU grad. Other students have had it worse. Pielow says he's heard countless stories about students not being able to afford basic necessities because they have to pay tuition, who have dropped out of college altogether because it wasn't affordable, or who take out so much in loans that it cripples their future.

Those stories, however, are about to become far less common in Washington state. On Tuesday, Gov. Jay Inslee signed a bill that will eliminate the wait list for financial aid. More than that, it guarantees that students coming from families making up to the state's median income — $92,000 for a family of four — will receive some state financial aid. And for families of four making 50,000 or less? Their tuition will be completely covered.

The bill's name, the Workforce Education Investment Act, may be yawn-inducing, but it's expected to vastly improve college affordability for low and middle-income families. It gives them incentive to enroll in two or four-year colleges and apprenticeships while reducing their student debt.

And as presidential candidates unveil ambitious plans for free or debt-free college, national experts say Washington's plan does more than any other state to address college affordability.

"I don't think you will see any other state with a need-based approach to financial aid that reaches into the middle class like this will," Meotti says.

This isn't the first time the state's investment in college institutions has made waves this decade. State Republicans, who controlled the state Senate for years until 2017, focused on reducing the costs of college not through financial aid, but by lowering tuition.

It was nationally significant: As most of the country saw the price of college climb, Washington's students saw it level out or go down.

But Gov. Inslee has been calling for the state Legislature to expand financial aid as well. And now that Democrats control both the House and the Senate, there was some optimism that it could get done this year. The only problem was finding a way to pay for it, says Rep. Drew Hansen (D-Bainbridge Island), chair of the House Higher Education Committee.

The final bill settles on a hike in the state's business and occupation tax for about one-fifth of businesses who pay the B&O tax, with the highest surcharge on companies like Microsoft and Amazon. But those tech giants weren't opposed to the tax; in fact, they cheered the new legislation, with Amazon calling it a "positive step forward" for the state.

It's expected to generate around $1 billion in revenue over four years. That allows the state to create the Washington College Grant starting in 2020, which will replace the State Need Grant. It will eliminate the wait list for the grants by one-third next year and all the way by the following year.

"We want every family in this state to realize that they now have a shot at a college or apprenticeship that they might have thought was out of reach," Hansen says.

And there was still money left for the state to make targeted investments in higher ed, including millions for community and technical colleges and the funding for WSU's medical school to expand. Hansen envisions the revenue from the B&O tax to grow over the years, which ideally would enable the state to raise the cap on who could qualify beyond the $92,000 limit.

By making financial aid accessible to everyone up to the median income and devoting millions for higher ed programs, Washington separates itself from other states, says Sara Goldrick-Rab, a Temple University professor who wrote a book on the subject called Paying the Price: College Costs, and the Betrayal of the American Dream. Other states have tried aspects of Washington's plan: Oregon and Tennessee made tuition free for community colleges. New York, meanwhile, has a program giving free tuition for two and four-year colleges for families making $125,000 or less — as long as you live and work in New York. And other programs often apply only to new high school graduates.

"Washington has avoided all that nuttiness," says Goldrick-Rab.

A person who has started college but never finished can go back to college more easily under this plan, for instance. And the state grant would be on top of any federal financial aid available — it wouldn't cancel it out. Washington, too, will continue to offer financial aid to those attending private colleges and universities in the state.

Bruce DeFrates, director of financial aid and scholarships at Eastern Washington University, says this is the biggest leap he's seen in state aid in his 20 years there. And it may be particularly beneficial for EWU, where more than 75 percent of undergraduates receive some form of financial aid.

"It pretty much puts Washington at the top of states that are supporting higher ed," DeFrates says. "We've got one of the best state-need programs once this goes into effect."

But should free college for all be the end goal?

Sandy Baum, a nonresident fellow at the Urban Institute, likes the changes Washington made to its financial aid sytem. But she argues the larger, federal free college for all proposals are an overreaction to the skyrocketing tuition prices. Aid money should be given to those who need it, not families who actually can pay for college, she says. And due to educational inequalities starting in grade school, wealthier kids are more likely to seek the more prestigious, expensive programs, which could in turn mean high-income families end up with more help than low-income families.

That, she says, is the opposite of a progressive policy.

"It's directing resources to the people who actually aren't the ones who really need that," Baum tells the Inlander.

Those resources would be better spent helping the people at the bottom of income distribution and going toward institutions that can use the money to improve student outcomes. For example, if a university provides support for a college student so they can graduate in four years instead of five, that student saves thousands of dollars.

Experts may disagree on whether free college for all is a good plan or not. Goldrick-Rab, while not directly responding to Baum's comments, says the notion that free college subsidizes the rich is "bullshit." In her view, that fails to understand the politics of financial aid. Middle class support is crucial for these programs to be sustainable, she says.

Yet, both agree Washington's plan appears to be moving in the right direction. Goldrick-Rab maybe would have raised the cap above the median family income, but she says she's "hard-pressed" to figure out what folks would have a real problem with.

And Baum says Washington's approach of helping lower and moderate-income families rather than affluent ones is a good start.

"It does sound like Washington has thought more carefully than some other states about how to create nuances in the program," Baum says. "Not just say, 'It's free,' but to do some thoughtful things to make college more affordable and accessible." ♦

The original print version of this article was headlined "'Quantum Leap'"