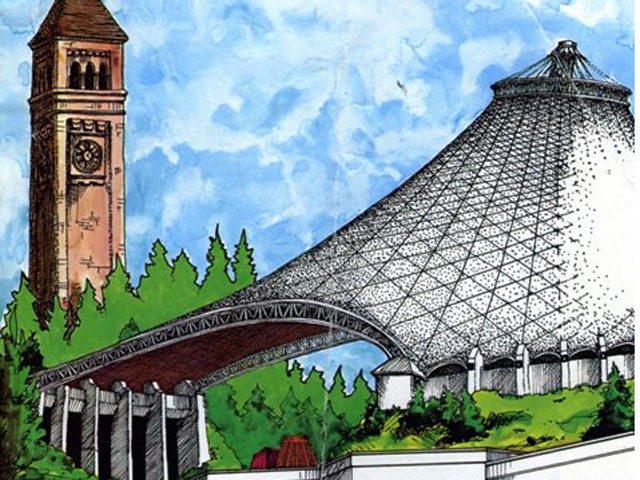 On April 22, 1970, when Americans celebrated the first Earth Day, they had no idea of the central role Spokane would soon play in the movement. But Spokane was already laying the foundations for the first-ever environmental world’s fair. At the time, supporters of urban renewal, led by King Cole, had no plans for a major exposition in Spokane. They were eager, however, to push back the urban blight that hid the falls and tarnished the city.

During the next four years Spokane became a center of environmentalism and emerged as the smallest city on Earth ever to host a world’s fair. “Preserve the Environment” became its official theme.

Spokane was both burdened with and stimulated by its subject. Other possible world’s fair themes, such as “communication,” would simply have required Expo to assemble a variety of exhibits. Who would have thought to ask whether Spokane itself was a model of communications excellence? But the ecological theme brought with it the expectation that Spokane would undergo a kind of cleansing to establish its own “fresh new environment.”

Expo backers constantly used the rhetoric of ecology, but critics of the fair questioned the sincerity of their commitment. One citizen wrote the Spokesman-Review, saying, “Just what is Expo all about, really? Is it just another gimmick to attract tourists to the city, or is it an honest effort to promote ecology and the preservation of our environment?” Another critic claimed, “The people who are putting on Expo are eco-phonies.” Ed Reynolds, who edited the Spokane Audubon Society newsletter, complained that Expo backers “hadn’t done their homework. They seized upon environmentalism as a catchword of the day.” He recalled an Expo official, with whom he discussed water pollution, needing to go home and look up “aquifer” in the dictionary.

David Peterson, an Expo official, admitted that the environmentalists had cause for complaint. “I suppose if I had been them,” he said, “I would have been angry, too. They were saying, in effect, ‘All my life I’ve been an environmentalist, and you didn’t even know what the word meant, and now you’re putting on the fair that says ‘environmental’!”

Despite such complaints, when we look back on Expo from the vantage point of 36 years later, the genuine environmentalism of the fair stands out. In some cases, though, the commitment may have been no more than a bow to popular culture. Among the entertainment groups at Expo were the “Ecology Kids” from Mount Vernon, Ohio, and the “Great Corvallis One and Only Recycling Band.”

One of the slogans for the fair, considered by the planners, was: “How Man Can Live, Work and Play in Harmony With His Environment.” Congressman Tom Foley thought that this was “a little airy.” He said it sounded like “hopping and skipping through the tulips and by the fountains.” At the opposite extreme, planners considered the theme “World Survival Exposition” — as in, Maybe We Won’t Survive. Expo settled on a more encouraging slogan: “Celebrating Tomorrow’s Fresh New Environment.”

This was a good start, but what could Expo do to move the city and the planet toward this “fresh new environment”?

Spokane’s Expo environmentalism took many forms, including efforts to clean up the city and the river, as well as providing solid ecological content at the fair. Recycling was virtually unknown at the time of Expo, but various civic groups began campaigns to collect cans and bottles around the city. One of the most publicized efforts was the erection of an “environmental Christmas tree” on the world’s fair site a few months before the fair. Students in Spokane collected 40,000 beverage cans, which were strung in the shape of a Christmas tree on wires from a 120-foot pole.

Another project dealt with real trees and left a permanent legacy for the city. The trees that line many downtown streets were planted on the eve of Expo ’74.

At the exposition itself the environmental theme was ubiquitous. One observer noted that the international pavilions almost seemed to be competing to establish their nation as the world’s worst enemy of the environment. A film in the German pavilion, for example, noted that while all nations are “litter louts,” Germany could claim special distinction in generating “polluted air, contaminated water, mountains of garbage, and incessant noise.”

Writing for the New Yorker, Calvin Trillin noted that while other world’s fairs had introduced the telephone, the escalator, and the Belgian waffle, Spokane’s Expo ’74 would be associated forever with the “institutionalized mea culpa.”

While the worldwide environmental crisis was one of the themes of the fair, the most important feature of Expo was an environmental triumph. During most of the century before the world’s fair, Spokanites had blighted the natural beauty of Spokane Falls with dams, mills, railroad trestles, roads, parking lots, and an industrial laundry. All that changed during the years leading up to the fair. King Cole, the spiritual father of the fair as well as its principal organizer, felt his life had been fulfilled when he first saw the river with the trestles removed. The transformation of the falls site to a major urban park is one of the most significant environmental legacies of any world’s fair.

In 2008, Shanghai TV sent four film crews around the world to produce a major documentary on world’s fairs. One of the directors read about Expo ’74 in a library in Shanghai and came to Spokane well-versed in the history of our fair. The film, which was released last year, in anticipation of the huge world’s fair in Shanghai this year, begins with an overview of the first Earth Day and then moves to Spokane’s fair, with historical footage, contemporary interviews, and beautiful images of our falls by the Chinese crew.

Sometimes we have to see ourselves from the outside, as others see us, to recognize fully our own history — and in this case to recognize the importance of Expo ’74 in the world-wide history of environmentalism.

William Youngs is a history professor at Eastern Washington University and the author of The Fair and the Falls.

Born out of the environmental movement of the late ’60s, Earth Day turns 40 this week. To mark the occasion, we decided to take stock of our successes and failures, asking local activists and thinkers to consider how far we’ve come and which issues need our attention now.