The creation of Riverfront Park transformed Spokane — could an upgrade do the same? 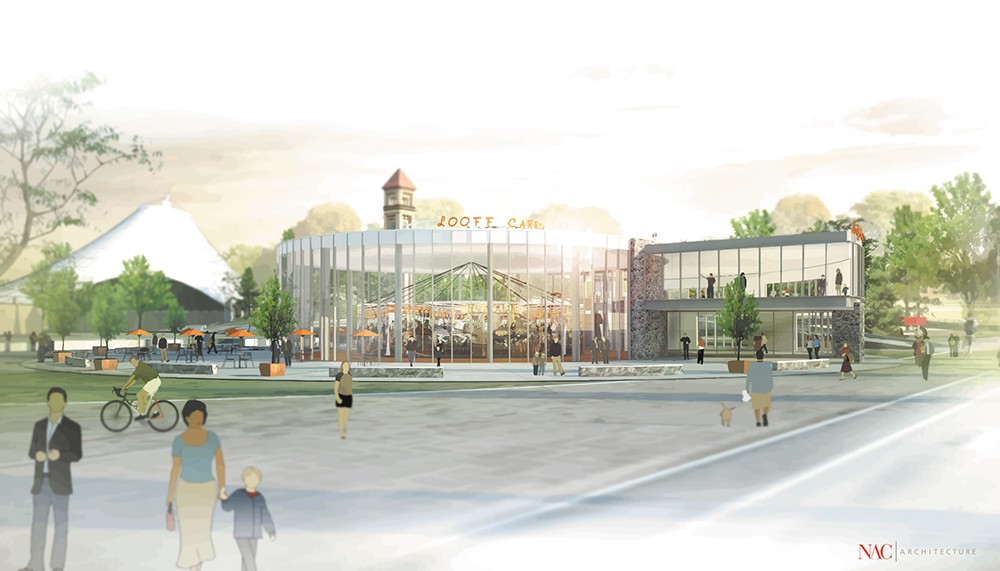 Spokane is the rare city

that can brag that its most iconic landmarks all stemmed from one crazy party it threw for Planet Earth 40 years ago. Riverfront Park, the skeleton of the U.S. Pavilion, and the garbage-eating goat statue all came from the 1974 World's Fair.

Expo '74 not only turned a tangle of railroad trestles, parking lots and warehouses into the city's most famous park, it brought Nordstrom to downtown and converted the old Flour Mill into a shopping center.

The six-month fair took $300 million (and that's in 1974 dollars) to pull off; its impact on Spokane remains incalculable. Consider this: It took 35 more years for a different swath of abandoned railroad property — Kendall Yards — to even begin the same sort of transformation.

"We have one of the most amazing urban parks along the river anywhere in our country," says Spokane Parks and Recreation Director Leroy Eadie. "That's for sure."

But Expo's staging ground, Riverfront Park, is showing its age after four decades. "What's happening behind the scenes really is a comprehensive failure of the infrastructure," Eadie says. The Looff Carrousel's roof sprung leaks. The Pavilion, at one time Expo's epicenter, lost its covering, degrading into a skeletal structure over ramshackle amusement park rides.

The Riverfront Park Advisory Committee, chaired by Inlander Publisher Ted McGregor Jr., met for months to dream up the next step for Expo.

The day before Expo '74's anniversary, the Spokane Park Board approved a master plan intended to move away from the cloistered sections designed for Expo's different cultures toward a much more open park. At Riverfrontparkmasterplan.org, you can see visualizations of a few of the committee's concepts for the park's future. The central spine of the project would be a sprawling north-south promenade toward Howard Street, complete with bike paths and pedestrian trails.

"It'll be a great place to show off art and sculpture," Eadie says.

The carousel would be housed in a larger building, while the Pavilion would once again be covered — possibly with a dome to preserve the iconic structure — and used as a year-round event center to host Hoopfest games, Bloomsday awards, summer concerts and outdoor films. The Ice Palace skating rink would be moved to another part of the park and used as a farmers market during the summer.

An old parking lot would become a giant educational playground, with climbable elements based on geological features created by the Missoula floods.

That's all contingent on Spokane voters approving $64.3 million in bond funding in November 2014. The bond is structured in a way that wouldn't require raising additional taxes, but skeptics of the plan have already raised complaints about cost, necessity and the plan to remove the amusement park rides and the IMAX Theatre.

"We had to make tough decisions about things that make sense financially," Eadie says. ♦