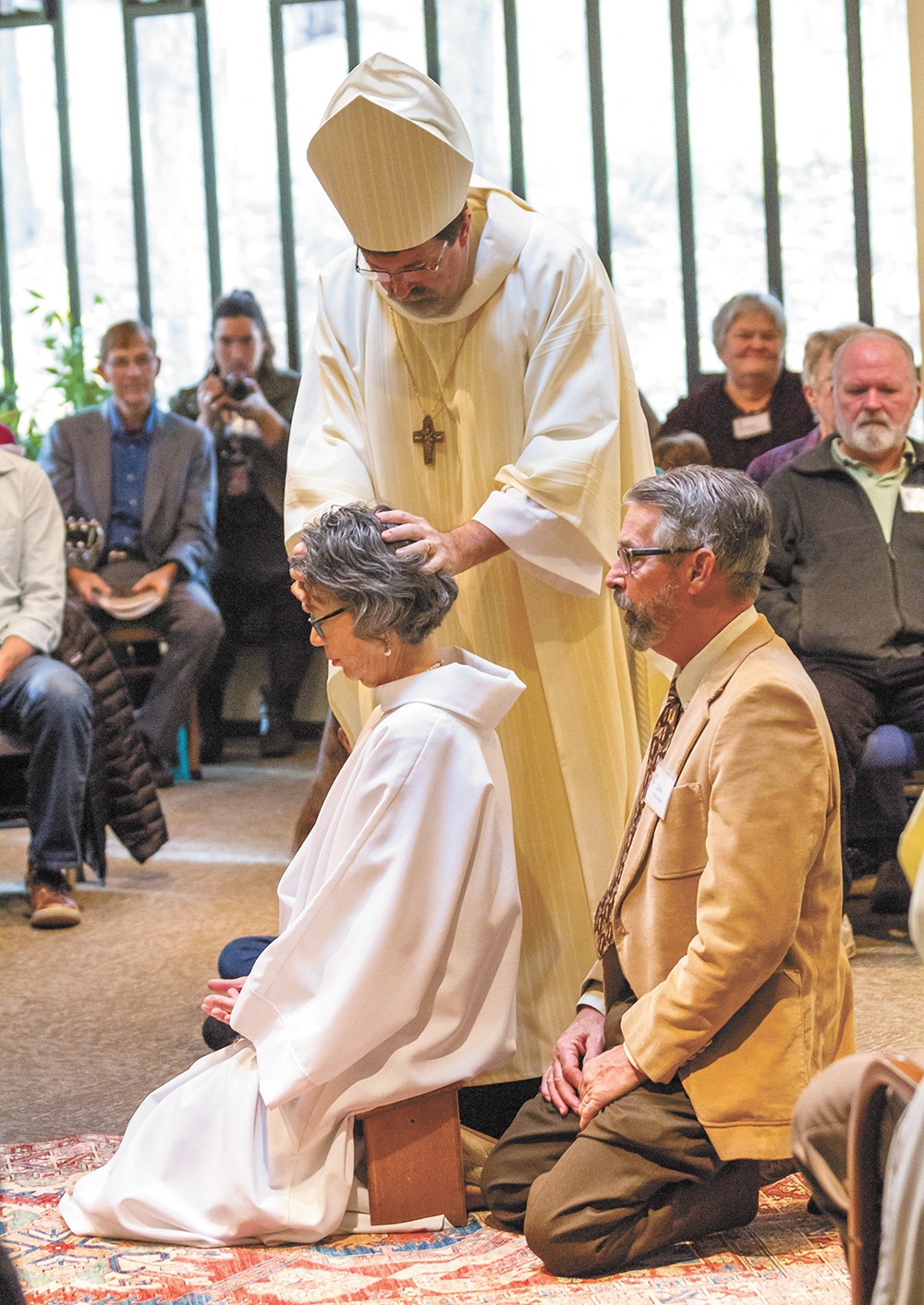 Jeff Ferguson
Linda Kobe-Smith, accompanied by her husband, Dan, is the first woman to be ordained as a priest in Spokane, and the second in the entire state.

Several camera phones point toward the soon-to-be-ordained priest in the middle of the room. Draped in a bright white robe lit by sunlight beaming into a small chapel in northwest Spokane, a bishop finishes the "laying on of hands," a Catholic tradition for the ordination of priests. He then invites any members of the congregation to come forward and lay hands on the church's newest minister as a showing of community affirmation. Almost all get up.

Giving the entire congregation a chance to lay hands on their new priest is not common practice in the Roman Catholic tradition, but this isn't a Roman Catholic congregation. This is a service for the Ecumenical Catholic Communion, a faith system that follows most of the Catholic tradition but distinguishes itself on several key points. The other significant difference for this particular ordination? The priest kneeling in the middle of the room is a woman.

For the past three years, Linda Kobe-Smith has attended St. Clare Ecumenical Catholic Community, and in the spring of 2014 its members voted to call her to be ordained as a priest — or rather, priestess.

"I've already been presiding and preaching, so this is just a continuation of what I've been doing for 30-something years," she says. "Now I'll be able to do it a little more publicly, and I carry the blessing of the community."

Ecumenical Catholicism follows many of the same core beliefs of the Roman Catholic tradition, including all seven of the sacraments, but has carved out a place for itself by promoting inclusivity. In an age where equality regardless of race, sexual orientation or gender has been pushed to the forefront of public dialogue, Ecumenical Catholicism offers a place to worship for progressive Catholics who don't agree with some traditional teachings.

Kobe-Smith, 65, was raised in a Roman Catholic household

and attended a fairly conservative church in Utah as a child. She remembers attending all-Latin mass, for example, before the Second Vatican Council from 1962 to 1965.

For a while after Vatican II, Kobe-Smith remembers thinking that the church might be headed for the institutional change she thought was necessary. By the 1970s and '80s, though, it was obvious that wasn't going to happen. Only men could be priests, and bishops still appointed them, sometimes without much input from the laypeople. Despite the hierarchical structure, she continued to go to church.

In 1983, she enrolled in a four-year program for a Masters of Divinity at Gonzaga University. Known as an M.Div., the degree is typically one of the requirements to become a Catholic priest.

It was during this time that her eyes opened wider to the breadth of religious scholars — particularly women scholars — and she began questioning Roman Catholic traditions more seriously.

"What I appreciated about them was that they opened so many doors, rather than keeping God in a really tiny box," she says. "Somehow God is only defined in maleness, or by heterosexuality, or by one small piece of the prism. I think if we don't have the ability to wonder, or be perplexed or astounded, then whatever perception we have of God is going to be very, very tiny."

In 1993, she was hired as a pastoral assistant at St. Ann's Catholic Church in Spokane, a title given to those who aren't qualified for priesthood. At that time, the parish priest was a member of the Order of Franciscan Monks, headquartered in Santa Barbara, California. He would come to Spokane occasionally, but for the most part Kobe-Smith ran the show. She did everything from preaching to marriage preparation, but still couldn't perform any of the sacraments. She says the parish emphasized the community over church leadership.

All that changed in the mid-1990s when the Franciscans left, and the parish came back under the control of the Catholic Diocese of Spokane.

Kobe-Smith continued as a pastoral assistant until 2003. Frustrated with the top-down approach and exclusionary rules, she went churchless for nearly 10 years (though she continued studying with friends).

Ecumenical Catholicism got its start

after the First Vatican Council in 1869-70, which decided that the pope had complete infallibility, or universal jurisdiction, over the entire Roman Catholic Church and its adherents. Many Europeans didn't agree. They continued to live their lives as Catholics without recognizing the pope's authority. Although not called the Ecumenical Catholic Communion, as it is today, their system of beliefs stem from that schism.

The belief that women cannot be ordained as priests, for example, comes from Jesus' 12 apostles, all of whom were men.

"Jesus named 12 apostles and they were all men, but he also empowered women in many ways beside the priestly office," says Bishop Thomas Daly, who presides over the Catholic Diocese of Spokane. "The church changes some things, but others are so fundamental that they have remained the same."

Ecumenical Catholics take a more decentralized approach to church hierarchy and morality. For example, in the Roman Catholic Church, a bishop is responsible for appointing priests to each parish within his diocese, and can do so without the input of the laypeople.

"As a bishop, in consultation in a group of five priests, I assign a priest to a parish," says Bishop Daly. "I would get input from the community, and try to match it, but in Catholicism there is a committee [of clergy]. It's not a democracy."

In Ecumenical Catholic Communions, the congregation votes to call a priest to be ordained, and the qualifications are still the same: a psychological evaluation, background checks and preferably a Master of Divinity.

With headquarters in St. Louis, the Ecumenical Catholic Communion first put down roots in the U.S. in 2000, and has now spread throughout 51 churches in 20 states, with an estimated membership of about 10,000. Washington state has two other ECC parishes, in Olympia and Seattle.

Despite a recent Pew Research survey that found many American Catholics are leaning toward more progressive opinions — including remarrying after a divorce, the use of contraceptives and acceptance of homosexuality — and some are leaving the church as a result, the Catholic population in Eastern Washington remains steady. According to numbers from the Catholic Diocese of Spokane, which includes parishes throughout Eastern Washington, membership has grown slightly, from 107,271 in 2013 to 108,559 in 2015.

"We're not trying to compete against the Roman Catholic Church," says Bishop Tom Altepeter, who started St. Clare in 2012. "This is a way to include those who feel excluded or have been excluded."

About 100 people fill the small chapel

surrounded by evergreens, just off the Centennial Trail. The congregation is almost double that of a normal Sunday morning.

"It's like seeing the Beatles," says Helen Evans, a longtime friend of Kobe-Smith. "It's something I'd never thought I'd see before I die."

Friends and family of Kobe-Smith traveled from Pullman, Colville and Seattle to witness her ordination. Some members of St. Ann's came to show their support as well.

"This moment highlights who we aspire to be," Altepeter tells the congregation during his sermon. "And it has emerged out of many community discussions. In the eyes of Jesus there is no distinction between black and white, straight and gay, male and female."

Afterward, when the congregation recites the Lord's Prayer in unison, they begin with "Our Mother and Father in heaven... " They have a gluten-free communion option as well.

"I didn't leave the Roman Catholic Church in order to be ordained," Kobe-Smith says. "I left because I needed a different life, and I found St. Clare to be life-giving. Whether I was ordained or not, I would have been happy." ♦