To the experts who follow extremist violence, September's presidential debate was alarming. It wasn't just that President Donald Trump refused to commit to a peaceful transition and continued to whip up conspiracy theories. It was that, when his opponent and the moderator pushed him to explicitly condemn the Proud Boys — a far-right extremist organization that glorifies street fights — Trump decided to go in a different direction.

To many Proud Boys, "stand by" didn't sound like a condemnation. It sounded like military instruction from the commander in chief.

"Proud Boys all over the place were like, 'Yes, sir, we're standing by!" says Jessica Reaves, editorial director with the Anti-Defamation League's Center on Extremism.

A few days later, Trump attempted to clean up his answer on Fox News.

But according to Reaves, the Proud Boys — like many extremist groups — found ways to explain away his condemnation.

"They have convinced themselves that the president is talking directly to them only when he says the things that they want to hear," Reaves says.

The Proud Boys are just one reason why both law enforcement and observers are bracing for the possibility of a spate of election-related violence. While Washington state's entirely mail-in voting system largely protects the voters from intimidation at the polls, the question of what happens after the election continues to loom. (Idaho will have a mix of mail-in and in-person voting.)

If Biden wins, will armed right-wing extremists follow the lead of a president poised to claim that unusual ballot counts — as is expected with a late surge of mail-in Democratic votes — are evidence of a stolen election? If Trump wins, will there be riots from those who believe four more years of Trump will destroy America?

Experts like Reaves have tried to strike a crucial balance: warning about extremism, but trying not to inadvertently suppress votes by sensationalizing the fear.

"We're not concerned that there's going to be a 'civil war' before the election," says Reaves. "I usually follow that up with an addendum: Who knows what happens after the election?"

A LIT FUSE
The 2020 election result will be just one more ingredient in an already boiling stew of tensions around race, police, riots, a pandemic and conspiracy theories.

"There's this roiling anger just below the surface," Reaves says. "We've seen it all too many times in the last several weeks manifest as violence."

According to a recent Politico article, a September poll showed that 44 percent of Republicans and 41 percent of Democrats said that there would be at least a "little" justification for violence if the other party's nominee wins the election.

When Trump won the 2016 election, the city of Portland responded with six straight days of protests. But those protests, despite the pleas of organizers to avoid violence, sometimes descended into riots, with masked anarchists bashing out storefronts and car windows. A TV station's cameraman was attacked by those in the crowd. A 14-year-old kid shot and wounded a protester.

Ever since, Portland has become the battleground for frequent physical skirmishes between left-wing groups like antifa — militant, loosely organized activists who argue that violence, even "proactive" violence, is justified to combat the far-right — and far-right groups like the Proud Boys. And into these fights, the police have lobbed barrages of rubber bullets and tear-gas canisters.

Maybe the direction Portland went in after 2016 was an exception. Or maybe it was foreshadowing.

In Spokane, Police Chief Craig Meidl says they're constantly looking west to Seattle and Portland, watching the recent spate of protests, the riots and the police responses, hoping to learn about the sort of challenges the Lilac City could face.

"We've never seen anything after a presidential election in Spokane," Meidl says. "But we also never saw anything like May 31."

Meidl's referring to the first major George Floyd protest against police brutality in Spokane, when a handful of protesters began throwing rocks at police officers, smashing out downtown windows and looting stores. For the first time in decade, his officers made the controversial decision to use tear gas on a crowd.

"We definitely feel like we're in a new season, not just nationwide, but even in Spokane, in terms of our awareness of what can happen," Meidl says.

It's not just on the left. Caravans of Trump supporters have started flocking to major cities where the protests are being held, adding fuel to a fire. Kyle Rittenhouse, the 17-year-old self-proclaimed "patriot," crossed state lines for a rally in Wisconsin and ended up killing two protesters with an AR-15-style rifle, authorities say. He argues it was self-defense.

In Michigan, the FBI recently arrested militia members who allegedly plotted to kidnap Michigan Gov. Gretchen Whitmer. In Washington state this year, a group of far-right activists in Thurston County sought the backing of the local sheriff to conduct a "citizen's arrest" of Washington Attorney General Bob Ferguson. (The sheriff did not give them the green light.)

Meanwhile, figures like outgoing state Rep. Matt Shea (R-Spokane Valley) have continued fanning the flames. Last month on his radio show, he argued that COVID-19 is a globalist control scam, that the Black Lives Matter movement is "under the influence of evil" that is "attempting to overthrow the United States of America and eviscerate our Constitution," and that wildfires might have been "a coordinated attack as part of a ramp-up through the election by these socialist and communist forces in America."

Reaves, of the Anti-Defamation League, says, "Political leadership needs to dial down the rhetoric. We just see this really elevate heightened language across the board, and I feel like that's incredibly dangerous."

Reaves stresses that most of the deadly extremist political violence in America has traditionally come from the right. So while far-left radicals may throw rocks or bottles or break windows, firearms can be deadlier.

"There's less of an embrace of gun culture on the left," Reaves says. "You're less likely to see a full-on, militia-style arming of groups."

But both Meidl and Reaves are seeing evidence that more left-wing groups may be picking up firearms, claiming that it's necessary to defend themselves from extremist right-wingers.

On Aug. 29, Portland antifa activist Michael Reinoehl shot and killed Aaron Danielson, a former Spokane resident who supported the far-right Patriot Prayer group. Before he was killed by a U.S. Marshals task force, Reinoehl told Vice News that his actions were in self-defense and that the "shot felt like a beginning of a war." 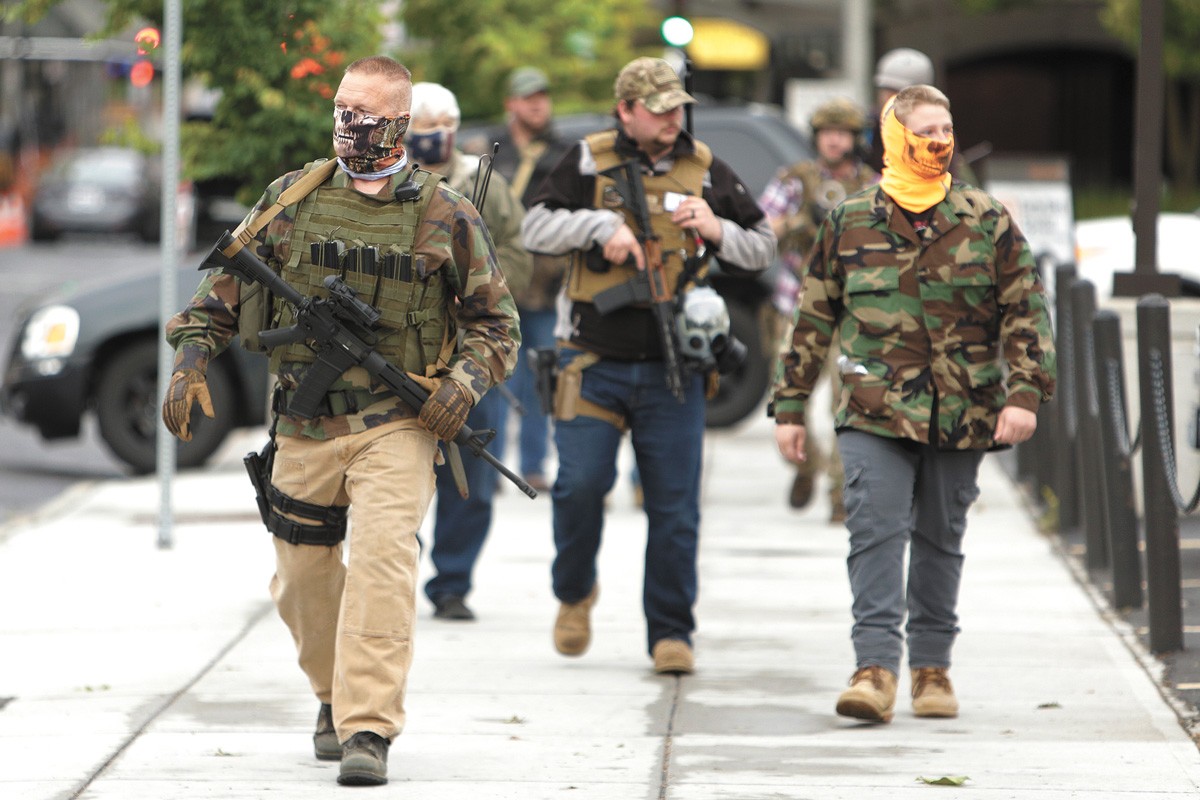 DOUSING THE TINDERBOX
With the election as another potential flashpoint, law enforcement has had to consider ways to prevent violence between opposing sides.

"You have to keep them away from each other," Reaves says. "It's the only way you can set up a peaceful protest."

But to do that effectively, she says, law enforcement has to be seen as a neutral party. And right now? There's a lot of distrust and anger about law enforcement. The national protest footage doesn't just show protester violence — it shows a lot of brutality from police officers.

"The perception is that they favor one side," Reaves says. "They are people who believe that they are acting in some sympathetic ways to right-wing protesters."

Meidl says that lack of trust from some in the community in this environment has been frustrating — even hurtful — and has made their job harder.

"It does add a layer of complexity when you are now looked at as a political arm instead of a neutral peacekeeper," Meidl says.

Spokane hasn't had any big outbreaks in protest violence — from the left or the right — since that first protest this year. Meidl says the Police Department shifted its strategies. Recognizing that the presence of the police themselves could antagonize the crowd in this environment, they reduced the number of visible officers. Instead of a big show of force, they kept a lot of the officers in reserve, ready to respond if needed.

But he also heaps most of the credit on the protesters themselves. They've policed each other, he says, with the crowd shutting down any agitators instead of cheering them on.

The more activists that condemn violence, he argues, the better. And when it comes to right-wing counterprotesters — or any protesters — carrying guns to the event, Meidl offers an explicit plea: Don't.

"You have emotion. You have different ideologies. You have intolerance," he says. "You have compressed, dense areas with all of these people rubbing shoulders against each other. There's just no purpose in bringing the guns down there."

Meanwhile, Reaves has a counterintuitive message: Don't try to whip up fear. Law enforcement should keep tracking threats, she says, but the general public shouldn't panic.

"People need to tone it down," Reaves says. "That's my takeaway from all this, is everybody take it down a notch."

Rittenhouse killed two men in Wisconsin, having traveled there, he claimed, to protect businesses from destruction by the left. Reinoehl killed a man in Portland, he claimed, because he believed he was defending a friend from violence on the right.

Fearing the worst, Reaves warns, can sometimes bring it about.

"People are waiting for some massive conflagration and fighting in the streets," Reaves says. "The more the expectation is set that that's going to happen, the greatest the chances are of that happening." ♦