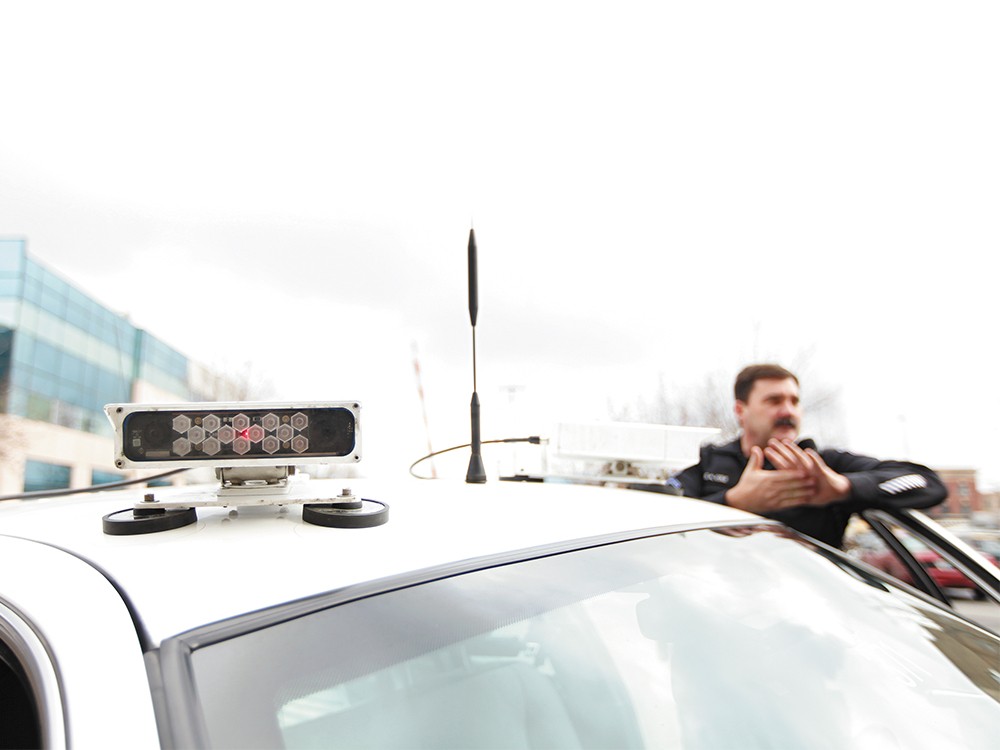 Young Kwak
Spokane Police Officer Dan Cole has driven one of the department\'s two license-plate-scanner-equipped vehicles for about a year.

With recent advances in camera technology, law enforcement agencies have increasingly embraced the use of video for fighting crime. Spokane Police investigators already use portable surveillance cameras as well as automatic license plate readers. They plan to issue officers body and dashboard cameras to record on-duty interactions by the end of the year.

The American Civil Liberties Union of Washington considers these new surveillance efforts a significant threat to personal privacy. Legislators on both sides of the aisle have also expressed some concern, wary of the omnipresent eye of a Big Brother state.

Walker emphasizes the downtown camera plan would not include an officer regularly watching the video feeds. Investigators would typically review the recorded footage only after a crime had been committed.

While police officials have not settled on any particular camera model, Walker says they would like to pursue high-definition color cameras with the capability to rotate and zoom. They would also need to figure out a wiring network, servers and other support equipment.

“We’re definitely still in the research phase and looking at the locations and the costs,” he says.

Spokane has struggled with previous issues over the use of surveillance cameras or law enforcement video recording. In 2007, a security guard at the downtown Thomas S. Foley U.S. Courthouse was charged with felony voyeurism after reportedly using courthouse cameras to look in nearby windows and record women undressing. In 2008, the Spokane Police Department suffered public criticism over its handling of video recordings from a July 4, 2007, protest at Riverfront Park.

Police officials expect area businesses to support the new proposal. Mark Richard, president of the Downtown Spokane Partnership, says many businesses already have their own cameras, so they would not oppose additional cameras as long as policies were in place to prevent misuse.

“If it’s an additional tool to enhance law enforcement’s ability to be effective, I believe our downtown businesses would support that,” Richard says.

As part of additional efforts to adopt new police technology, the Spokane Police Department has also ramped up its use of vehicle-mounted automatic license plate readers. The readers scan vehicles as they pass patrol cars and automatically log all license plates, running the numbers against a database of stolen vehicles.

Officer Dan Cole has driven one of the department’s two reader-equipped vehicles for about a year. He says the AutoVu reader can pick up license plates across three lanes in the dark and instantaneously check them against flagged vehicles.

“It ties into a network in the computer,” he says of the reader.

Cole says the program can be used to find any stolen vehicle in the database, or officers can input specific license numbers for tracking suspects in other crimes. Crime analysts can also review all license plates logged in recent months to pinpoint vehicles in certain areas at certain times, whether they’ve been flagged or not.

Doug Honig, communications director for ACLU Washington, says privacy advocates worry that law enforcement’s broad use of technology to track and record the general public moves the country toward a “surveillance society.”

“We’re concerned by the proliferation of more camera systems,” he says. “We think that when someone’s outside, the government shouldn’t be recording [them].”

Honig also argues that research indicates public surveillance cameras do not prevent crime, but mostly just push it into other areas. He says those recorded by the cameras would primarily be law-abiding citizens.

Seattle police officials lobbied hard earlier this year to expand police access to red-light camera images, citing multiple murder cases they believe could be solved with help from nearby cameras. The department also encountered strong opposition earlier this month over attempts to introduce a drone program.

Walker argues the video technology, whether in public spaces or traffic cameras, can serve as an invaluable investigative tool. He says the department hopes to have a more concrete plan and price estimate for the camera project within a couple of months.