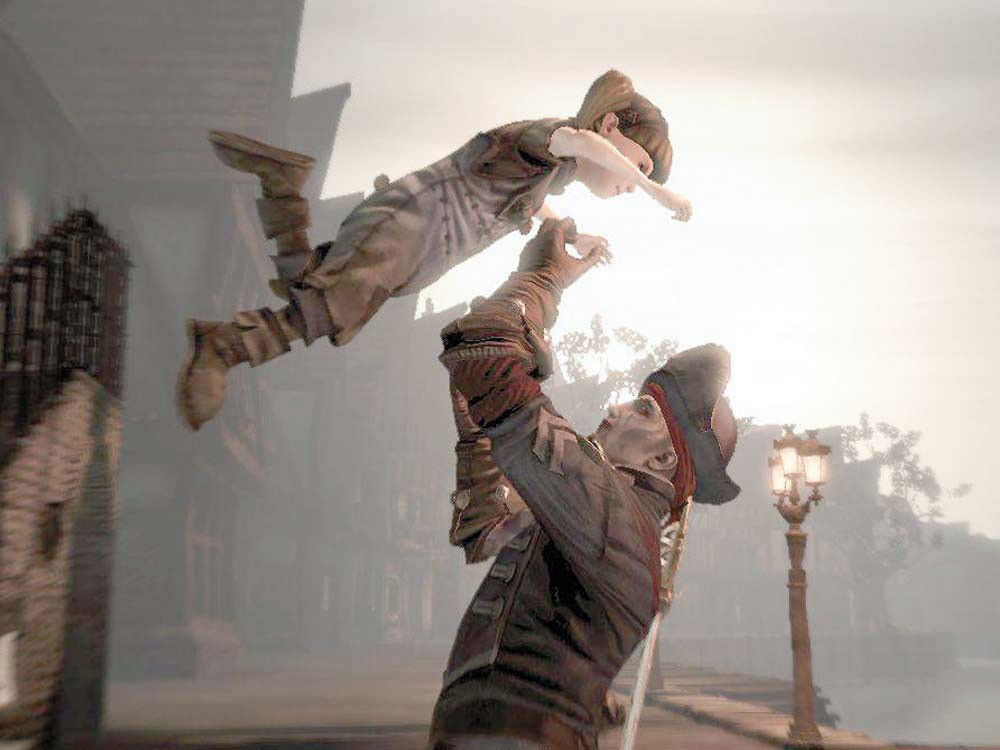 Fable III makes room for innocence as much as experience.

"Son, why are you always going around dancing and playing patty-cake with everybody? Don’t you have a kingdom to save?”

“I am saving the kingdom, Dad. But unlike when you did it back in Fable II, this time it’s a revolution — against my brother, your son, whom you made king, I might add. In order to overthrow him, I’m going to need good relationships with as many people as possible.”

“Well, the only thing I see this social networking doing is earning you points with the Heroes Guild. And what do you go and spend those points on? The ability to fart or dye your hair purple!” “Are you saying you didn’t fart back in your day? And besides, I actually have to earn experience for my weapons themselves, otherwise they won’t get any stronger. I can’t just go out and buy the biggest cleaver like you did.”

“It wasn’t so easy finding that cleaver. It took a lot of adventuring to track down. Now you just swagger into a shop and buy a gun and get on with upgrading it.”

“And where do you think the money comes from, Dad? It’s not like I got to keep your fortune. No, I learned a thing or two from you, despite what you might think. I’ve invested in a lot of real estate. See, look at this map…” “Map?” “Yeah, this magical map you left behind. It shows the whole kingdom. I can even travel from town to town just by clicking on the map.

And it shows me every house and store that I own. I can adjust the rent, evict the tenant and even order repairs for the house right from here. I’ll bet you wish you had one of these back in the day.”

“Back in the day I didn’t need to repair houses. If someone lived in a hovel, they expected a hovel. People didn’t go around demanding handouts. Your generation has gotten soft. I suppose nobody catches diseases, now, either.”

“Nope, we do. But don’t worry, I carry condoms. My husband doesn’t want me bringing anything home.”

THE GOOD: “It’s still a beautiful land, though, isn’t it, Dad? Even with all the changes since your day — I mean, the factories, the smog, the expensive homes where it used to be wilderness… They all have a crooked, off-kilter storybook charm. Even the model houses on the map have sagging roofs and overstuffed attics…”

THE BAD: “The map again! Your generation spends more time observing a mocked-up, virtual rendering of the world than you do interacting with the real thing. With your automatic flitting around and your long-distance housekeeping, it’s a wonder you use your brain at all! Clearly your enemies have stopped — I’ve seen bandits who can’t figure out that they can’t shoot through trees. But, son, I expect more from you. There’s a fine line between streamlined and dumbed-down. Don’t cross it too much.”

THE BOTTOM LINE: Beautiful, silly and a tad simplistic, Fable III is a fantasy role-playing game for adventurers who want to worry more about playing around than playing a role.

Puzzles, games, and new activities can keep your brain healthy. Plus, they're fun!

Twenty years since the launch of the bastard of all gaming consoles: the Dreamcast

The most divisive films on Rotten Tomatoes