Facebook braces itself for Trump to cast doubt on election results 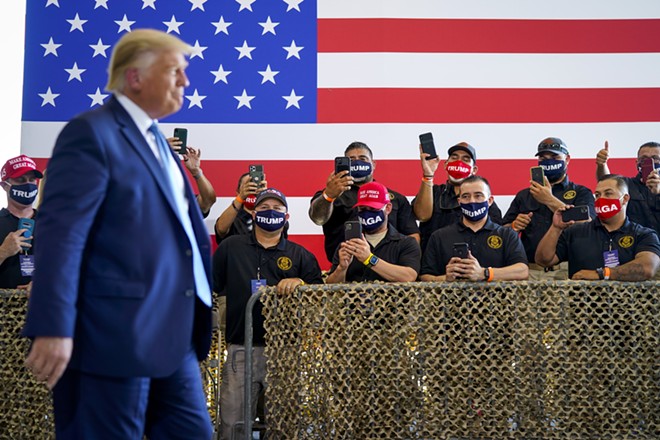 Doug Mills/The New York Times
President Donald Trump, who has questioned the legitimacy of the vote-by-mail system, arrives for a campaign rally in Yuma, Ariz., on Tuesday, Aug. 18, 2020. Facebook, the world’s biggest social network, is working out what steps to take should Trump use its platform to dispute the results of the presidential election.
By Mike Isaac and Sheera Frenkel
The New York Times Company

SAN FRANCISCO — Facebook spent years preparing to ward off any tampering on its site before November’s presidential election. Now the social network is getting ready in case President Donald Trump interferes once the vote is over.

Employees at the Silicon Valley company are laying out contingency plans and walking through postelection scenarios that include attempts by Trump or his campaign to use the platform to delegitimize the results, people with knowledge of Facebook’s plans said.

Facebook is preparing steps to take should Trump wrongly claim on the site that he won another four-year term, said the people, who spoke on the condition of anonymity. Facebook is also working through how it might act if Trump tries to invalidate the results by declaring that the Postal Service lost mail-in ballots or that other groups meddled with the vote, the people said.

Mark Zuckerberg, Facebook’s chief executive, and some of his lieutenants have started holding daily meetings about minimizing how the platform can be used to dispute the election, the people said. They have discussed a “kill switch” to shut off political advertising after Election Day since the ads, which Facebook does not police for truthfulness, could be used to spread misinformation, the people said.

YouTube and Twitter have also discussed plans for action if the postelection period becomes complicated, according to disinformation and political researchers who have advised the firms.

The tech companies have spent the past few years working to avoid a repeat of the 2016 election, when Russian operatives used Facebook, Twitter and YouTube to inflame the American electorate with divisive messages. While the firms have since clamped down on foreign meddling, they are reckoning with a surge of domestic interference, such as from the right-wing conspiracy group QAnon and Trump himself.

“We continue to plan for a range of scenarios to make sure we are prepared for the upcoming election,” he said.

Judd Deere, a White House spokesman, said, “President Trump will continue to work to ensure the security and integrity of our elections.”

Google, which owns YouTube, confirmed that it was holding conversations on postelection strategy but declined to elaborate. Jessica Herrera-Flanigan, Twitter’s vice president of public policy, said the company was evolving its policies to “better identify, understand and mitigate threats to the public conversation, both before or after an election.”