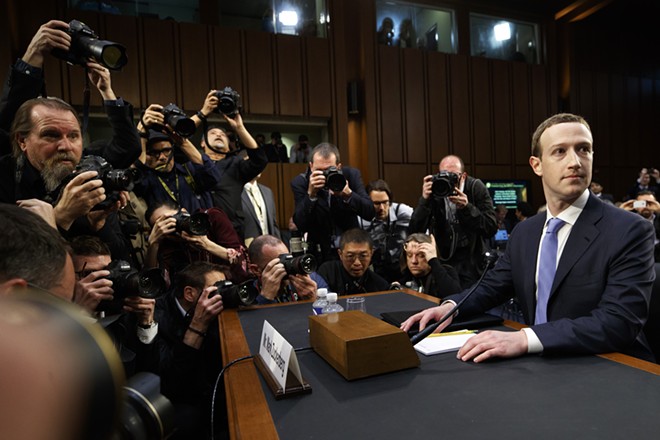 Tom Brenner/The New York Times
Mark Zuckerberg, the chief executive of Facebook, arrives to testify at a joint Senate Judiciary and Commerce Committee hearing, on Capitol Hill in Washington, April 10, 2018. Facebook said on April 24, 2019, that it expected to be fined up to $5 billion by the Federal Trade Commission for privacy violations, in what would amount to a record penalty for a technology company by the agency. The social network disclosed the amount in its quarterly financial results, saying it estimated a one-time loss of $3 billion to $5 billion in connection with an “ongoing inquiry” with the FTC Facebook added that “the matter remains unresolved.”

SAN FRANCISCO — Facebook said Wednesday that it expected to be fined up to $5 billion by the Federal Trade Commission for privacy violations. The penalty would be a record by the agency against a technology company and a sign that the United States was willing to punish big tech companies.

The social network disclosed the amount in its quarterly financial results, saying it estimated a one-time charge of $3 billion to $5 billion in connection with an “ongoing inquiry” by the commission. Facebook added that “the matter remains unresolved, and there can be no assurance as to the timing or the terms of any final outcome.”

Facebook has been in negotiations with the regulator for months over a financial penalty for claims that the company violated a 2011 privacy consent decree. That year, the social network promised a series of measures to protect its users’ privacy after an investigation found that its handling of data had harmed consumers.

The FTC opened a new investigation last year after Facebook came under fire again. This time, the company was accused of not protecting its users’ data from being harvested without their consent by Cambridge Analytica, a British political consulting firm that was building voter profiles for the Trump campaign. Facebook also suffered a data breach that exposed the personal information of nearly 50 million users.

Levying a sizable fine on Facebook would be a milestone for the FTC, whose biggest fine for a tech company was $22 million against Google in 2012 for misrepresenting how it used some online tracking tools. The agency is riding a wave of anti-tech sentiment as questions about how tech companies have contributed to misinformation, election meddling and data privacy problems have stacked up.

“The FTC is really limited in what they can actually do in enforcing a consent decree, but in the case of Facebook, they had public pressure on their side,” said Justin Brookman, a former official for the regulator who is now a director of privacy at Consumers Union.

But some lawmakers said a fine would not suffice in punishing Facebook. Rep. David Cicilline, D-R.I., said that “a fine in the low billions of dollars would amount to a slap on the wrist for Facebook” and that Congress needed to act.