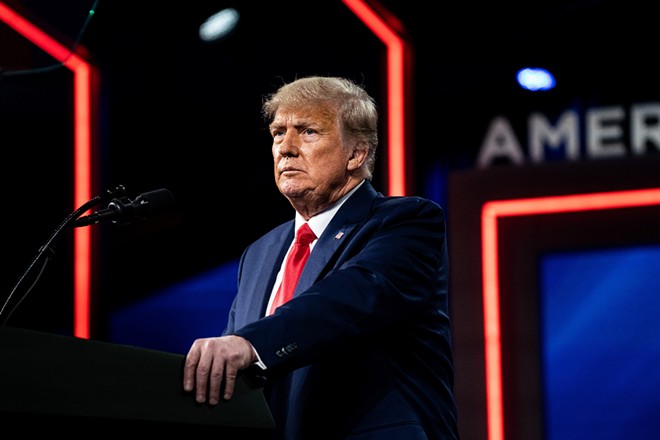 Erin Schaff/The New York Times
Former President Donald Trump speaks at the Conservative Political Action Conference in Orlando, Fla. on Feb. 28, 2021. Facebook’s Oversight Board, an independent and international panel that was created and funded by the social network, plans to announce on Wednesday, May 5, 2021, whether former President Donald Trump will be able to return to the platform that has been a critical megaphone for him and his tens of millions of followers.

SAN FRANCISCO — A Facebook-appointed panel of journalists, activists and lawyers on Wednesday upheld the social network’s ban of former President Donald Trump, ending any immediate return by Trump to mainstream social media and renewing a debate about tech power over online speech.

Facebook’s Oversight Board, which acts as a quasi-court over the company’s content decisions, ruled the social network was right to bar Trump after the insurrection in Washington in January, saying he “created an environment where a serious risk of violence was possible.” The panel said that ongoing risk “justified” the move.

But the board also said that an indefinite suspension was “not appropriate,” and that the company should apply a “defined penalty.” The board gave Facebook six months to make its final decision on Trump’s account status.

“Our sole job is to hold this extremely powerful organization, Facebook, to be held accountable,” Michael McConnell, co-chair of the Oversight Board, said on a call with reporters. The ban on Trump “did not meet these standards,” he said.

The decision adds difficulties to Trump rejoining mainstream social media, a key source of his clout that he used during his White House years to directly cajole his tens of millions of followers, exploit their grievances, set policy and criticize opponents. Twitter and YouTube had also cut off Trump in January after the insurrection at the Capitol building, saying the risk and potential for violence that he created were too great.

But while Trump’s Facebook account remains suspended for now, he may be able to return to the social network once the company reviews its action.

In a statement, Trump did not directly address the board’s ruling. But he slammed Facebook, Google and Twitter — some of which have been major fundraising platforms for him — and called them corrupt. “Free Speech has been taken away from the President of the United States because the Radical Left Lunatics are afraid of the truth,” he said.

Trump’s continued Facebook suspension gave Republicans, who have accused social media companies of suppressing conservative voices, new fuel against the platforms. Mark Zuckerberg, Facebook’s chief executive, has testified in Congress several times in recent years about whether the social network has shown bias against conservative political views. He has denied it.

In a statement, Facebook said it was “pleased” that the board recognized that its barring of Trump in January was justified. The company added that it would consider the ruling and “determine an action that is clear and proportionate.”