Pullman Police Sgt. Dan Hargraves resigned from his position on Nov. 26, roughly one month after he was charged with felony sexual misconduct for allegedly assaulting a Washington State University student.

Hargraves, 49, was arrested and charged on Oct. 30 following an investigation conducted by the Washington State Patrol into a report from an 18-year-old female WSU student who alleged that the officer picked her up for being intoxicated outside of her dorm — with a stated intent of taking her to the police station — before stopping his patrol car, telling her to get out of the vehicle and onto her knees, and unzipping his pants. The student alleged that she then gave Hargraves oral sex. (The WSP investigation found Hargraves semen on the woman's sleeve.) 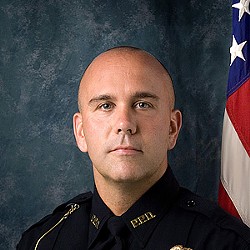 Hargraves resignation came the day before he was scheduled to be interviewed as part of the internal investigation, according to a press release from the Pullman Police Department. The investigation — which was completed after Hargraves' resignation — concluded that the 19-year veteran of the department violated internal policies, including involvement in criminal conduct, failure to activate his body-worn camera, and improper treatment of persons in custody. (Hargraves was also investigated in 2016 for propositioning a fellow employee, which resulted in mandatory counseling.)

Gary Jenkins, chief of the Pullman Police Department, will also be submitting a notice to the Washington State Criminal Justice Training Commission that Hargraves left the department due to "disqualifying conduct," per the release. The notice will also initiate a process to decertify Hargraves as a police officer in Washington state, and his decertification will be entered into a national database that other law enforcement agencies across the country can access.

Pullman Police Cmdr. Chris Tennant conducted the internal investigation and tells the Inlander that the department was waiting for the outcome of his review before making any decision regarding discipline or terminating his employment.

Tennant wouldn't say what consequences he recommended to Chief Jenkins, who has ultimate authority on personnel matters.