City councilman Mike Fagan has unconventional views on vaccinations. So, what else does he think? 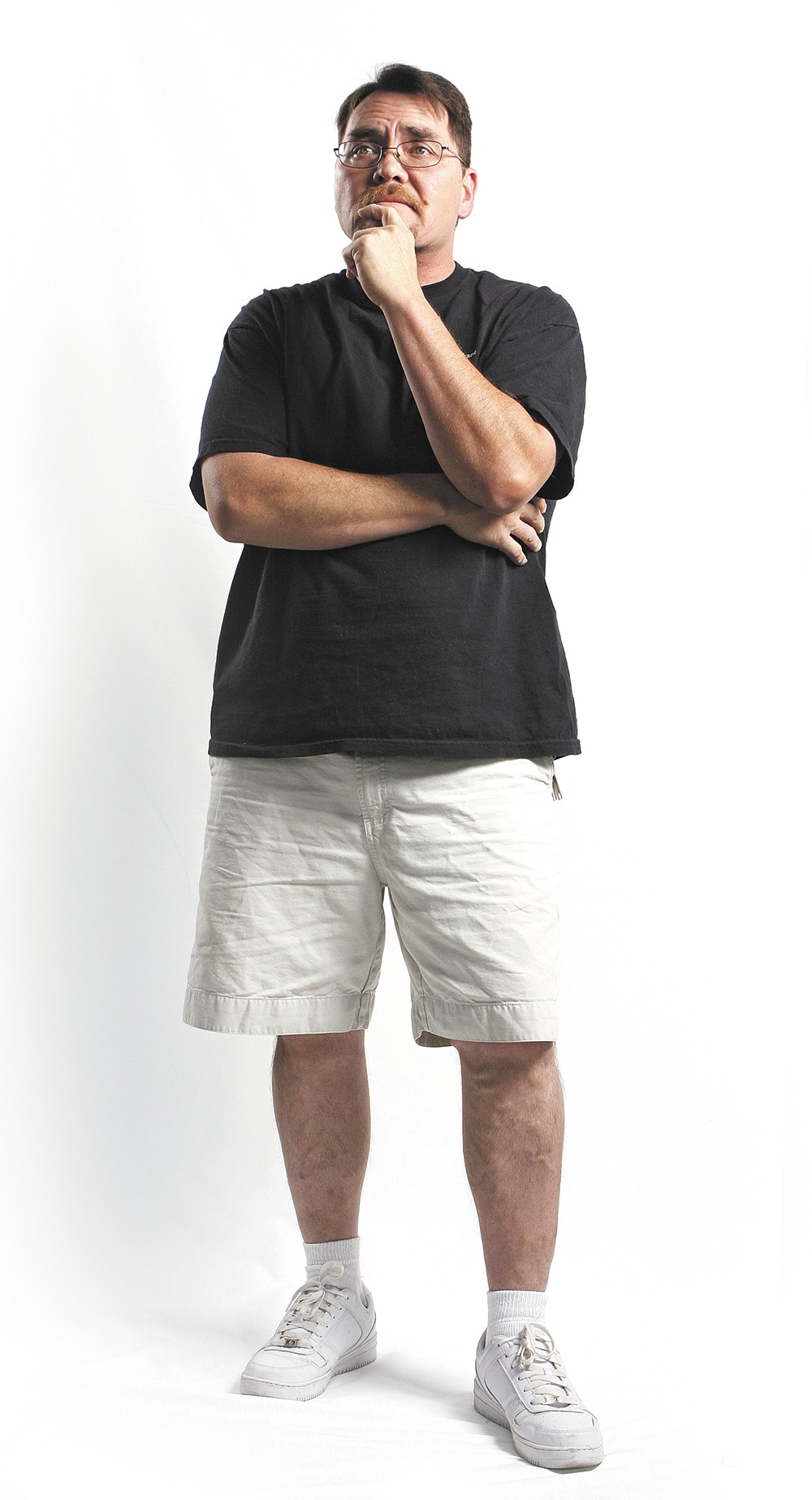 Councilman Fagan: "To me, politics and religion are one in the same."

City council study sessions are usually as dry as they sound.

But last week, the small conference room where they are held was electric. A guard stood outside of the packed room where Spokane Councilman Mike Fagan sat with a grimaced expression as his colleagues discussed forcibly removing him from the board overseeing the Spokane Regional Health District.

At issue was a Facebook post Fagan had written earlier this month that expressed skepticism about vaccines, followed by more posts suggesting that some vaccinations caused autism, a claim that has been widely debunked. The post came days after the health district, reacting to a measles outbreak in Southern California, called on everyone to get vaccinated against the disease.

"It does make it more challenging when a board member contradicts the science of public health," Dr. Joel McCullough, chief medical officer for the Spokane Regional Health District, says about Fagan's remarks.

Although council held off on removing him from the board, the episode has further strained relations between the other councilmembers and Fagan, who called Council President Ben Stuckart a "coward" at the end of last week's meeting.

With Fagan's views on vaccines the cause of so much consternation, the Inlander sat down with the conservative councilman and radio host to hear what he thought about fluoride, religion and the birthplace of Barack Obama, among other topics. His remarks have been lightly edited for space and clarity.

INLANDER: Just to clarify your position, should people get vaccinated?

FAGAN: That is a personal choice. I personally don't do vaccinations, but I won't prevent anyone else from participating. I would just hope that they would do their due diligence to ensure that whatever they are putting in their body or their children's body, they're fine with it.

Can the recent measles outbreak be blamed on immigrants to some degree [as you've asserted]?

We can't say for sure at this point because the investigation is not over with yet, but what we can say [is] that, according to the [Centers For Disease Control and Prevention], travelers do bring the measles and other diseases into the country. Well, travelers could also be illegal aliens.

Now I did make a statement out there in the study hall room to the effect of, 'Wasn't that Liberian an illegal alien that ended up dying from Ebola down in Dallas and didn't he come from a community of 10,000 more illegal Liberians?' Yes, he did. That's what the mainstream media reported.

Let's talk about that: What news outlets do you regularly read?

I'll tell you I've got a numerous amount of news feeds, both mainstream as well as what I call 'underground.' These are patriot sites, freedom-minded sights, health sites, children's medical advocacy.

What do you think about WorldNetDaily [a hard-right website that traffics in conspiracy theories]?

I have seen some WorldNetDaily, and I know it's a little bit weird. Another one that I do read from time to time that has been identified as weird is the Health Ranger, run by Mike Adams. I had Mike Adams on my [radio] show in the past. I'm always one to extend the benefit of the doubt to someone until they prove himself wrong.

With WND, one of the things they are best known for is questioning whether or not Barack Obama was born in the U.S. What do you think about that?

I don't have time to think about that. Was he born here or not? Whoopee. Was there election fraud in 2012? Well, you know there's some indication that there was, but whoopee. ... If I was to give you a little bit of meter of whether I believe it, I would have to say, yeah, there might be a little bit of truth to it.

I haven't studied the issue, really. I have been exposed to media coverage that has led me to believe that overexposure of fluoride in children's teeth would cause discoloration and pitting, but what the long-term health effects are I don't know because I haven't sat down and dove in.

For the record, you are skeptical that climate change is happening.

Yeah, I am, and the reason being is because of all the fraud that has risen to the surface. Until the scientific community comes together on global warming, I'm sorry, I can't buy it.

What are your religious beliefs?

I guess you could call it born-again Christian. I was born again almost two years ago. ... I'm not perfect, and I'm not afraid to admit it. But I'll tell you something, my colleagues sure are. [laughs]

Can someone be a good Christian and be a good liberal at a the same time?

[Sighs.] I guess that would all depend on one's world view. I am aware that you have this Unitarian Church, and I am aware that we have women pastors, women reverends and things to that effect, and, again, I'm not perfect, and I haven't read the whole Bible, but it's my understanding that it's not the place of women being in those positions. Those places are normally reserved for men. Fine, whatever, if that's what you want to do, that's your prerogative, and I respect that.

Stance of gays, lesbians, transgender. Yes, I love people too. I love the person, but I denounce the act and the lifestyle.

With regard to the sanctity of life, you know, I made the proclamation on the dais [when city council was considering an ordinance making it illegal to block driveways in response to protests at Planned Parenthood], it wasn't about driveways, which is a bunch of BS, council president, it was about squelching the voice of abortion foes. It was about pandering to Planned Parenthood, who, mind you, contributed to Councilwoman Candace Mumm's campaign. The day before the meeting she came to me and sat in my cubicle and said, 'Mike, I am a serious Christian.' Give me a break. [laughs]

Do your religious beliefs inform your political beliefs?

To me, politics and religions are one in the same, and the reason they are is because I believe we are a nation that is based on Judeo-Christian principles.

Should creationism be taught in schools?

I think it should be optional. I mean if you are going to offer children an opportunity to learn one thing, then I think you need to open the door to learn another thing.

Look, under the federalization of our education establishment and for the sake of equal rights, we are now teaching more homosexual activity and lesbian activity and transgender activity then we are about traditional marriage. We are putting more emphasis on Islam and being a global citizen. Well, what happened to our sovereignty as American citizens?

Do people choose to be poor?

I think there are some lifestyle choices that people end up making and that lands them in this predicament they are in. But I am open-minded that there are some situations where poverty can't be fled. ... But when you compare our poor to other countries' poor, our poor are really rich.

That's a good question. The reason that is out there and is planted in a lot of people's minds is because it was an attack by extremist Muslims. ... I know that there are some fringe allegations that are out there with regards to it being an inside job perpetrated by the Bush administration.

Have I formulated a final opinion? No. Is it important to me? No, probably not.

What do you think about the U.N.'s Agenda 21 [a sustainability initiative that Tea Party activists claim is a covert attempt to undermine property rights]?

Yes, as a matter of fact, I believe Agenda 21 is real. ... A lot of what we do in government is laced with and interlaced with Agenda 21 principles.

Was the moon landing real?

What do you think about Matt Shea [a controversial Spokane Valley state representative who believes, among other things, that people should stockpile weapons and ammunition in anticipation of the collapse of the economy]?

Did humans live alongside dinosaurs?

Who cares? Next question.

No, I didn't. I would like to say this: I feel like what I posted did not really advocate one way or another.

This isn't about me. It's about the people in that room. The council president railroaded those people, showed his true colors, and he has to pay for that.

The difference between me and the majority is this: They put themselves up on a pedestal and they look down on the people. I don't. I'm a servant of the people. ♦