Faithful to the Music 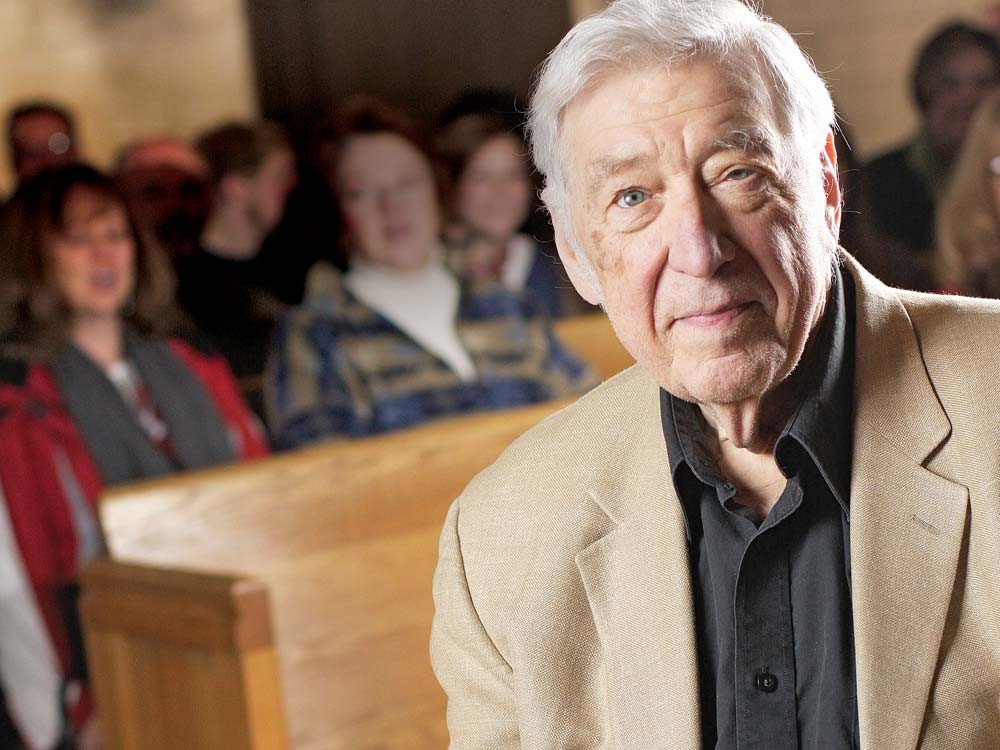 Beneath the hundred-foot stone arches of the cathedral’s interior, the group of singers look small. Still wearing coats against the drafty cold, many of them have pencils behind their ears so they can jot notes on their musical scores. Their leader, a gray-haired man seated behind a lectern, fine-tunes their singing as they rehearse a Bach cantata: “Is that clear? Two measures and then the quick diminuendo. OK, let’s try that again.”

Two dozen voices surge in unison until the conductor waves them off, needing to work out a loud-soft-loud transition. “There’s a little ritard going into 14,” he says, “and then mezzo-forte. It’s talking about peace and calm and well-being.”

The choir practices another passage with a sudden volume increase and then the sopranos enter, very softly.

Softer not louder, subtle not flashy: just the way Gunther Schuller wants it.

During more than eight decades in both classical music and jazz — as performer, conductor, composer and scholar — Schuller has earned a slew of honorary degrees, a Pulitzer, a couple of Grammys. Some of his accolades are so exalted, it sounds like somebody made them up: “Hall of Famer.” “Genius.” “Living Legend.”

But that’s exactly what he has been called by the nation’s museum of classical music, the MacArthur Foundation and the Library of Congress.

This Saturday night, during the intermission of a Northwest Bach Festival concert that he’s conducting, Schuller is going to receive a civic-appreciation award. Given everything else he has earned, though, how does such an award stack up?

Schuller goes through the usual blather about how fine Spokane’s cultural opportunities are “for a city of this size” — but then he presses the point. In the Pacific Northwest, he claims, “There’s something that’s been lost in the East — independence, valuing democracy, interest in the arts. There’s a resilience here — the East Coast has become jaded and snobbish.” Recognition from the city where he has led a Bach festival for 19 years is something that matters to him.

Schuller´s service to this region’s music goes well beyond just the Bach Festival. For one thing, back in the mid-‘80s, he rescued the Spokane Symphony Orchestra. As Verne Windham — now KPBX music director and director of the Spokane Youth Symphony, then a horn player in the SSO — tells it, “Gunther walked in as a guest conductor at a moment when the Symphony was in crisis. He told management to start treating [the musicians] better.”

And as for the musicians, Windham says, “Gunther was fabulous. He laid all these guilt trips on us,” trying to improve the music and “believing in the orchestra when the orchestra didn’t have as much self-respect as it needed to have.” Schuller even took an SSO recording “and shopped it around back east,” Windham says, “just to show them what these people in Spokane could do.”

While relaxing after rehearsal in the lobby of the Davenport Hotel, Schuller recalls playing under Arturo Toscanini, Fritz Reiner and all those scratchyvinyl conductors of the ‘40s. He would go on to write the book (literally) on how to conduct. But even now, after a lifetime spent performing and conducting, analyzing and championing the music he loves, he knows that he labors in a marginalized art form.

He’s on his second drink, with the vodka, the tonic and the ice served in three separate glasses, just so. His mind wanders back to the award he’ll receive this weekend — and with his one good eye peering out, watery with emotion — he says, “When someone, anywhere, organizes an award like this, it has deep meaning for me,” he says. “It’s very touching. I’m moved by that.”

This shambling old man in sandals, carrying a satchel through the hotel lobby, his overcoat trailing on the floor behind him ... at 85, he’s nearly one-third as old as the latest works of the Baroque tradition that he reveres and perpetuates.

In the middle of a glittery weekend crowd, he’s not prominent. But he carries entire musical traditions on his shoulders, and he has brought great heaping servings of that music to Spokane. For that, a city can afford to be grateful.

Earlier, toward the end of rehearsal at the cathedral, Schuller’s choir was down to just a dozen singers for “The Denial of St. Peter,” a 17th-century work by Marc-Antoine Charpentier. He points out a diminuendo here, all the tempo changes over there, marveling at the music’s complexity and encouraging his singers (“do your best on that high A”). Then he smiles as a cadence comes to a close — a subtle ending that reverberates around the cathedral’s stone walls.

“You heard all the dissonances in that?” he asks.

And then, just before several singers surround him, asking questions and welcoming him back, he says, very quietly, “That’s most beautiful music. Thank you very much.”