Red Dawn is supposed to happen in Spokane, which is apparently a great place to fight communism 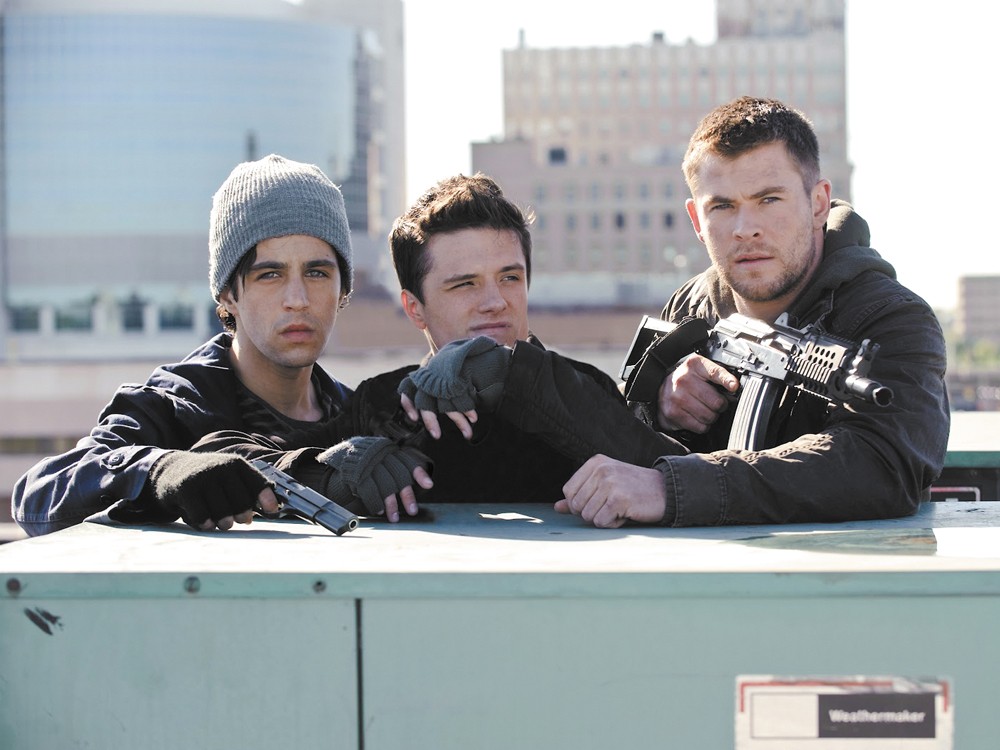 But the film was shot in and around Detroit, which was supposed to look like Spokane because in the minds of film producers, Spokane is the most average mid-sized city ever and the details don’t matter. Here’s how I assume this happened.

Producer 1: Sure, whatever. Let’s do Spokane. That’s right next to Seattle, right?

Producer 2: Yeah I think so, but we can shoot it in Michigan. They have great tax breaks.

Producer 2: I dunno. Probably. I heard it’s kind of a shithole, so immediately, I was like, ‘Bam! Detroit! Perfect!’

Producer 2: No one’s ever been to Spokane.

Producer 1: What about the people who actually live in Spokane?

Should we, as real, living proof that people actually live in the actual Spokane, care about this cinematic affront to our city? Probably not. After all, we only see the word “Spokane” about four times and the name of the city is uttered less than that. Spokane, its people, culture or even Gonzaga basketball play no part in this film. If they started calling the city “Topeka” halfway through, most viewers wouldn’t notice because the faux location isn’t even close to the most confusing element of the film.

If you don’t know, the 1984 original starred Patrick Swayze and Charlie Sheen as Colorado teens who fight off invading Soviets with their guns, hard work and ability to yell “Wolverines!” with extreme frequency. This time around, we have Chris Hemsworth (he’s Thor), Josh Peck (he used to be a fat kid on a Nickelodeon show) and Josh Hutcherson (he’s Peeta from The Hunger Games) finding their hometown invaded by those pesky North Koreans.

Why? Well, according to a mish-mash of real and fake news clips that kick off the movie, the world’s economy is all messed up or something, and there are, like, wars and stuff happening all over. The North Koreans have come to take over the U.S. and have done so with some magic weapon that wiped out all of the country’s electricity and turned its citizens into pussies. Why North Koreans? Well, the movie — which was shot in 2009, its release then continually delayed — was supposed to feature China as the bad guy (makes sense, right?), but then the studio realized that Chinese people pay to see movies and hate being made to look like bad guys. So, they just digitally changed some flags, shrugged and figured it would work.

From there, we see our lovable gang of teens, led by their Marine big brother (Hemsworth), start blowing stuff up and shooting Chinese North Korean soldiers and calling themselves “Wolverines.” The explosions are top notch, and if you’re a sucker for a good physics-defying car chase, there’s plenty for you here.

The story, though, never makes a great deal of sense and you’re left constantly wondering how in the hell the most powerful military in the world could be overrun by North Korea. The original relied on Cold War fear mongering for its backbone. This time around, however, that doesn’t quite work, and the filmmakers aren’t exactly sure about what we’re supposed to be afraid of.

But what we do know is that this is supposed to all happen in Spokane.