Highlights from the fall season in the Inland Northwest 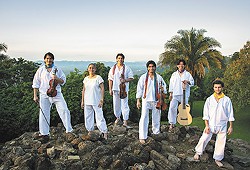 If you can't jet yourself around the globe to sample of all the wonderful culture the world has to offer (sorry to disappoint you, but you probably can't), perhaps you could settle for the offerings of Washington State University's annual Humanitas Festival. The five-day celebration provides a one-stop-shopping experience of those curious about the arts, culture and music of foreign countries. There's the fiery Mexican folk act the Villalobos Brothers, revered Indian dancer Roja Kannan, Spokane-based but Hungarian-born visual artists and lecturer Ildikó Kalapács and many other presenters at different venues around campus. See performingarts.wsu.edu/humanitas for a schedule of events and ticket pricing. (MIKE BOOKEY)

After defying expectations during its first year run, the Chinese Lantern Festival at Riverfront Park is returning this fall, offering all new displays for visitors from near and far to enjoy. The colorful cultural showcase again fills the park with handmade, fabric-covered Chinese lanterns gathered together in more than 30 grouped displays. The massive, 196-foot-long dragon is the only sculpture to be making a reappearance, and will be joined by cute animals galore and other ornate displays that represent scenes and icons of Chinese cultural significance. The centerpiece of 2016's version is undoubtedly the "Temple of Porcelain," a massive, illuminated structure covered in hundreds of thousands of pieces of actual flatware — the iconic blue-and-white ceramics China is known for. Building on successful elements of last year's festival, there will be more acrobatic performances offered nightly inside the festival. The Chinese vendor fair returns, too, adding a kid-friendly, dinosaur-fossil dig activity. Ticket prices have decreased slightly for those hoping to attend year two, which is looking to be just as spectacular and magical as Spokane's inaugural festival last fall. For more details, visit spokanelanternfestival.com. Riverfront Park, $15/adults; $10/kids under 16; $40/family pass (2 adult, 2 youth); $60/festival pass, Sun-Thu, 5-10 pm and Fri-Sat, 5-11 pm (CHEY SCOTT)

Mummies, hieroglyphics and ancient artifacts fill the gallery halls of the MAC this fall for a blockbuster touring exhibit about all things ancient Egypt. Filled with authentic items recovered by archaeologists, the highlight of Lost Egypt is a real human mummy; a teenage girl whom researchers dubbed "Annie," whose mummified body was found floating in the Nile. Along with this centerpiece, Lost Egypt features animal mummies and a recreated hallway of an Egyptian tomb, covered in art and hieroglyphics. While the exhibit's fascinating inclusions are sure to delight visitors of all ages, Lost Egypt's focus is aligned with educating viewers on the crucial role of modern archaeologists to gather and preserve knowledge of the past, versus hoarding lost treasures and priceless artifacts. Activities and interactive components of the exhibit also convey this message. Northwest Museum of Arts and Culture, $5-$10/admission; Tue-Sun, 10 am-5 pm (until 8 pm on Wed; half-price admission on Tue) (CS)

September 13 marked a century since the birth of Roald Dahl, one of the most beloved children's book authors in history who wrote Charlie and the Chocolate Factory, the BFG, James and the Giant Peach and other memorable titles. In memory of the legendary man, the Spokane Public Library is hosting a series of birthday celebrations for him this fall. Each event takes place at a different branch, with residents of various neighborhoods all getting a chance to join in on the festivities over the course of roughly a month. Or, if you're a Dahl die-hard, you may just want to attend them all. Activities include spoken excerpts from the author's books as well as arts and crafts, and refreshments will be present at each event. Thu, Oct. 6, from 4-4:45 pm, South Hill branch; Fri, Oct. 7, from 4-5 pm at Shadle branch; Wed, Oct. 19, from 3:30-4:30 pm at Hillyard branch; Thu, Nov. 3, from 3:30-4:30 pm at East Side branch; Wed, Nov. 9, from 4-5 pm at Indian Trail branch; Free (ISAAC HANDELMAN)

Moses Pendleton, founder and artistic director of MOMIX, wants you to soak in optical confusion and dip into the "stream of unconsciousness." Pendleton leads his company of dancer-illusionists in using the human body to explore non-human worlds. Known internationally, MOMIX performs on stage around the world and works in film and television. You might have seen them twisting and spinning in a Hanes underwear commercial or a Target ad. In Opus Cactus, you'll be immersed in the landscape of the American Southwest. Humans will fill the stage, but they'll morph into vibrant images of slithering lizards and cactuses. It's all part of MOMIX's illusionistic style that brings the beauty of the human form together with the splendor of nature. Martin Woldson Theater at the Fox, $30-$40 adult, $20 student, 7 pm (JO MILLER)

A pair of legendary comedians invade Spokane's INB Performing Arts Center in late October for a one-of-a-kind comedic variety show. Dubbed An Evening You Will Forget For the Rest of Your Life, the event promises not to be such, featuring stand-up comedy, musical numbers (likely including some of Martin's banjo expertise), conversations and reflections from both of the stars, and even a live band opening act in the form of the bluegrass six-piece Steep Canyon Rangers. Tickets aren't cheap, but that's the price you pay to see two of comedy's most revered faces onstage together, intent on serving up a double portion of smiles. INB Performing Arts Center, $85/$99/$150/$185/$350, 7 pm (IH)

It's best to consider "John Cleese & Eric Idle: Together Again At Last... For the Very First Time" like comedy's version of a classic-rock tour. You're going to get some of their greatest hits, but the whole band isn't there and they have new material, too. As two founders of legendary British comedy crew Monty Python, both Cleese and Idle are massive figures in comedy history thanks to that troupe's run in the '70s and '80s. Both went on to success away from Python — Cleese in A Fish Called Wanda among other films, Idle as the brains behind Spamalot — and for these shows, the duo does a bit of everything that made them famous in the first place, all from the comfort of some plush chairs on stage. INB Performing Arts Center, $59.50/$79.50/$99.50, 8 pm (DN)

Refugees, poverty, bullying, child marriage. These are some of the topics presented in this original production written by Brook Bassett. Utilizing various theatrical forms, including spoken-word poetry, dancing, monologues, video projections and cheerleading, a six-girl ensemble addresses issues faced by girls in our modern world. The subjects, backed by statistics, personal experience and historical precedent, also celebrate individuality and girlhood. The Luminary Initiative Project is the group behind Girl, Awake! The Coeur d'Alene organization produces original theatrical works and organizes outreach-style projects as a way to enlighten and inspire the community. The group's performances of Girl, Awake! support the Malala Fund, which works for girls' rights to quality education across the globe. The Modern Theater, $10, 7:30 pm (JM)

He's been met with mixed reviews since taking the helm of The Daily Show from the beloved Jon Stewart, but there's no question that Trevor Noah has gotten people talking — about politics, about race, and about his own status as a talk show host. The 32-year-old South African comedian brings his brand of laughs (some at America's expense) to the Palouse when he stops by WSU's Beasley Coliseum in early November to headline the university's Dad's Weekend entertainment options. Noah's stand-up style emphasizes his charisma and penchant for storytelling, and incorporates plenty of sociopolitical commentary. WSU students, staff and faculty members get a $5 discount, but all are welcome to pay the full price for this timely comedy event that comes just four days before Election Day. Beasley Coliseum at WSU, Pullman, $54.50, 7 pm (IH) 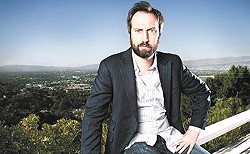 Before there was Jackass, or Nathan for You or any other television show based solely on pulling elaborate pranks on the unsuspecting public (or your parents), there was the Tom Green Show. The MTV program introduced us to a gangly, goateed Canadian who seemed to have no fear of enduring and/or causing embarrassment and endeared himself to a generation of like-minded slackers. He went on to make one of the worst movies ever screened in theaters, Freddy Got Fingered, but even that drew a cult following. He then married Drew Barrymore for a fleeting moment, survived cancer and then returned to doing stand-up comedy while also hosting an obscure late-night talk show. He's still on the stand-up circuit, and those who spent their youths laughing their immature asses off to this guy may find some nostalgia when he spends a long weekend in Spokane. Spokane Comedy Club, $17-$30, Nov. 10, 7:30 pm; Nov. 11, 7:30 and 10:30 pm; Nov. 12, 7:30 and 10:30 pm (MB) n