Highlights from this fall's special movie screenings, comedy and more

In 1982, Steven Spielberg's E.T. the Extra-Terrestrial, the gentle fable of an alien stranded on Earth and the young boy who befriends it, broke box office records (it was the highest-grossing film of all time until it was surpassed by Spielberg's own Jurassic Park) and became an instant classic (it's ranked No. 24 on the American Film Institute's list of all-time greats). It's still as funny, exciting and moving as it was when it was first released, and it's returning to theaters for its 35th anniversary to enchant a whole new generation of moviegoers. Regal Cinemas at NorthTown Mall and Riverstone Stadium, $13, 2 and 7 pm (NATHAN WEINBENDER) 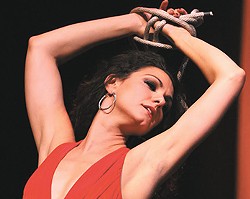 Perhaps the most well-known opera of all time, Georges Bizet's Carmen tells of a love triangle that forms between a soldier, a bullfighter and a gypsy woman. Even if you know nothing about opera, the odds are high that you'll be able to hum along to at least a couple of its iconic musical numbers, and you certainly could do much worse than making this your first live opera performance. The Opera Coeur d'Alene production, directed by Jadd Davis, will feature the Spokane Symphony, conducted by Eckart Preu. Martin Woldson Theater at the Fox, $28-$107, 8 pm (NW)

You wouldn't normally associate Mark Twain with stand-up comedy, but here's Citizen Twain, a filmed presentation of actor Val Kilmer's one-man show about American writer and humorist Mark Twain, which is being screened at the Spokane Comedy Club. It's really not so weird, though, when you consider that contemporary comedy owes quite a debt to the Huckleberry Finn author, who observed human nature with a detached wryness that's still fresh. As for Kilmer's comedy connection — well, he was really funny in Top Secret! and Real Genius, and he seriously disappears inside Twain's trademark white suit. The star will be on hand for a Q&A after the screening is over. Spokane Comedy Club, $32/$75, 7:30 pm (NW)

Not many stand-up comics can go toe-to-toe with Hollywood heavyweights like Tom Cruise and Renée Zellweger like Jay Mohr did playing a sleazy sports agent in Jerry Maguire, but Mohr has had an altogether different kind of career than most comics. He spent two years on Saturday Night Live, then wrote a best-selling book about the panic attacks he suffered while on the show. He's hosted a nationally syndicated sports-radio show and hosts a highly entertaining podcast, Mohr Stories. But he's still doing stand-up consistently — he started at age 16 — and he'll bring that experience to one show in Spokane. Spokane Comedy Club, $22, 8 pm (DAN NAILEN)

For any die-hard cineaste, one of the most encouraging trends of recent years is the uptick in silent film screenings with live musical accompaniment. After premiering an original score for 1925's The Phantom of the Opera in April, composer Dylan Champagne now debuts music to go along with the 1920 film adaptation of Dr. Jekyll and Mr. Hyde, starring John Barrymore as Robert Louis Stevenson's famous two-faced protagonist. The performance in Moscow, Idaho, will feature an eight-piece ensemble, directed by University of Idaho professor Alan Gemberling. Because a majority of silent movies have been lost to time, it's nice to know that folks are celebrating the ones we have. Kenworthy Performing Arts Centre, $10 students/$20 general, 6 pm (NW)

The Alliance for Media Arts + Culture brings a new weekly documentary series to town this fall, in partnership with the Black Lens and Magic Lantern. The first nine films in the series focus on stories about people, issues and experiences in the public health care system. Each film will be followed with a discussion and guest speakers in a session moderated by the Black Lens' Sandra Williams and Alliance Executive Director Wendy Levy, formerly a consultant with the Sundance Institute's Documentary Film Program. A film series related to health care is particularly timely given the recent launches of the UW/Gonzaga and WSU medical schools, but anyone interested in American health care should learn a lot. Magic Lantern Theater, $8 per film or $59 for series, 7 pm (DN)

If dark comedy is your thing — and I mean really dark comedy — Anthony Jeselnik is this fall's must-see comedy show. The man is incredibly funny while delivering shocking setups and utterly amoral punch lines that will make you either laugh or cringe, guaranteed. His two seasons hosting The Jeselnik Offensive, his own show on Comedy Central, were often gloriously unhinged, like when Jeselnik delivers a series of cancer jokes for an audience at a cancer support group, or tells a bunch of jokes about Muslims at an Islamic center. Don't think cancer or religion can be funny? You need to see Jeselnik do his thing. Spokane Comedy Club, $30-$40, Oct. 26 at 8 pm, Oct. 27-28 at 7:30 pm & 10:30 pm (DN)

For the second year in a row, Washington State University has reached into the ranks of excellent, politically minded comedians for its Dad's Weekend entertainment. A year after landing The Daily Show's Trevor Noah, WSU scored a coup in getting Seth Meyers. The former Saturday Night Live head writer and "Weekend Update" anchor and current host of Late Night with Seth Meyers has hit his stride as a late-night talk-show host, thanks in large part to the fount of comedy material coming out of the White House. Even better, he's found a way to convey some bipartisan moral outrage at the state of the country while keeping the laughs coming. No doubt some #MAGA dads will get bent out of shape, but it should be a great show. Beasley Auditorium, $59.50, 7:30 pm (DN) ♦