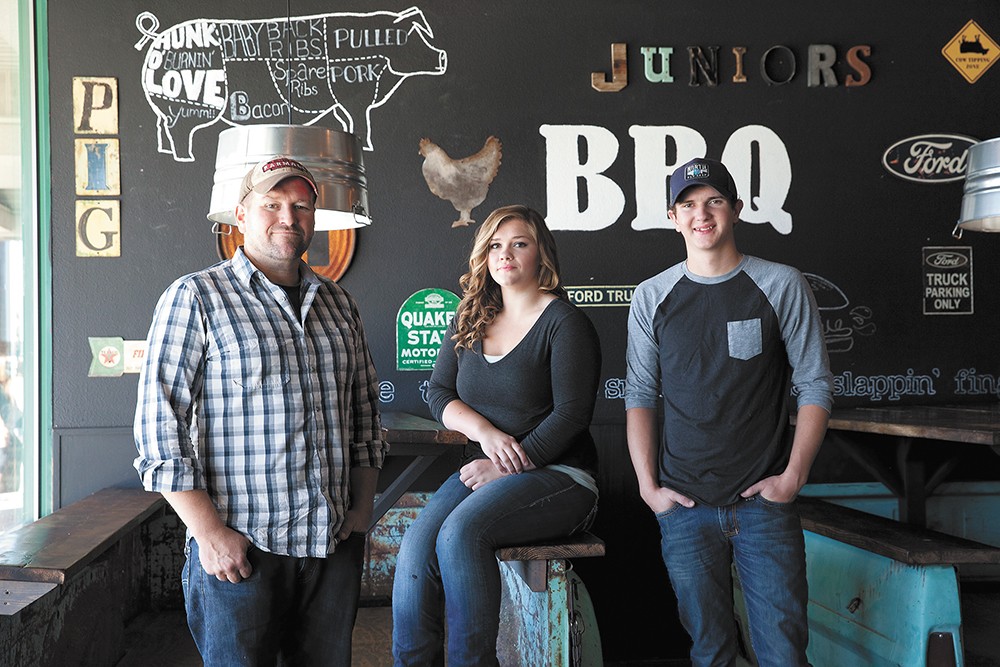 Annie Kuster
FROM LEFT: Travis, Cheyenne and Junior Potter all own and operate Coeur d'Alene-based culinary businesses, ranging from barbecue to organic sodas.

If any of the Potter children want to go into the family business,

they'll have plenty of options from which to choose, although given the example set by their elders, they're likely to open their own places.

"Every one of the kids is into farm, 4-H and food," explains Cheyenne, who counts on sisters Paisley, 16, and Ryelee, 14, to pitch in with baking and making ice cream. Everyone, she adds with a smile, helps test flavors.

For Junior, the restaurant is the culmination of a dream 11 years in the making. The family had been living in Georgia, and 8-year-old Junior helped out in the meat shop, making sausage. One day he announced that what he really wanted to do was farm and barbecue. His father's response?

"I told him, go online and figure it out," says Travis.

Junior has since honed cooking Southern-style favorites inspired by childhood memories. Inside a smoker he built from an old boiler with help from a friend at the neighboring Local Deli, Junior prepares tri-tip, brisket, pulled pork and smoked chicken. Get your choice of meat in a taco ($3), sandwich or salad ($10-$12), with one side (or fixin'), all from family recipes — his paternal grandmother's beans or his mother's mashed "taters." Specials include pork ribs on Tuesdays and fried Southern classics, like okra and hush puppies, on Friday.

When it opens next week, Cheyenne's 1920 Soda Fountain will harken back to Prohibition-era soda shops. The design is crisp, fun and fanciful, with gray walls adorned in mirrors, vintage-style lettering and black-and-white seating and tables.

"I want people to feel special," says Cheyenne of the interior.

On the menu at 1920, look for milkshakes, floats, sundaes, and egg creams — they're actually made with milk, chocolate syrup and seltzer. They make waffle cones on demand, so they're warm and crispy when filled with scratch-made ice cream using rBST-free milk. Flavors will vary: tart lime Rickey, chocolaty Tootsie Pop and a sweet-savory combo of candied orange peel and pepper.

Cheyenne likes to experiment with flavors, as does her father, who developed the idea for an organic soda company while still in the organic beef business. He'd been approached by some investors looking for his opinion on starting an organic burger chain, which Travis calculated relied on the availability of organic beverages.

The idea of producing a healthier soda stuck with Travis, who says that he'd been interested in how food impacts health ever since graduating from a Minnesota-based college program on meat and meat-cutting. He began promoting healthier options in his successive businesses, like no-nitrate bacon in the family-run meat shop and organic puddings, creamers and smoothies in his yogurt shops.

Based in Coeur d'Alene, Tractor Soda has a staple line of cola, root beer, ginger beer, cherry cream, coconut, blood orange, lemongrass, Meyer lemon and cucumber, plus specialty flavors. National distribution covers approximately 35 states, and you can try Tractor Soda locally in either of the two restaurants that extend the Potters' food industry legacy into the current generation.

With nine siblings following budding restauranteurs Junior and Cheyenne, one can only imagine what the future holds for this dynamic dining dynasty. ♦