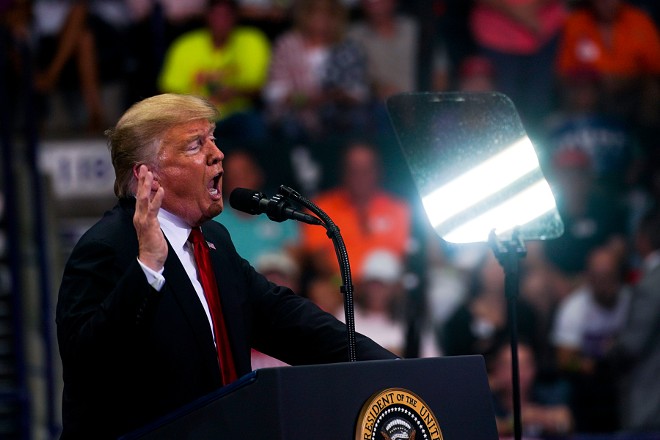 Doug Mills/The New York Times
President Donald Trump speaks during a campaign rally in Estero, Fla., Oct. 31, 2018. As President Trump and his allies have waged a fear-based campaign to drive Republican voters to the polls, far-right communities have parsed his statements, looking for hints of their influence.


On Wednesday, minutes after President Donald Trump posted an incendiary campaign ad falsely accusing Democrats of flooding the country with murderous illegal immigrants, virulent racists on an online message board erupted in celebration.


“I love it. We should be making videos like this,” one said. Another approvingly compared the ad to “With Open Gates,” a viral 2015 video about the dangers of European immigration that drew praise from prominent neo-Nazis and white nationalists, and was broadly condemned by anti-hate groups.

In recent weeks, as Trump and his allies have waged a fear-based campaign to drive Republican voters to the polls for the midterm elections Tuesday, far-right internet communities have been buoyed as their once-fringe views have been given oxygen by prominent Republicans.

These activists cheered when Trump suggested that Jewish billionaire George Soros could be secretly funding a caravan of Latin American migrants — a dog-whistle reference to an anti-Semitic conspiracy theory that has been advanced by neo-Nazis and white nationalists for years.

“Most of these conspiracies are not new to us,” said Oren Segal, director of the Anti-Defamation League’s Center on Extremism. “I’ve seen white supremacists and extremists talk about these anti-Semitic and racist ideas for years. But it was always in the corner. Now, you don’t know where the mainstream starts and the fringe ends.”

Since the 2016 election, these far-right communities have entered into a sort of imagined dialogue with the president. They create and disseminate slogans and graphics, and celebrate when they show up in Trump’s Twitter feed days or weeks later. They carefully dissect his statements, looking for hints of their influence. And when they find those clues, they take them as evidence that Trump is “/ourguy/,” a label for people internet extremists believe share their views, but who are unable to say so directly in public.

“There’s this feedback loop between Donald Trump’s Twitter feed and right-wing extremist movements,” said Sophie Bjork-James, an assistant professor of anthropology at Vanderbilt University who has studied far-right extremism. “They’re not all supportive of Trump, but his language does give them ideas that then circulate online in extremist social media spaces.”

The White House press office did not respond to multiple requests for comment.