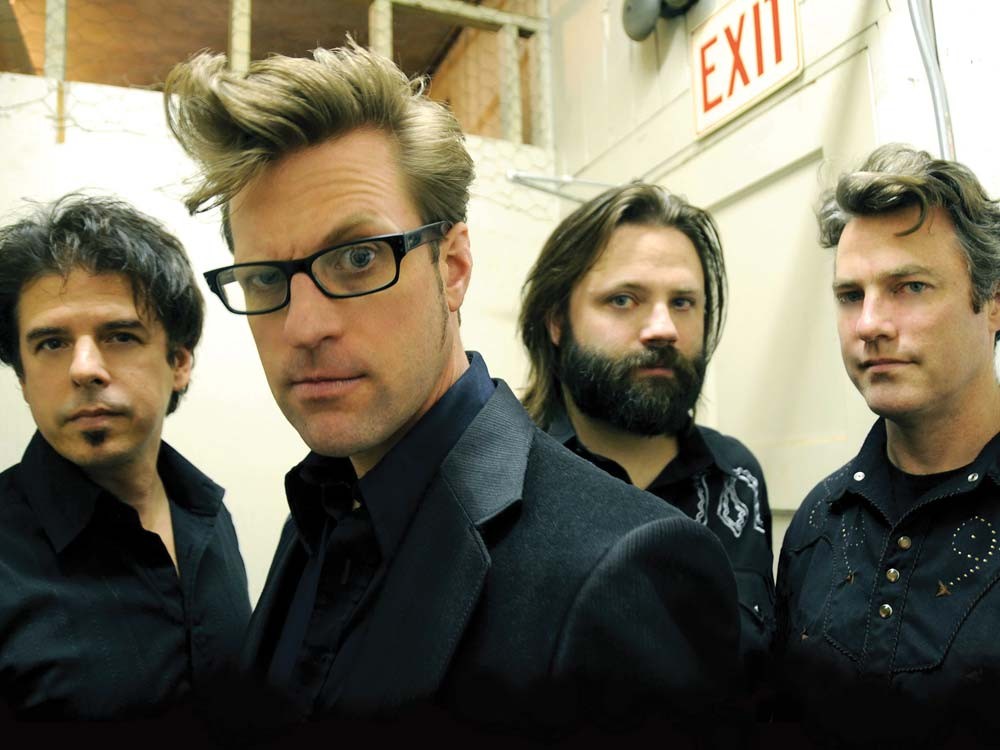 Billy Joe Huels [second from left] and the Dusty 45s.

Billy Joe Huels grew up a farm boy in Illinois with a soft spot for pompadours and honky-tonk outlaws. But he longed for the stage.

“Growing up driving a tractor,” he says, “the soundtrack was a lot of old honky-tonk music, Merle Haggard, Waylon Jennings.”

Today, as the front-man for the Seattle rockabilly group the Dusty 45s, his stance is wider and more tiptoed than Elvis himself. He gyrates as he croons Buddy Holly and Johnny Cash songs. He lights his trumpet on fire and sometimes leaps atop an upright bass.

After Huels moved to Seattle in 1989, he found himself at the center of the grunge scene.

“I definitely was influenced by the energy and the kind of raw punk ethic that was happening here,” he says. Grunge has kept its hold on Huels, too: “I’ve tried to incorporate that into the music that I love and find a way to make the trumpet valid in that sound as well,” he says.

Huels formed the 45s in 1997, and the group has since self-released four full-length albums. Their latest, Fortunate Man, plays like a well-stocked jukebox, sometimes rocking, sometimes swinging and occasionally getting slow and moody. It’s easy to lump the sound into the rockabilly category, but Huels is quick to point out that the Dusty 45s’ music isn’t nostalgic.

“I wouldn’t even say it’s a reinvention. … We’re aware of what came before us and we respect it,” he says. But Huels and his band are trying to create “a new sound.”

However you classify it, the Dusty 45s’ upbeat, trumpet-blaring tunes have gotten them the attention of legendary “Queen of Rock” Wanda Jackson and Grammy-winning, best-selling artist Adele.

“I’ve got to give it up to Jack White,” Huels says, referring to the White Stripes front-man, who produced Jackson’s record The Party Ain’t Over. “He put this raunchy trumpet all over her record.”

Looking for a horn player to reproduce that horn sound on tour, Jackson’s people got hooked up with Huels and, eventually, the rest of the Dusty 45s. On the sold-out tour, the band opens for the 73-year-old spitfire, then steps in on a few of her songs before yielding the stage to Adele, a 23-year-old soul singer from Britain. Huels laughs. He’s a long way from his old tractor days on the farm.

“There’s just been so many things that I never dreamed of, growing up on a farm, that I’ve been able to do,” he says.