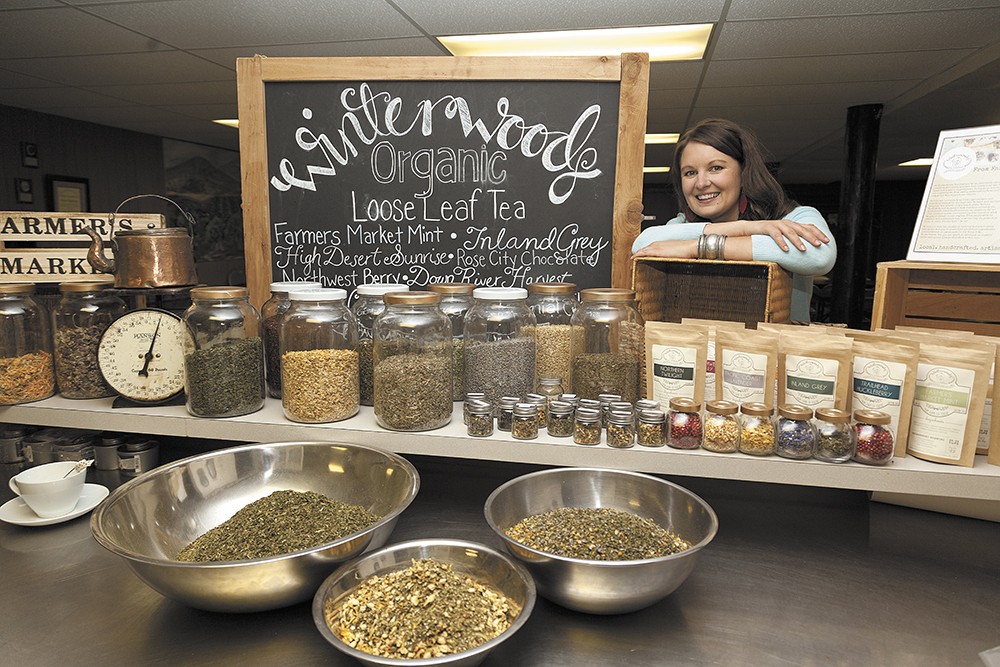 Timothy Phillips
Tirza Wibel, owner of Winterwoods Tea Company, hopes to bring an appreciation of the beverage to the region.

Insects buzzing in the distance,

trees and tall grass bending in the summer breeze, ice clinking in a perspiring glass of handcrafted mint tea — these are the sounds Tirza Wibel drinks in while relaxing on the Green Bluff Grange front porch two weeks ago, a place of shady refuge from the oppressive heat. Sitting on a hard wooden bench, the tea entrepreneur explains her philosophy regarding the beverage: it shouldn't be gulped down in a minute.

"Americans don't know how to slow down," says Wibel, who was born in Denmark but immigrated to Oregon at age 10. "Often we put tasks in front of relationships. But stopping and drinking tea can allow you to connect with those around you."

The teas she creates for her Winterwoods Tea Company, mixed at the Grange, are evidence of this ethos. Along with Farmers Market Mint, there are GreenBluff Green, Rose City Chocolate, Inland Grey — 15 varieties in all. Each vacuum-sealed packet serves about 30 cups of tea and is hand-packed with organic, fair-trade tea leaves from India, along with herbs, flowers and fruits picked from local farms, organic whenever possible. Wibel is adamant that her freshly made products are preservative-free. Yet one package, stored in a dark, dry space, will last up to a year. Each label includes steeping times and temperatures, depending on the ingredients.

Camellia sinensis, the plant that produces black, green, oolong and white teas, is mostly grown in China, India and parts of Africa. But other than that base of leaves, "It's about what can be grown right here in the Northwest," she says.

Wibel, 37, has always been a tea drinker. As a child, afternoon tea with her family mostly excited her because of the sugar cubes. But as she grew to love the flavor, she liked the way tea could be something soothing, almost healing, for those gathered around it — even without any sugar.

The idea for her business came out of her family's Tea Tuesdays tradition. Every week, her five children, now ranging from ages 3 to 13, would help make scones and homemade tea for an afternoon treat. Moving to Colville from Oregon two years ago for her husband's job, Wibel wanted a way to participate in local farmers markets. By utilizing produce from Green Bluff to make her teas, she saw a niche that hadn't yet been filled — essentially, antioxidant-rich Inland Northwest teas.

Down in the wood-paneled Grange basement, a space she rents for its certified commercial kitchen, Wibel is mixing dried organic peppermint, lavender, chamomile and rose hips into a birdbath-sized, stainless-steel bowl. The fragrant smell of Pacific Coast Lavender intoxicates the senses. She scoops the healthy mixture into an unsealed package and weighs it out evenly. She does this every two weeks, sometimes with help from friends or family, other times alone.

She says the response to her teas has been overwhelming: "It's gone from being more of a hobby to a full-time job."

At her first Idaho farmers market last summer, Wibel sold out of nearly everything, inspiring her to officially open for business in January after studiously researching industry suppliers and getting licensed in Washington. As the company has progressed — Brain Freeze Creamery has even included her tea in its ice cream — the next step is to go wholesale and build a commercial kitchen in her home. Wibel also plans to add other flavors.

There was a time she thought she'd end up in New York City as a successful career woman. She worked as a publicist for years in Seattle, but once she had kids, "My world shifted and I wanted to be with them."

With Winterwoods Tea Company, she can work and still have time for her family.

"Tea has helped me connect with this community," Wibel says. "I love being a part of a group of people committed to making this area grow." ♦

• Tea is the second most consumed beverage in the world, behind water

• All types of tea are made from the camellia sinensis plant — except for herbal teas, which technically aren't teas at all

• Approximately 85 percent of tea consumed in America is iced

• Among American millennials especially, tea consumption is on the rise — but is still well below coffee

Courtesy of the Tea Association of the U.S.A. Inc.