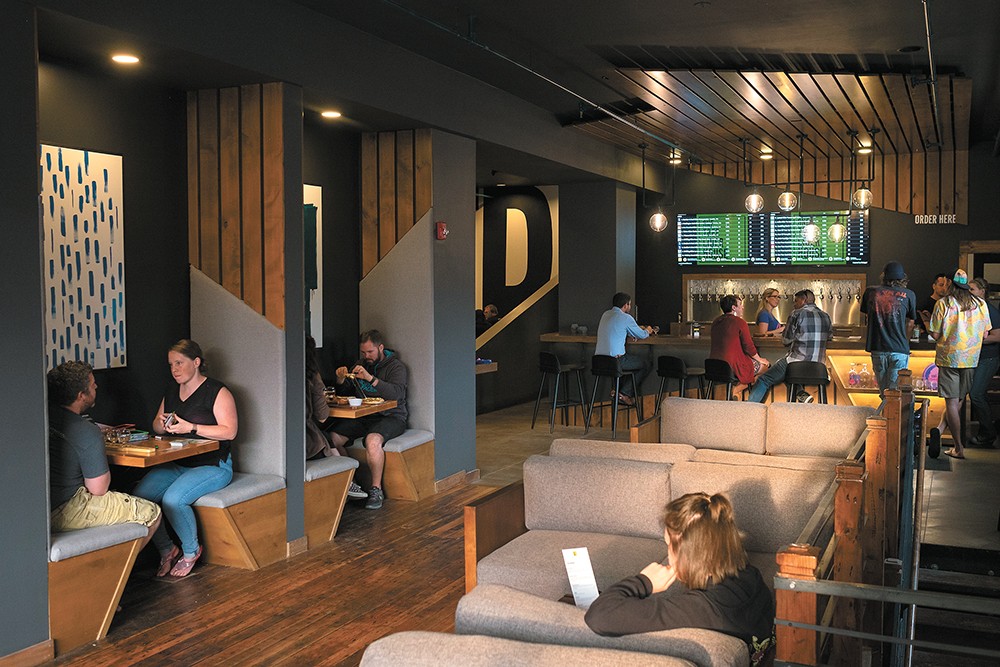 in the west end of downtown Spokane, regional craft cider is now part of the tasty, local mix.

Much to the excitement of One Tree Hard Cider's fans, the Spokane Valley-based cidery announced earlier this year its plans to open a full-service cider house — essentially a taphouse featuring hard cider, and serving food — in the downtown core. If anything indicated the anticipation for the cider house's debut, it was the line of customers wrapping around the block at various times during its first day of business a few weekends ago.

"It's been really exciting to see everyone, whether first-timers or people who trekked out to the Valley," says co-owner and -founder Grant Barnes, who started One Tree with business partner Neal Hennessy five years ago.

"There are not too many places that can open in Spokane and have a line completely wrapped around [the corner] to Orlison, and that was until 9 at night — people were lined up out the door."

One Tree's sweeter (versus dry) and often mixed-flavor hard apple ciders — its lineup includes varieties like huckleberry, ginger apricot, dark cherry and caramel cinnamon, among others — can be found in bottles at many local retailers, and on tap at local restaurants and bars. But the new cider house goes beyond serving just the local maker's offerings. Of the 20 total cider taps, Barnes says at any given time, only five or six will feature One Tree's products, usually a mix of seasonal and mainstay batches, like its popular lemon basil.

"The biggest goal is to choose companies that are independently owned, don't use high-fructose corn syrup, and only fresh-pressed apple juice," Barnes says. "There is so much great cider out there, but really here in the Inland Northwest... there are so many companies here."

Cider lovers and those new to the alcoholic craft beverage's diverse offerings can find batches from Yakima's Tieton Cider Works, Tacoma's Tilted Tree, Pullman's Whiskey Barrel and Seattle's Schilling Hard Cider, among offerings from many other Washington and Oregon cider makers. There are also a few pear ciders, called perrys, on tap. Barnes notes that some of the regional cider makers featured at One Tree have never previously been distributed in the Inland Northwest.

Soon, Barnes says that customers will be able to visit One Tree's website to view a synced tap list showing what's available at the cider house at any given time.

Balance out the typically higher alcohol content of hard cider (compared with beer) with some filling carbs, in the form of four versions of housemade pizzas ($11-$13), featuring locally made Rizzuto Foods pizza dough, and fresh, local toppings (gluten-free crusts are available). Other snacks to enjoy as you sip include tater tots ($5) and cheese bread with marinara ($8). Be warned: One Tree's Bavarian pretzel ($8), which comes with a lemon-basil mustard to dip, is truly as massive as the menu implies.

Although most customers are probably coming to sample its wide regional variety of ciders, One Tree also serves three styles of bottled wine, and a selection of canned craft beer.

One Tree Cider House opens a little more than a year after the local company revamped a tasting room connected to its Spokane Valley production facility. That tasting room has since closed in lieu of the downtown spot, a move that's allowed the cidery to expand its production space to meet increased demand, Barnes says. The new spot, just down the block and around the corner from the Fox Theater, also negates former plans for One Tree to open a tasting room in Kendall Yards. ♦

Speaking of One Tree Cider House

Local chef featured on Food Network, making the most of your tomatoes and other food news