When your sense of safety is violated without warning, learning to trust the world again takes more than personal faith 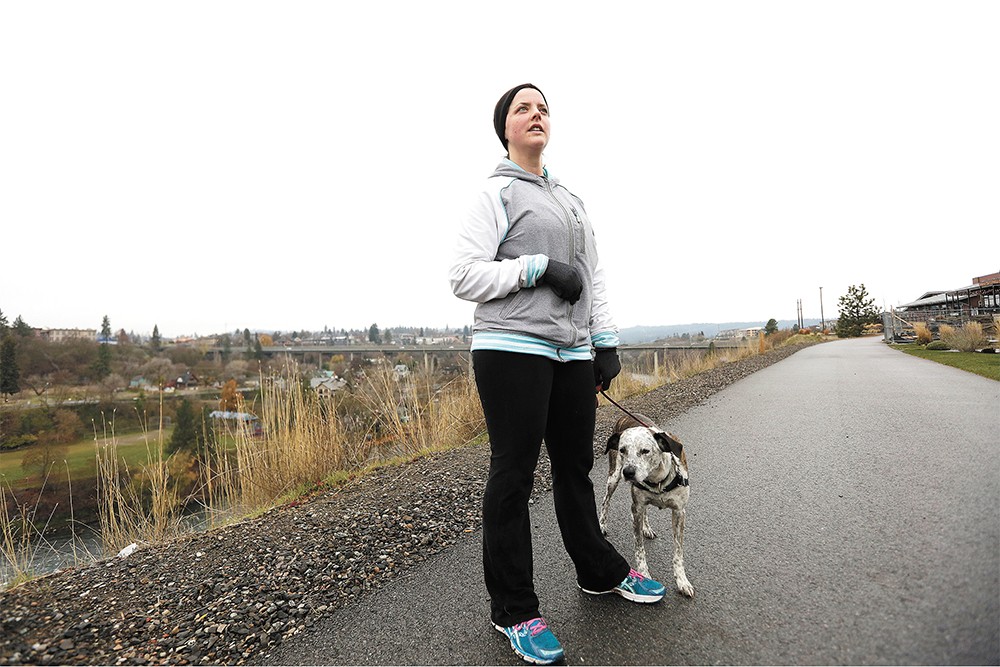 Young Kwak
Emily Gwinn was attacked while running last year, but refuses to let that experience hold her back.

Today's trail report: a grandfather with his young grandson,

a woman walking her dog, a middle-aged bearded man (headphones on, smiling), two large hawks. All strangers, all friendly. No crazies. No injuries.

Lately, I've been making mental notes, cataloguing characters as I take to the trail. I assess potential dangers, keep my pepper spray close, and try to remind myself that there are far more good people in this world than bad. Yet, fear returns. It lingers here, on the slopes that hug the river, on the pavement and in the ponderosa pines; those silent witnesses.

Last October, a stranger on the Centennial Trail assaulted me. It happened so fast that sometimes I wonder if it was a dream. The alleged perpetrator was arrested. My bruises healed, and life moved on, sort of. What I wasn't prepared for was how this event would reverberate in surprising ways. Fear is now a part of my daily life. It reaches out and touches me, without warning, unexpectedly smudging the surface of my psyche.

Being the victim of a violent attack — especially one perpetrated by a stranger — has created a new way of processing potential threats. The plausibility of something "bad" occurring isn't just something that happens to strangers; it happens to me. Now when I hear reports of violence, in the paper or when watching the news, my pulse quickens, my body braces, as if waiting for another blow.

Although more than a year has passed since the event, the recent news of a woman being chased while running on the South Hill's High Drive Bluff sent my pulse racing. As she described to the local news how she ran from a stranger as if running for her life, and he ran after her, adrenaline began to course through my system. I trembled as I read about her experience in the paper, and all the feelings from last October came rushing back.

Mostly, the anger. Why did this happen? Hadn't we, the victims, all followed the asinine female "rules" for outdoor, physical participation? The man who attacked me had also attacked two other women that same morning, one of whom was running with friends. We weren't alone. We had our dogs with us. We had daylight. We were in public spaces. But no amount of preparation can deter a psychotic person set on doing harm.

Random acts of violence feel ever so present today, even when statistics remain hopeful. The chances of something like this happening, even in Spokane, are slim. Stranger-on-stranger violence isn't common, but it took time before I was ready to face the world. Following my attack, I went into hiding. In my eyes, I had the perfect excuse to shy away; I had a new baby at home, who was fussy and who needed me.

The word "reclamation" means both recovery and repossession.

It took me a while to realize that what I needed to move forward (not beyond, because there's no beyond) was to physically move. I had to find a way to enjoy being outdoors again. I needed to strap on my shoes and occupy the spaces I once thought of as my own. They were still mine. I made a decision to not allow that one unfortunate episode, and that sick man, to completely ruin the way I engage with the world.

I've never been a runner, but a good friend with a solid training schedule and many marathons under her belt offered to take me out on the trail one month after my attack. Even though it was winter, we started training together for my first 5K. As of late, we've had five women join us on our weekly runs, and I have completed two more 5Ks. Next year I plan to take on Bloomsday.

While running with friends has proven to be a healthy choice for me, both physically and emotionally, I still find it challenging to train independently. I still hesitate when it comes time to head out alone, but each time I'm on the trail I remember I'm not alone. The faces I meet as I run — both on the trail and off — remind me that we are all in this together. I'm especially thankful for every woman I greet out there, occupying her God-given space. You inspire me with your bravery and courage, your persistence to claim what is yours. Every time we step outside, we take on a certain level of risk, and as women we feel this intensely.

I'm still healing. Even a year later, I'm still sorting out my feelings about the experience. I'm still angry — and that's OK. I take my anger with me. I take my fear, and run it into the asphalt. I burn it into the concrete with each step. And if you happen to see me, say hello. Chances are, I've already added you to my trail report. ♦

Emily Gwinn is an intervention teacher at Lewis and Clark High School, the co-editor of All We Can Hold: A Collection of Poetry on Motherhood, and Executive Director of the LiTFUSE Poets' Workshop in Tieton, Washington.