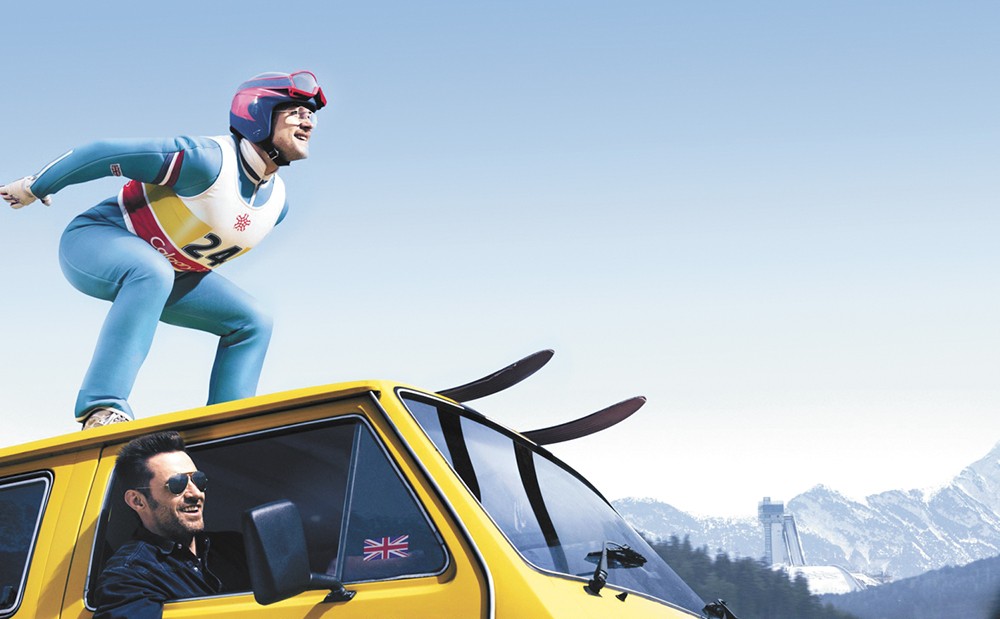 Why are movies about inspirational stories

In a way, that's a question with an obvious answer. Formulas are formulas for a reason: because they work. Hell, movie reviews often have a formula, too, and it would be more than slightly disingenuous not to acknowledge the value of certain basic elements in providing structure and shape.

But what Eddie the Eagle reminds us is that when it comes to a feel-good story like this one, execution of those basic elements matters — especially if it's a true story where an audience already knows the outcome. If you're going to trot out every familiar plot and character beat, you'd better deliver them with some pizazz. Instead, we get:

The "make your protagonist likable" backstory. Eddie the Eagle opens in 1973, showing English schoolboy Eddie Edwards dreaming big about some day being an Olympic athlete, despite a childhood condition that required him to wear a leg brace. As Eddie (Kingsman: The Secret Service's Taron Egerton) reaches adulthood, his enthusiasm doesn't wane even remotely, even as he cycles through various possible sports — in an amusing montage that finds him sampling hurdles, pole vault and javelin, among others — on the way to trying out downhill skiing. Egerton throws himself into Eddie's goofy single-mindedness, doing his best to provide some spark to a milk-drinking nice guy whose single defining quality is his gumption. And mere gumption wears out its welcome after a while.

The obstacles, both benign and malignant. While he's a hopeful for the British Olympic downhill skiing team in the 1988 Calgary Games, Eddie is ultimately rejected by the British federation — the decision that eventually steers him toward the far-less-carefully-overseen ski jumping — because he's not the right sort for a team that needs to maintain an appealing image for sponsors. Class issues pop up more than once in Eddie the Eagle — he's essentially hazed by posh Olympic teammates in Calgary, and denied admission to the team lunch — but the screenplay by Simon Kelton and Sean Macaulay isn't particularly interested in digging into the idea that Eddie was daring to dream bigger than his circumstances of birth should permit. Indeed, they almost make a bigger villain out of Eddie's father (Keith Allen), who repeatedly tries to steer his son towards practical work like plastering, as fathers are required by law to do.

A down-on-his-luck coach with something to prove. This type of character is so prevalent — including Jason Sudeikis playing one in the current release Race — that Hugh Jackman has already played pretty much the same character in Real Steel. This time around he's playing Bronson Peary, a one-time hotshot ski jumper who missed his shot at glory by not maximizing his potential, and is now drinking too much while working as a snowplow operator at the German facility where Eddie starts his ski-jump training. Jackman's an appealing enough performer, but it's hard to shake the sense that he's on autopilot here, growling at Eddie's plucky refusal to quit on his way toward grudging respect for his new student and, naturally, his own shot at redemption.

The training montage. Does Eddie gradually improve after initially demonstrating comical ineptitude? Yes. Yes, he does.

The Big Finish. Eddie the Eagle quite naturally builds towards Eddie's qualification for and participation in the Calgary Olympics — only a year after taking up the sport — where he became something of a folk hero for his sheer enthusiasm at simply being there. That might have been an interesting angle for the movie to take, as Eddie somehow reminded people that the spirit of the Olympics could involve respect for how amazing it was just to be an Olympian. But, just like the notion of Eddie's opportunities being limited by his social class, that idea barely makes a cameo appearance. Eddie the Eagle shows almost as much determination as Eddie himself, but it's a determination not to find a unique through-line for this story. He's an underdog, and we get a chance to root for him, and beyond that, everyone's work is done here.

Pictures of the real-life Eddie the Eagle. We get it: This was a true story. Seriously, whoever is responsible for popularizing this obligatory postscript material has a lot to answer for. ♦

Eddie the Eagle is not showing in any theaters in the area.