Catching cocktail fever at a new bar series for boozehounds. 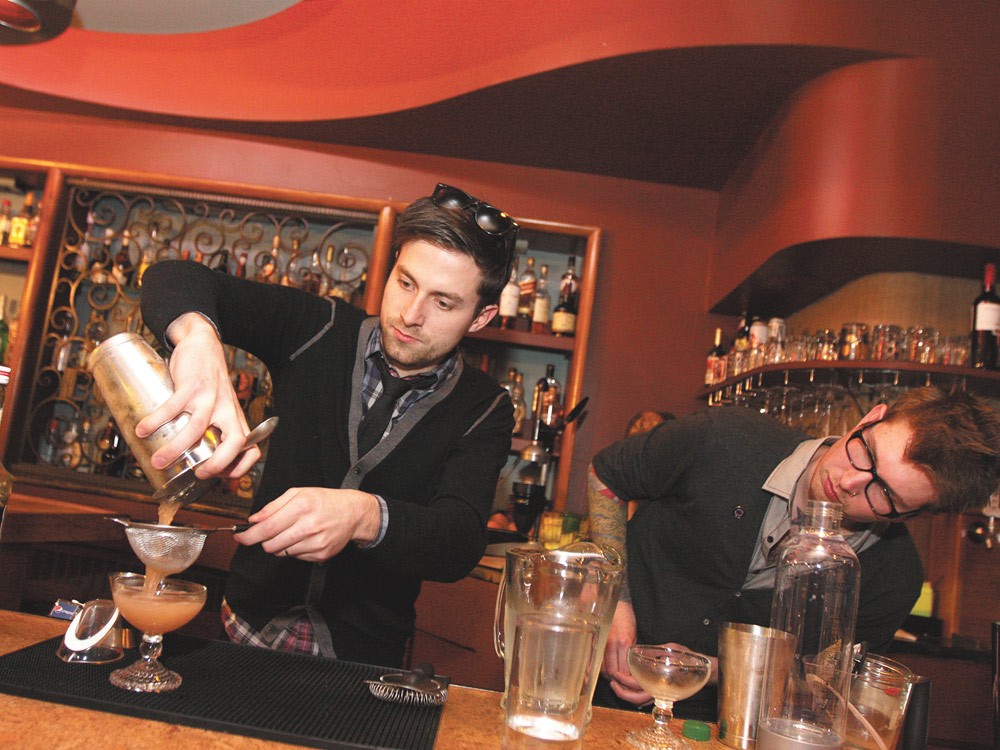 Fifteen people have gathered in north Spokane on Sunday not to discuss turning water into wine, but mash into whiskey, and juniper into gin. The pastor at tonight’s gathering is Shawn Heale, 26, one of the bartenders here at Bon Bon, an upscale cocktail lounge adjoined to the Garland Theater, and tonight he plans to preach the virtues of good cocktail making.

“This is gonna be as pretentious as a wine tasting,” he says by way of introduction to his disciples — some bartenders themselves, some curious neighborhood folks — sitting along the curved counter. “If anyone brought their monocles, now’s the time to whip them out. I’m a huge geek about this, as you’ll find out.”

It’s true. Since 2007, Heale has been obsessed with the science and the history of the cocktail. That’s when a month of vacation from working in the kitchen of a National Geographic expedition ship landed him at the world-renowned Hemingway Bar in Paris, under the tutelage of his great-uncle Colin Field. Heale’s concoctions — like the Book Nerd (a lovely mixture of gin, lemon juice, falernum, mint and Earl Grey simple syrup) — regularly challenge the palates and imaginations of Spokane drinkers.

Tonight’s class, called Cocktails 101, is the first in what Heale hopes will be a monthly series aiming, at first, to lay down the basics of booze and bartending and later, perhaps, to focus more specifically on individual spirits and techniques.

Sisters Becca and Rachel Webb each dropped $35 for the education. Becca, a 22-year-old office manager whose sister identifies her as a rum person, says, “I like Bon Bon and I like cocktails, so I thought it was a perfect combination.”

Tips for the Home Bartender, by Shawn Heale

The Webbs and others listen intently as Heale holds forth on the history of the cocktail — its roots in the punch houses of the 18th century, its rise in the 19th century, its renaissance in the 1980s and explosion in the last decade — and the tools of the trade. He’d prepared an informational packet for everyone, he says, but at 43 pages (including six on ice), it had become so long that he had to send it off to a printer, so it wouldn’t be available tonight.

Heale is clearly jittery. He smacks his open hand with his fist as he searches for his next anecdote, nervously adjusts the position of a muddler on the bar, and declares frequent smoke breaks. But his congregation is into it, laughing at his jokes (including a salacious nod to 19th-century bar legend Harry Johnson) and hollering when he pulls out his bag of tricks (like a black plastic cocktail smoker that looks like Darth Vader’s enema kit).

Aaron Mock, 32, the new bar manager at downtown’s Sapphire Lounge, is impressed. Though he’s just taken over one of the city’s most progressive cocktail lounges, he considers himself more of “an IPA guy,” and Heale is opening his eyes to the spirits world.

“I’m an idiot. I’ve never heard of [some of this stuff] before,” he says. “I could make you a Long Island, no problem. Some of this shit’s a little crazy…”

Topher Webber, a 23-year-old computer repairman for the Moody Bible Institute, came tonight out of an interest in the craft movement.

“I like whatever I do to be exceptional,” he says, “and not what everyone else is doing.”

Webber looks nervous as Heale’s class enters the hands-on phase. The bartenders have set up three stations throughout the room, and the students now have to demonstrate their expertise in mixing, shaking and pouring. Webber competently measures out the whiskey, grapefruit juice and raspberry syrup for a Blinker, but he freezes for a moment when it comes time to separate the two mixing cups, which are melded together by the icy vacuum created inside. Heale steps in and dislodges them with a couple of quick hand motions. The others at his station give hearty hurrahs as Webber pours out an icy pinkish concoction.

Gary Cooper, the head bartender at the Sapphire, says he learned a few things from Heale tonight, like the difference between pot and column stills, and the history of certain classic drinks. “He’s doing great,” Cooper says. “He settled right in.”

“I’ll be more put-together next time,” Heale says toward the end of the night, mentioning a few anecdotes he forgot to share. “The nice thing is, I’ve got enough people on the waiting list for this one to do a couple more.” Amen.

The next Cocktails 101 class is scheduled for April 8. Check Facebook.com/BonBonSpokane.