With the Festival at Sandpoint approaching quickly

, there's even more reason to venture up to Sandpoint; that is, if the food alone hadn't already brought you there.

The seasonal vibe of the vacation town is probably best captured at the Oak Street Court (317 Oak St.) with folks like Amie Wolf, the owner of Baconopolis, just one of the food carts found at this location.

Wolf spent 13 years as a vegetarian until she was seduced by the pork side of life.

"Bacon was my gateway meat," she jokes.

Baconopolis' bacon-centric menu features local Woods Meats in a variety of configurations. A classic BLT ($6.50) gets heat with chipotle mayo and goes gluten-free in a lettuce wrap ($6). Grilled French bread and bacon is the base for all sandwiches ($7.50), like a traditional tuna melt and the Social with Brie cheese and green apple slices. The Fig n' Pig features homemade fig jam and goat cheese (and bacon, of course).

For breakfast, try a sandwich with an egg fried in coconut oil, gooey bacon jam, avocado and bacon ($7).

Starting Baconopolis, says Wolf, whose background is in marketing and publishing, enabled her to stay in Sandpoint when her Coldwater Creek job disappeared. 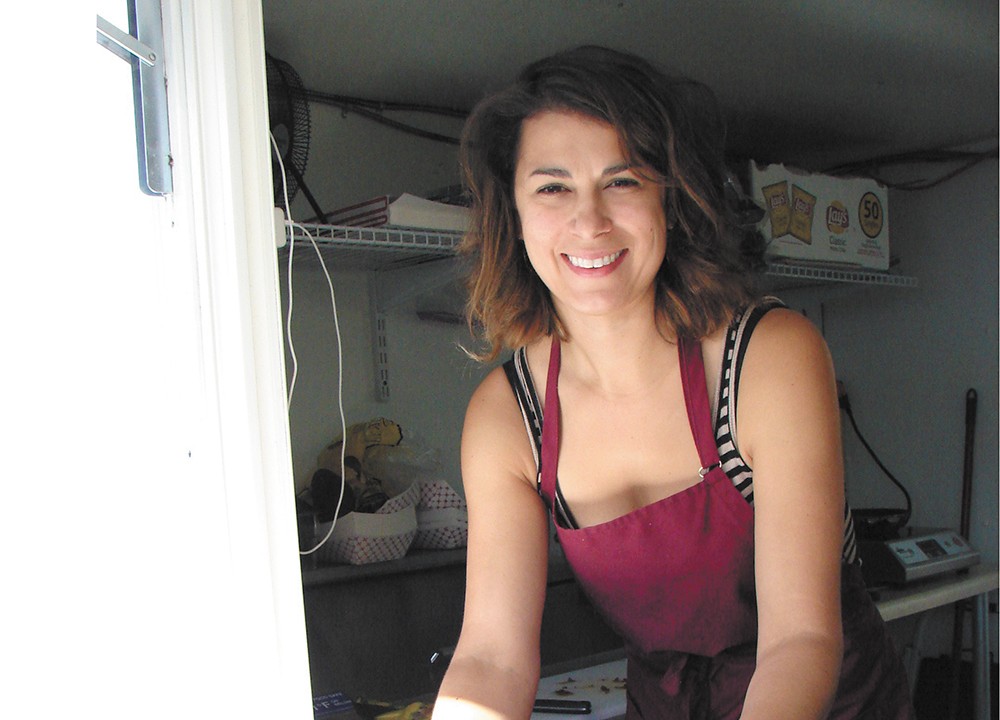 Although many food trucks vacate by early fall, other businesses salute the seasons with adaptive menus. Recently opened Panhandle Cone & Coffee, for example, plans to expand in the fall with soups and homemade bread. In the meantime, they have their hands full cranking out baked goods like scones and cinnamon rolls ($3) — a light breakfast alongside their Sandpoint-based Evans Brothers coffee.

The real draw, at least in summer, is homemade ice cream combining unusual flavors like sweet basil and pine nut or wildflower honey and lavender. Beat the heat with a scoop ($3) or waffle cone ($4) of peppermint fudge, orange with dark chocolate or their best-selling salted caramel with brown butter cookie.

The inspiration for their flavors, according to Jason Dillon, who co-owns Panhandle Cone & Coffee with wife Stephanie, comes from trial and error, experimentation and other artisan shops like Portland's Salt and Straw, Ohio-based Jeni's Splendid, and San Francisco's Bi-Rite Creamery.

Can't decide between ice cream or coffee? Have both in an affogato: two shots of espresso poured over ice cream ($4.50). Try their huckleberry with a little tang of buttermilk.

Rather make your own huckleberry ice cream (or frozen huckleberry margaritas, waffles, jam, etc.)? Schweitzer Mountain's Ninth Annual Huckleberry Festival on Aug. 2 has guided tours and a shuttle to and from picking sites; just bring your empty bucket. Fuel up first at the pancake feed ($8.95/adults, $5/kids). In between picking berries, hang out in the village and listen to live music, peruse the crafts fair, or sign up for any number of activities such as the color fun run, chairlift ride, climbing wall or zip line (see website for schedules, fees).

When cruising by car — as opposed to boat — a favorite way to see the splendor of Sandpoint and the surrounding area is to take the scenic lakeshore drive east and south along Highway 200. For seasonal dining with a waterfront view, check out Hope for the Hope Marketplace inside Outskirts Gallery, The Floating Restaurant, Sweet Lou's or Ivano's Ristorante.

If you make it as far as Clark Fork, time your visit for dinner theater put on by the National Dinner Theater Institute and hosted by the Squeeze Inn. Every Sunday and Monday through August 24, NDTI puts on a 30-to-45 minute production like Party Wheel, a game show melodrama (Aug. 2-3). The Squeeze Inn is open daily with an eclectic menu — tikka masala, homemade pasta and pizza, duck breast, weekend Basque specials — so if you don't make it out for a play, definitely put this on your to-do list before the snow flies. ♦